We Asked the US Navy: What Will Replace the F/A-18E/F Super Hornet and EA-18G Growler? 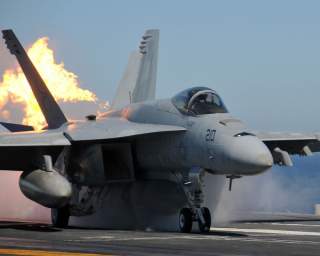 The U.S. Navy’s analysis of alternatives (AOA) for its next generation replacement for its F/A-18E/F Super Hornet fleet is well underway. The AOA will be roughly a year-and-a-half long, but the process is in its infancy. While the Next Generation Air Dominance (NGAD) program will aim to fill the gap in the carrier air wing when the Super Hornet and EA-18G Growler airborne electronic attack aircraft retire, the service does not yet have any concepts emerging from that on-going analysis.

“There are no concepts yet that have come up,” Rear Adm. (Upper Half) DeWolfe Miller, the Navy’s director of air warfare told The National Interest during an interview in the Pentagon on Aug. 23. “So myself and deputy undersecretary of the navy for airwarfare— DASN (Air) [Gary Kessler]—are the two co-chairs of that AOA.”

The Navy’s AOA is looking at a broad range of concepts that would fill the void left by the Super Hornet and Growler in the 2030s using “set-based design methodology,” Miller said. The Navy and the Air Force will conduct two separate AOAs for their respective sixth-generation fighter efforts that will likely develop two separate solutions for their respective missions. That being said, the two jets could share technology and they will be able to operate together seamlessly. “We will leverage each other on the technology and we’ll leverage each other on the interoperability,” Miller said. “So we’ll be informed of what each others’ efforts are doing.”

The process that the Navy is using essentially projects the carrier air wing out to the future using its current design. To examine the gap left by the F/A-18-series airframe, the Super Hornet and Growler would be removed from the air wing and substituted with a range of new concepts, Miller explained. “What they’ll do is take our air wing of that timeframe and they’ll remove the Super Hornets and they’ll remove the Growler, and they’ll say: ‘OK, what are the capabilities that we need to provide. That’s when they’ll start to come up with various options that they’ll bring forward to us.”

While the NGAD will be a “follow-on” to the Super Hornet and the Growler, it will not simply be a new version of the F/A-18E/F aircraft, Miller said. The Navy will have to understand exactly what capabilities the air wing needs, what the carrier strike group needs and what the overall U.S. military’s joint forces will need from the new fighter. As such, it is not possible to address questions of stealth, performance or weapons at this stage. “They’re going to take a look at what the air wing needs and how that air wing fits into the overall joint fight,” Miller said, adding. “It’s in the embryonic stages here of starting.”