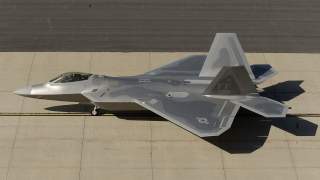 The United States Air Force’s fleet of stealthy Lockheed Martin F-22 Raptor fifth-generation air superiority fighters is proving to be invaluable over the skies of Iraq and Syria.

While the powerful twin-engine stealth fighter does not have to worry about dealing with an ISIS air force, the aircraft does offer the USAF the ability to operate inside potentially dangerous areas protected by advanced Russian-built air defenses such the S-300V4 and S-400.

“I'm flying that over here, and I got a little bit of experience,” Lt. Gen. Jeffrey Harrigian, commander of U.S. Air Forces Central Command, told reporters at the Pentagon on May 24. “I've been able to leverage—and, quite frankly, I've been very fortunate to have it over here, because it's given me a capability that's been incredibly important to my ability to get back into the airspace, particularly in Syria, as we've needed to gain a better understanding of what the Syrian and Russian IADS [integrated air defense systems] were doing.”

One example Harrigian cites was in the aftermath of the Navy’s Tomahawk cruise missile strikes against the Syrian regime on April 6 earlier this year where the Raptor was the only American aircraft flying over that war-torn nation.

“Perfect example is, after the TLAM strikes, we had to work our way back into the airspace,” Harrigian said. “I used the F-22 to help take the initial steps to get me in a position that would allow other assets then to come into the airspace.”

During those initial missions after the Navy’s strike, the Air Force used the Raptors to secure the airspace, but Harrigian points out that the jet also carries 250-lbs Small Diameter Bombs that can be used to strike surface targets.

The F-22’s potent array of sensors has also proven to be extremely useful during this air campaign.

“The other capability that has been very helpful for me is, while we'd like to leverage our AWACS and our ground radars for air domain awareness, the F-22 gives me a capability in real time to support those efforts in ensuring I have the ability to de-conflict in real time, should the Russians or the Syrian air force decide to present themselves in a manner that's a conflict for us in the air,” Harrigian said. “And so, in that environment, the F-22's ability to fuse information, understand where our friendly forces are, what the Syrian air force or the Russian air force are executing, and then provide that information to the joint force—it's frankly been unmatched.”

Harrigian noted that he has personally flown the Raptor in performing both those roles. Indeed, while Harrigian did not mention it during his press conference, in his earlier years during the early 2000s, the General setup the 43rd Fighter Squadron—the formal training unit that trains all Raptor pilots—alongside a handpicked cadre of elite instructor pilots.

“Having flown in the airplane in both of those roles, I'm going to tell you there's no better platform to do that,” Harrigian said. “And it's done an incredible job at providing me, as the CFACC [Combined Forces Air Component Commander], that capability for not only air domain awareness, but also supporting our folks on the ground.”

That’s a far cry from the minimum 381 aircraft requirement that the Air Force stated when the Raptor was still in production. Cancelling the F-22’s production run after only 187 production aircraft were built will continue to haunt the Air Force well into the future.