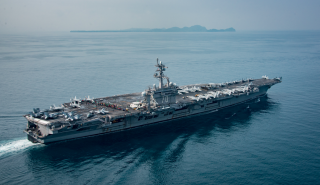 North Korea’s ballistic missile program dates back to 1965, when leader Kim Il-sung decided that, were war to break out, North Korea would need a way to hit U.S. bases in Japan. Thus began a fifty-two-year quest for long-range missiles which culminated in the May 12 launch of a Hwasong-12 intermediate-range ballistic missile. The Hwasong is just the latest in a long line of weapons designed to put even the most distant of Pyongyang’s enemies at risk.

North Korea’s missile program didn’t appear out of nowhere, but is the result of cooperation between Pyongyang, and—of all places—Cairo. The two countries were both interested in gaining a long-range missile capability, and Egypt transferred two Scud B missiles to its Asian ally sometime between 1976 and 1981. This was the seed from which the modern missile program originated. By 1986 North Korea was building missiles of its own—called Hwasong 5—complete with a 10 to 15 percent increase in range (198 miles).

Once the Hwasong 5s were in production, North Korean scientists and engineers quickly moved to improve it, resulting in the Hwasong-6. The new missile had roughly the same dimensions as its predecessor but had its range increased to 310 miles, enough to hit all of South Korea. Hwasong-6 could be equipped with two-thousand-pound high explosive, cluster or chemical warheads. Hwasong-6 was eventually supplemented by Hwasong 7, which had a range of 621 miles.

As for accuracy, experts believe the Hwasongs have a circular error probable (CEP)—the radius of a circle within which half of missiles fired would land—of 1,600 to 3,200 feet. In other words, if ten Hwasong-7s were fired at Sasebo Naval Base in Japan, five would be expected to fall within 1,600 to 3,200 feet of their assigned target. That is obviously far from pinpoint accuracy, but at last here was the missile that fulfilled Kim Il-sung’s goal of striking U.S. bases in Japan.

Except not really. The Hwasong 7 could only reach parts of Japan, leaving out such critical locations as Yokota Air Base outside Tokyo, nearby Yokosuka Naval Base, and U.S. Air Force and Marine Corps bases on the southern island of Okinawa. Thus by 1994 North Korea had developed the No Dong, its first medium-range missile.

A third class of North Korean missiles is the KN-02, also known as the “Toksa.” The KN-02 is a homebrewed copy of SS-21 “Scarab” short-range ballistic missiles supplied to Syria by Russia and then passed on to North Korea. The KN-02 has a 1,069-pound warhead and a range of only 105 miles. As such, it would be used to attack tactical—and possibly political—targets south of the DMZ. The KN-02 allegedly has a CEP of roughly nine hundred feet, making conventional warheads a more viable option than with the No Dong.

Despite North Korea’s enthusiastic research and development of missiles, the Hwasong 5–7 series rockets, the No Dong, and KN-02 represent the only missiles known to be truly operational—that is, usable in a conflict in any useful numbers. As of 2006, there were an estimated six hundred Hwasong 5–7 missiles and 450 No Dong missiles in North Korea’s arsenal. In 2014, an estimate put the number of KN-02s at one hundred. Could North Korea have even more missiles than this? A modest increase is possible but anything greater is unlikely: starting in 2006 Pyongyang ramped up research into even longer-range missiles and its nuclear-weapons program, and a country with a GDP of $16 billion has limited resources. This also means that, although the country can hit targets as far away as Okinawa, locations such as Guam, Hawaii, Alaska and the continental United States are likely safe—for now.

How many of these missiles have nuclear warheads? In 2016, South Korea assessed the North as having the ability to place a nuclear warhead on a No Dong. That is not a universally held opinion. At issue is the North’s ability to create a reliable nuclear weapon small enough to fit on a No Dong and capable of surviving reentry. Experts also believe that in emergencies the DPRK could place a nuclear weapon on a Taepodong missile with sufficient range to hit the continental United States, but the warhead would almost certainly not survive reentry and it would be anyone’s guess where it would land. For now, the answer to the question of how many nuclear missiles North Korea has is possibly some, but possibly none at all.

North Korea’s current missile capability is more modest than commonly believed. Still, its nuclear and missile programs have made an astonishing level of progress for an impoverished country. It is developing five new missile designs concurrently: the Pukkuksong 1-2 medium-range missiles, the Musudan medium-range missile, Hwasong-12 intermediate-range missile, and KN-08 and KN-14 intercontinental ballistic missiles. It has openly displayed a nuclear warhead design and re-entry vehicle tests. It is probably inevitable that within the next five to ten years it will have an ICBM capable of striking the United States—and a warhead to go with it. Whether the United States will accept North Korea as a nuclear peer is another question altogether.