What Comes after Airstrikes on Syria? 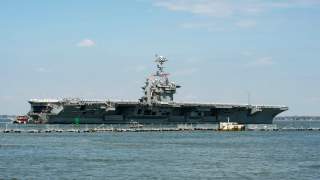 Via Twitter, where his candor is often remarkable, President Donald Trump has already warned that missiles “will be coming.” If so, one hopes that the president and his advisers also have a clear strategy for what to do after the missiles slam into their targets. A sustained barrage might inflict substantial damage on Assad’s air force, such as the Mi-8 Hip helicopters apparently responsible for the chlorine attacks last Saturday. The United States and its allies should deprive Assad of his air force, yet it would be hard to call this justice for a war criminal with so much blood on his hands.

Instead, if the president has already made a decision to use force, it should mark the beginning of a new effort to exert maximum pressure on the Assad regime, as well as its sponsors in Moscow and Tehran, in order to prevent them from achieving the objectives that they have pursued by means of relentless atrocities. This would be a better approximation of justice while doing far more to advance U.S. interests in the Middle East.

So far, President Trump has not indicated whether his determination to punish Assad has led to him to reconsider his informal six-month timeline for withdrawing U.S. troops from northeast Syria. Facing skeptical reporters, White House Press Secretary Sarah Huckabee Sanders explained there is nothing inconsistent about targeting the regime with airstrikes and then bringing home the troops. To be sure, having boots on the ground in Syria has no bearing on the ability of U.S. air and naval assets to deliver their firepower. Yet if Trump wants to put the same kind of maximum pressure on Damascus that he has on Pyongyang, then the troops need to stay—not because they are going to join the fight against Assad, but because they play a critical role in shaping the balance of power in Syria.

Before its descent into chaos, Syria pumped around 385,000 barrels per day of oil, almost all of it from fields in the country’s northeast. The U.S.-led coalition that dismantled ISIS now controls most of that real estate, although Hezbollah and other Iranian-backed militias recaptured some key terrain, such as the city of Deir Ezzor.  A precise estimate is difficult to offer, but 80 percent or more of the oil seems to be in coalition-held areas, not to mention substantial amounts of gas.

Bashar al-Assad desperately wants the oil back. Syria earned $5.5 billion from oil exports in the last year before the war. Its profits provided about one-fifth of the regime’s annual revenue. Now Syria borrows billions from Iran to import oil instead. The war also shattered the rest of the Syrian economy, with the IMF estimating that its dollar-denominated GDP had plunged 75 percent by the end of 2015.

Were U.S. troops to depart, the Syrian Kurdish force, known as the YPG, would inherit northeast Syria—although its position would be tenuous. After crushing YPG forces in the Kurdish enclave of Afrin in northwest Syria, Turkish president Recep Tayyip Erdogan has announced his intention to take the fight to the YPG in northeast. Rather than fighting both Erdogan and Assad, the YPG is likely to resume the partnership it forged with Damascus in the first years of the war.

In exchange for a measure of autonomy and a cut of the profits, the Kurds would let Assad would reclaim his oil.

A wealthier Assad would be stronger, but wouldn’t bring peace or stability to Syria. More likely, his war to grind down remaining opposition strongholds would be at least as bloody as the siege and bombardment of East Ghouta that culminated in the recent chemical attacks. Thus a withdrawal of U.S. troops would bring neither accountability for Assad nor an end to the horrors.

Finishing the fight with ISIS should still be the troops’ mission, yet their presence will set the conditions for a maximum pressure campaign by other means, especially economic ones. Before his departure, Secretary of State Rex Tillerson announced that neither the United States nor its partners would provide funding to rebuild any area under the control of Assad. The United States needs to take this policy a step further by laying the groundwork to impose sanctions on any firm that engages in reconstruction work on behalf of the Syrian government or other sanctioned entities. This may not deter Iranian firms or Russian enterprises already under sanctions, but Chinese companies may not want to risk their access to Western economies.

The United States and EU should also re-evaluate the effectiveness of the sanctions they imposed in the early days of the war. As in the case of North Korea, the common assumption that there is nothing left to sanction may prove quite misleading. For example, Syrian banks still have access to the global interbank messaging service known as SWIFT. In the years prior to the 2015 nuclear deal, the United States did tremendous damage to the Iranian financial sector by forcing it off of SWIFT. Syria’s six state-owned banks and fourteen private banks have already been on the sanctions list for years; their expulsion from SWIFT is long overdue. (Since SWIFT is headquartered in Belgium, expulsion would require EU action.)

Another vulnerability to explore is the source of Syrian oil. In December 2013, an investigation by Reuters exposed a network of companies who illicitly provided the regime with 17 million barrels of crude oil, which Syrian refineries then processed. The next year, the United States and EU sanctioned both the refineries as well as key importers. Yet citing a “classified Western intelligence report,” one journalist wrote that imports financed by Iran continued into 2017 and that Russia provided shipments as well. While sanctions require a solid basis in evidence, not just intelligence leaks, one has to ask where Syria is getting the oil it needs to run a war. Furthermore, the goal is not simply to sanction the importers, but to stop them from doing business. In the case of North Korea, the United States sanctioned dozens of ships and shipping firms earlier this year. Similar action may pay dividends when it comes to Syria.

Another critical import for Syria is manpower, especially the thousands of foreign Shia militiamen that Iranian commercial airlines ferry into the country for combat tours. After the conclusion of the 2015 nuclear deal with Iran, some of those airlines began to place multibillion dollar orders for hundreds of new commercial jets from Boeing and Airbus. The nuclear deal permits such purchases on the condition that all items are “used exclusively for commercial passenger aviation.” For fifteen months, the Trump administration has taken no action to block the aircraft sales, apparently because it remains unsure of how to balance national security considerations with the potential damage to Boeing’s bottom line. One hopes that the Douma chemical attack will clarify for the White House that this is an instance in which national security should prevail.

On the diplomatic front, one hopes that the latest atrocities have dispelled the administration’s illusions about Russia’s role as a partner for peace in Syria. By most accounts, incoming Secretary of State Mike Pompeo does not share Rex Tillerson’s hopes for cooperation with Moscow, nor is John Bolton so inclined. At the UN, Amb. Nikki Haley should continue her efforts to keep Russia on the defensive by forcing it to veto every Security Council effort to hold Assad accountable. Embarrassing the Kremlin may not change its behavior, but it does play an important role in marshalling European support for U.S. initiatives.

While putting in place a maximum pressure campaign, the Trump administration should constantly bear in mind that Syria policy is not just about Syria; rather, it is an essential part of the broader strategy for pushing back against Iran that the president laid out last October. The first of that strategy’s four pillars was a comprehensive effort to “counter the regime’s destabilizing activity and support for terrorist proxies in the region.” Yet until the Douma attacks, the president has consistently framed U.S. policy toward Syria as a matter of defeating the Islamic State and nothing more.

Considered in isolation, a policy of maximum pressure on Syria may seem like a humanitarian effort whose growth has would distract the United States from national security objectives. However, in the context of strategic competition with Iran, it is indispensable. When protesters in Tehran are chanting, “Leave Syria, think of us!,” it becomes clear why the United States should raise the cost of Iranian intervention. In addition, Iran’s currency, the rial, is now imploding, so the Tehran may not be able to absorb much more punishment. Critically, the worse its position comes, the less able it will be to resist American demands to fix the nuclear deal, whose sunset provisions, weak inspections and blind spot on ballistic missiles are all major flaws.