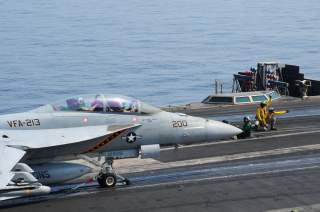 The U.S. Congress is taking action to address the United States Navy’s strike fighter shortfall by adding more Boeing F/A-18E/F Super Hornets to the fiscal year 2018 budget than was requested by the Pentagon.

The Navy had an unfunded requirement for 10 additional Super Hornets above the 14 aircraft that it had requested. Thus far, the House Armed Services Committee (HASC) and the House Appropriations Committee’s Defense subcommittee (HAC-D) have added money to fund those additional aircraft and it is likely that the Senate will follow suit.

The HAC-D has appropriated $1.8 billion for 24 F/A-18E/F Super Hornet—10 more than the Pentagon’s budget request. The HASC has provided for an additional $739.0 million to procure 10 additional F/A-18E/F Super Hornets to support the Navy’s unfunded requirement. Assuming the Senate follows through, the additional jets will help recapitalize the dwindling naval aviation strike fighter fleet, which is suffering from a severe readiness shortfall as a result of aging aircraft that are urgent need of refurbishment.

The HASC also took particular interest in the Naval Reserve’s aging fleet of 33 legacy Boeing F/A-18A+ Hornets which are more than 30 years old. The antiquated aircraft have systems that render them incompatible with the Navy’s current active-duty air wings. “The committee remains concerned over the health and readiness of the Navy Reserve combat air fleet,” the HASC version of the 2018 National Defense Authorization Act (NDAA) reads.

“The committee is aware that the Navy Reserve tactical aviation squadrons provide critical adversary support and strike fighter weapons training to Active Duty forces, and must maintain a high mobilization readiness level as the sole strategic reserve available to the U.S. Navy.”

The HASC believes that the F/A-18A+ is no longer able to provide a useful capability to deploy onboard an aircraft carrier. But more problematically, the Naval Reserve jets are often used to simulate enemy “Red Air”—the HASC is concerned that the legacy Hornet is no longer capable of replicating the capabilities of advanced threat aircraft such as the Russian-made Sukhoi Su-30SM Flanker-H, Su-35S Flanker-S or Chinese Shenyang J-15 Flying Shark.

“The committee believes this could impact the ability of these two Navy Reserve squadrons in meeting requirements for advanced strike employment, as well as simulating current advanced threat aircraft,” HASC version of the NDAA reads.

“The committee also believes these legacy F/A-18A+ aircraft need to be recapitalized with next generation capability in order to provide realistic threat representative training for naval aviators and to maintain operational readiness that provides a relevant and deployable backstop to the Active Duty air wings.”

As such, the HASC is ordering the Department of the Navy to draw up plans to replace the F/A-18A+ aircraft in naval reserve service before the end of the year.

“The committee directs the Secretary of the Navy, in coordination with the Chief of the Navy Reserve, to provide a briefing to the House Committee on Armed Services, not later than December 1, 2017, on its plans to recapitalize the Navy Reserve combat air fleet,” the HASC NDAA mark reads.