China, India and Water Across the Himalayas 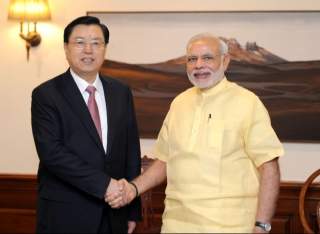 While everyone’s anxiously watching and analyzing the events unraveling in the South China Sea, there’s another resource conflict involving China that also deserves attention. In the Himalayas, China and India are competing for valuable hydropower and water resources on the Yarlung Tsangpo–Brahmaputra River. The dispute offers some important lessons for regional cooperation (on more than just water), and highlights what’s at stake if China and India mismanage their resource conflict.

The resource conflict began on June 11, 2000, after a natural dam-burst in Tibet caused a flash flood that resulted in 30 deaths and serious damage to infrastructure in the northeastern state of Arunachal Pradesh. Some Indian government officials believed the flood was intentionally caused by China, even suggesting China would weaponize or interrupt water supply to leverage over India. The issue dominated reporting on China, but later subsided after satellite imagery confirmed the natural dam. Later in 2002, China and India signed their first Memorandum of Understanding for the provision of hydrological information during the monsoon months, previously discontinued after their 1962 border war.

The issue gained serious traction in 2008, when the Chinese government announced plans to begin construction of the Zangmu hydroelectricity dam. Located on the middle reaches of the Yarlung–Tsangpo River, the dam was perceived by many Indian observers as the beginning of a major river diversion project that would dry up the Brahmaputra River. Speculation and suspicion were further stoked by Chinese refusal to divulge information deemed “internal matters” and conflicting information released by government officials. Indian fears drove some commentators­—led by Brahma Chellaney—to warn of a coming water war over the river; suggesting a river diversion would be tantamount to a declaration of war. The contentious issue soon sparked concern in the Indian Parliament, and became a priority in high-level bilateral exchanges with China. In its exchanges, India sought reassurances and pushed for more extensive water data sharing practices (negotiating an extra 15 days of data).

The crux of the resource competition thus relates to mass dam building and diversion plans. With the Yarlung Tsangpo representing 79 gigawatts of hydropower potential (more than enough to power NSW, ACT and South Australia combined), China is planning the construction of 20 hydroelectricity dams along the river. In addition to these dams, China is also considering a potential Grand Western Water diversion plan (redirecting water to the dry north). India fears upstream China will ‘turn off the tap’ that makes up 30% of its water resource. However, despite calls for greater transparency and consultation, India is also racing to construct hydropower dams on the Brahmaputra River. While India’s dam building drive is primarily motivated by a desire to take advantage of the river’s hydropower potential, the dams also help to consolidate India’s territorial claim on the contested border state of Arunachal Pradesh (known as ‘South Tibet’ in China).

Despite Indian alarm, there’s little reason to fear a water war. Numerous facts indicate Chinese activities won’t impact river flow. For example, Chinese dams have been confirmed as run-of-the-river—they don’t store water). China has also dismissed plans of river diversion due to high economic costs and environmental risks. On top of this, Chinese leaders have reiterated that they don’t want to antagonize their closest neighbors. Perhaps the most convincing rebuke of the water war myth is the scientific evidence that shows China has limited control of India’s water. Contrary to popular belief in India, up to 70% of the Brahmaputra’s water resource comes from rainfall collected in India.

First, much of India’s alarm was unwarranted. The information vacuum created by the Chinese Government’s refusal to divulge details of ‘internal matters‘ combined with inconsistent messaging gave rise to worst-case scenario speculation and fear in India. The dispute revealed the importance of transparency for guiding an informed conversation, not defined by historical biases. The incident showed that transparency can save time that would be otherwise wasted on reassurance and crisis management. China and India could devote efforts to developing goodwill and relations needed to establish joint scientific research projects in the Himalayan region, and more extensive water-data and information sharing norms.

Second, how India and China manage their domestic water and energy shortages has wider implications for the economic, environmental and social stability of the world’s two most populous countries. The dispute will test the strength and maturity of China and India, by requiring them to look past their strained history and the nationalist sentiments associated with it. Their response will set a precedent for cooperation in other areas of the Sino-Indian relationship, as well as transboundary resource management more broadly.

Finally, while a lot of mistrust exists between China and India—not least from its 1962 border war and its unresolved border dispute—cooperation in water data-sharing, dam building planning and joint scientific research projects offer less politically charged opportunities where deeper people-to-people relationships can be created. Such initiatives would not only improve the two countries’ perceptions of each other, but also help to develop a common language and understanding of the regional resource and environmental challenges.

India and China’s contested land border and the associated political sensitivities remain a serious barrier to bilateral cooperation on regional issues. However in the area of transboundary water data sharing, China is showing an increasing willingness to seriously consider and reassure the concerns of downstream countries. While this is promising, uncertainty about China’s commitment to regional cooperation persists, particularly because China’s willingness to talk about transboundary water issues remains subject to the political climate and is often used as a political tool for negotiation.

The water dispute combines domestic issues of resource scarcity and economic security with complex international relations challenges of transboundary resource management and bilateral Sino–Indian relations. How these issues intersect will be important for the region and its future. The water dispute comes at an interesting time where China and India’s relationship is developing within a shifting regional power dynamic. It’s certainly worth watching.