What Does the Pentagon Think about China's Rising Military Might? 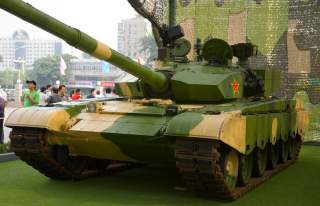 It’s that time of year again. The U.S. Department of Defense (DoD) has just released its annual report on Chinese military and security issues. It documents important trends in this area using information often publicly available nowhere else. Amid the usual dump of fascinating data, several broad themes stand out:

- It has already achieved progress that the vast majority of militaries could only envy.

- In recent years, it has consolidated core capabilities.

- But is also developing a new outer layer of power projection and influencing capability, becoming far broader-ranging in operational scope.

- Efforts are underway to make the PLA a great power military with global reach, even if it will not be globally present or capable to U.S. standards.

In what follows, I survey the report’s key findings before assessing its limitations, and its contributions writ large.

In the Near Seas, China is using low-intensity coercion to further its position in maritime and territorial disputes. Overall, DoD assesses, “PLA ground, air, naval, and missile forces are increasingly able to project power to assert regional dominance during peacetime and contest U.S. military superiority during a regional conflict.” Among the most sobering shifts is the erosion of many of Taiwan’s traditional defense factors by concerted PLA development and an official defense budget alone that is ten times greater than Taiwan’s. In a likely testament to identity factors that render cross-Strait issues complex, Taipei now spends only ~2% of GDP on defense, a target level for European members of NATO who face no such existential threat.

In peacetime, Beijing uses incremental salami-slicing tactics to assert effective control over contested areas and features. In this regard, DoD highlights Chinese efforts to prevent Philippine resupply of Second Thomas Shoal, and mentions Luconia Shoals and Reed Bank as potential future flash points. To facilitate such gains while avoiding escalation to military conflict and direct U.S. intervention, ships from the consolidating China Coast Guard (CCG) man the front line. The PLA Navy (PLAN) remains ready back stage in a monitoring and deterrent capacity. Rapid South China Sea island reclamation stands to facilitate even more continuous presence for all such forces.

China’s “whole-of-government” approach to sovereignty assertion, and the escalatory dangers therein, were underscored in 2014 when China National Offshore Oil Company began drilling with its HYSY-981 oil rig roughly 12 nautical miles (nm) from an island disputed with Vietnam and only 120 nm from Vietnam’s coast. There China announced a security radius six-times the 500 m safety zone allowed by the UN Convention on the Law of the Sea. It used “paramilitary ships” (CCG and fishing boats) to fend off Vietnamese vessels with water cannons and ramming, while PLAN ships conducted “overwatch” and PLA fighter and reconnaissance aircraft and helicopters patrolled above.

In the Far Seas, Beijing is gradually extending its reach and influence with growing power projection capabilities and soft power influence. “The PLA’s growing ability to project power,” DoD judges, “augments China’s globally-oriented objectives to be viewed as a stakeholder in ensuring stability.” In 2013-14, China sent its “first” submarines to the Indian Ocean. A Shang-class (Type 093) nuclear-powered attack submarine conducted a two-month deployment. ASong-class diesel-electric submarine made the first foreign port visit by a PLAN submarine, calling twice on Colombo, Sri Lanka. Far more than their ostensible contribution to PLAN counter-piracy escorts, these new steps offered valuable area familiarization and operational experiences to Chinese undersea forces, while producing a new symbol of Chinese power projection in service of sea lane security. Meanwhile, the PLA is increasing its soft power by training foreign military officers, including those from “virtually every Latin American and Caribbean country” at its Defense Studies Institute.

China’s defense industry has improved remarkably overall. “Over the past decade,” DoD judges, “China has made dramatic improvements in all defense industrial production sectors and is comparable to other major weapon system producers like Russia and the European Union in some areas.” Still, its capabilities remain uneven and patterns of disparity prevail.

Following a decades-long pattern, China’s space and ballistic and cruise missile sector remains firmly in the lead. There are many concrete manifestations of its superiority. China has deployed 1,200+ short-range ballistic missiles (SRBMs) opposite Taiwan. The CSS-5 Mod 5 (DF-21D) anti-ship ballistic missile (ASBM) it has “fielded” in small numbers “gives the PLA the capability to attack ships in the western Pacific Ocean” “within 900 nm of the Chinese coastline.” Its ICBM units are benefitting from improved communications links. The DF-5 ICBM is equipped with multiple independently targetable re-entry vehicles (MIRVs), and the new-generation DF-41 under development is “possibly capable of carrying” them as well. China is also developing hypersonic glide vehicles, and tested one in 2014. It boasts the JF12 Mach 5-9 hypersonic wind tunnel, reportedly the world’s largest.

To support what has been “extraordinarily rapid” development of conventionally armed missiles and other long-range precision strike (LRPS) capabilities, as part of the “world’s most rapidly maturing space program” China is lofting surveillance satellites in rapid succession. Gaofen-2, launched in August 2014, became “China’s first satellite capable of sub-meter resolution imaging.” It plans to launch successively improved variants of this satellite in coming years. China gained the ability to send even greater payloads to even higher orbits with the completion of a fourth satellite launch facility, Wenchang on Hainan Island, in 2014. Launches of the Long March-5 and -7 heavy lift boosters are scheduled to commence there by 2016.

Even as it increases its own use of space assets for military purposes, China is strengthening its ability to hold those of potential opponents such as the United States at risk. It is developing a range of counter-space weapons. Unusual launch patterns and activities in space suggest efforts to test such capabilities. When queried by Washington about these actions, Beijing declines to disclose details. Meanwhile, the PLA emphasizes electronic warfare capabilities, and is deploying “jamming equipment against multiple communication and radar systems and GPS satellite systems” on sea- and air-based platforms.

Chinese cyber capabilities have recently joined the top tier as well, with DoD long subjected to numerous intrusions. Beijing is also attempting to use its position in the Shanghai Cooperation Organization and other international fora to promote conditions whereby sovereign states can wield greater control over cyberspace governance, both within their borders and even beyond.

Maritime hardware comes next. Warship quantity is impressive: “The PLA Navy now possesses the largest number of vessels in Asia.” But quality is emphasized even more; China is replacing older platforms with newer, more capable ones. China’s shipbuilding industry has finally begun series production of multiple vessel classes. The Luyang-III-class (Type 052D) destroyer, which first entered service in 2014, has a vertical launch system capable of firing anti-ship cruise missiles (ASCMs), land-attack cruise missiles (LACMs), surface-to-air missiles (SAMs), and “antisubmarine missiles.” The Type 055 guided-missile cruiser slated to begin construction in 2015 will wield similar armaments. These include the submarine- and ship-launched YJ-18 ASCM, which DoD terms a “dramatic improvement” over the already-potent SS-N-27 that China previously purchased from Russia with eight of twelve Kilo-class submarines. This will greatly strengthen area air defense capabilities: Chinese naval task forces will increasingly be able to take a protective “umbrella” with them to distant seas far removed from the 300 nm-from-shore envelope of China’s extensive land-based Integrated Air Defense System (IADS). In addition, DoD judges that such warships may be close to fielding LACMs, which would give the PLAN its first capability to strike shore targets Tomahawk missile-style.

While civil maritime vessels are far less sophisticated than their naval counterparts, and typically lack major armaments, within this lower-intensity context the CCG is enjoying a buildup far more quantitatively impressive than that of the PLAN. It is already the world’s largest blue-water coast guard fleet, with more hulls than all its neighboring counterparts combined—and that includes the rightly-respected Japan Coast Guard. From 2004-08, it added nearly twenty ocean-going patrol ships; by the end of 2015, it is projected to have added another 30+ new vessels of this type. Together with the construction of “more than 100 new patrol craft and smaller units,” this will produce a total force level increase of 25%—growth simply unparalleled anywhere else on the world’s oceans. And that is even as many older platforms are replaced by new, improved ones; with many more having helicopter embarking capability than previously.

Lower in achievement thus far but improving rapidly is Chinese military aviation. Quantitatively, the PLA Air Force (PLAAF) is Asia’s largest, and the world’s third largest. The PLAN has an aviation force of its own, which is growing to provide air wings for the “multiple” carriers DoD believes China may build over the next fifteen years. Limitations persist: Beijing’s first carrier,Liaoning, is not expected to embark an air wing “until 2015 or later.” China remains weak in aeroengines, and may soon import perhaps two dozen Russian Su-35S fighters in part for their advanced engines and radars. Yet the PLAAF “is rapidly closing the gap with western air forces across a broad spectrum of capabilities.”