What Germany Can Learn From the U.S. on Counterterrorism 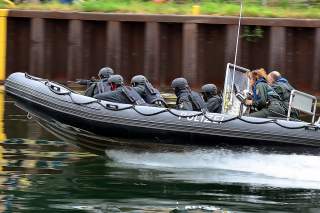 President Obama’s visit to Europe is highlighting the continent’s many woes—first among them is the ongoing migrant crisis and growing threat of terrorism. The discussion surrounding these issues has reached a fevered pitch in Germany in particular, as the country recently owned up to multiple blunders in identifying and thwarting terror attacks within its borders. Behind the growing terror threat is Germany’s ongoing debate about privacy and data collection, highlighted by a recent law to reign in Germany’s intelligence agency, the Bundesnachrichtendienst (BND), an organization which relies on flexibility and autonomy in order to be successful. Yet Germany’s new push to ban Islamist recruitment organizations and crack down on suspected terrorists reveals a newfound realism from Germany's leaders.

Twice this month, German law enforcement failed to prevent terror suspects from committing violent acts, causing widespread embarrassment and far-flung accusations among officials. In one case, Safia, a 16-year old German girl with Moroccan parents, stabbed a police officer in the neck with a kitchen knife in the Hannover train station. The subsequent investigation revealed multiple warning signs that were heeded but dismissed by German counterterror authorities.

In another prominent case, Jaber al-Bakr, a Syrian refugee in Germany who was detected by U.S. officials of plotting an attack on a Berlin airport, thwarted initial attempts at arrest in his Chemnitz apartment. When finally taken into custody, al-Bakr met with a jail psychologist who, having no previous experience with terror suspects, recommended he be given increased privacy. Al-Bakr used this window to hang himself with his t-shirt, depriving authorities of evidence about the planned attack and any accomplices.

While Germany’s counterterror mistakes sound mundane—missed evidence, insufficient facilities, law enforcement without proper training—they are in fact part of a larger problem, an inadequate policy of piecemeal legislation that doesn’t add up to a holistic counterterror solution. Germany approaches terrorism in a legalistic way that is reactive and evidence-based when compared with the American approach that is preventative and policy-driven and uses a combination of tools, such as intelligence and technology, to identify and trace likely terrorists. Germany’s approach is to treat suspects like regular citizens: wait until a crime is committed and then convict the criminal based on concrete evidence.

Yet Germany’s largest handicap in dealing with terrorism is the skepticism with which it views data collection and intelligence sharing. Memories of the Gestapo, Hitler’s powerful secret police during WWII, haven’t faded, but the concern is that Germany’s emphasis on privacy has less to do with history and culture and more to do with political considerations. Mistrust of law enforcement and intelligence agencies is politically popular in Germany and its politicians haven’t done enough to convince the public of the fundamental importance of intelligence to national security. This attitude is shared by much of northern Europe. Europol, the EU’s security service, works primarily with law enforcement rather than intelligence agencies because of European member states’ nervousness about intelligence collection and sharing.

This attitude is also evident in a law passed this month by the Bundestag to reign in the BND, Germany’s CIA, giving greater oversight of the agency to the Chancellor, a judicial court and the public. The BND may not retain data for more than six months and may only cooperate with foreign intelligence services, including the NSA, for approved purposes. Originally intended as a punitive response to the Edward Snowden revelation that the BND was closely cooperating with the NSA to spy on European leaders (although not necessarily German citizens), the government’s law treats the agency not as an asset, but rather as a potential risk to be monitored.

Yet Germany is giving small indications that its reluctance to use data collection as part of its national security toolkit is diminishing. On Friday, Germany’s budget commission approved the acquisition of a 400-million-euro satellite and the addition of thousands of new intelligence and law enforcement employees. Law enforcement also cracked down yesterday, raiding 190 sites of suspicion connected to an Islamist organization called The True Religion that was recruiting German teenagers to become jihadists. More politically palatable, German authorities are also discovering the use of intelligence in thwarting far-right terrorist groups. Law enforcement this week charged eight men in eastern Saxony with forming the so-called Freital Group, whose mission was to carry out attacks on asylum seekers and political dissidents.

While these steps are a positive sign, Germany must look at America’s record of success to seek broader changes to its counterterror policy. After 9/11, the United States realized it didn’t understand the goals and individuals at the center of terrorist operations. Now armed with intelligence, strong relationships with international allies, and clear checks on movement, the United States has a much better grip on likely suspects than Europe does with its porous borders and political bickering. Germans must agree on a policy solution that characterizes radical Islamic terrorism as a threat to national security and puts coordinated infrastructure in place to combat it. Radicalized youths like Safia and al-Bakr understand the constraints of Germany’s security apparatus and how to manipulate them; Germans shouldn’t let them get away with it.

Martha R. Simms acts as Director of Operations for the John Hay Initiative.