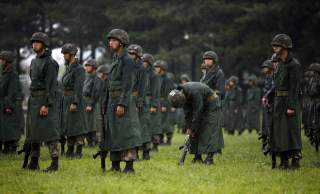 Militarily defeating a nuclear armed North Korea with minimal risks, low allied and DPRK casualties is possible. But that leads to the question of what sort of a post war Korea would emerge and how the peace can be won.

Winning the peace is a distinctly different task from fighting and winning the war. It requires different preparation, mindsets, training, expertise, and experience, much of which are not part of standard military repertoire. Occupational armies more often than not, lose the peace after winning the war.

The Soviet occupation of Eastern Europe brought them a sullen and oppressed “allies” called the “Warsaw Pact” who deserted them and defected to their arch enemies the moment USSR’s grip weakened.

Soviets facilitating the communist victory in China created for them an apparent ideological brethren that turned out to be a nuclear armed peer competitor barely two decades later. USSR diverted nuclear forces to deter PRC after 1969, and resources then had to be drained to support DPRK and Vietnam against the PRC up to USSR’s collapse in 1991.

Russia disappointed the G8 and ultimately was expelled after multiple incidents of rejecting the Liberal-democratic consensus that borders should not be changed by force. Russia in turn, is back as a non-communist, but great power peer competitor to Allies ruled by an autocrat. Allies won the cold war, dismembered USSR for the most part, but lost the peace with Russia.

PRC’s intervention to prop up DPRK, more a Soviet than CCP client, resulted in a costly war that while producing a useful client, was far outstripped by ROK and Japan under US protection. Moreover, DPRK, rather than a useful bulwark toward growing US power against the PRC, is likely to become the trigger for allies under UN Command renewing the conflict to denuclearize the Korean peninsula.

The ideological and geopolitical divisions between CCP led PRC as a revolutionary state and great power rival of the US and allies, papered over for nearly 5 decades since President Nixon visited PRC, is now back in the open. The PRC is openly advocating and implementing a program for the CCP to dominate the world and replace the allied led liberal internationalist order.

The Trump Administration’s new National Security, Defense, and Nuclear strategies identified a world with two great power competitors: Russia and the far more capable and lethal communist China. CCP economic aggression, mercantilists strategies and subversion of US and allies, once derided and discounted, are now high priority agenda items for both Administration and Congress.

Allies no longer assume that either Russia or PRC is on the path toward liberalization and democracy. In that respect, the temporary advantage gained between 1972 to 2000 detaching PRC from the Soviet orbit turned out to be at best, a wash, and potentially a costly mistake akin to allowing Germany to rearm after WWI.

The lessons from these cases suggest that the US and allies cannot accept anything less than either bona fide, permanent and irreversible denuclearization of the DPRK this time around, or alternatively, exercise a good military option to achieve the same goal. The former leaves open the possibility of DPRK surviving. The latter will by default, require termination of the DPRK regime. Should allies exercise a military option this time, it is unlikely the Allies will tolerate PRC creating DPRV Version 2.0.

If the PRC and Russia were to attempt to block denuclearization of DPRK either militarily or by stealth, it would certainly invite a strong Allied response. Limited war or stealth aid to DPRK will, for starters, likely result in the immediate cut-off of both Russia and / or China from access to world markets, freezing of their assets, locking them out of the allied financial system, and rounding up of enemy operatives everywhere. Such a move will immediately cause an economic depression in Russia and China.

Full cooperation with Allies in resolving the DPRK problem will leave open the possibility that PRC and Russia can have a disarmed buffer state like DPRK (even after regime change). Intervention in any form will leave the Allies no choice but to dictate the peace terms which will almost inevitably result in the absorption of DPRK by ROK on the German unification model.

The ROK Ministry of Unification reveals few hints as to how it might proceed. It almost seem that ROK could not conceive of being victors in a war as West Germany did. The lessons from German unification are invaluable and directly applicable for Korean unification.

Unification after a war with Allied forces as winners, still need to be cognizant of the need to minimize incentives and motives for the vanquished to go on fighting as irregulars and to provide continuity of governance and subsistence: stabilizing the system while gearing up for major change.

A disastrous mistake after the Iraq War of 2003 (Operation Iraqi Freedom) was the failure of invasion force to secure Iraq immediately after major combat operations ceased. The invasion force was sized to defeat the Iraqi forces (a shadow of its former self), but not for securing all major population centers to prevent looting and sabotage. Looting of government departments and their destaffing ended organized administration on the old model. Public Administration had to be rebuilt from scratch.

The Coalition Provisional Authority then made some disastrous blunders like disbanding the Iraqi military, security, intelligence and the Ba’th Party (Order 1 & 2) and ordering the privatization of the Iraqi economy (Order 39). Market forces, rather than snapping place magically to provide for the population as before (however wrenched), acted to provide a free for all: creating a Hobbsian world where life is “nasty, brutish and short”.

Out-of-work and unpaid soldiers and former Iraqi officials did what they knew best: looted military arms caches, formed into armed gangs, and used their newfound freedom and unemployment to rob, loot, and do whatever needed to survive. This in turn, grew into initially a small, and ultimately a large insurgency that continued to this day.

Contrast the disaster in Iraq with West Germany whom effectively bribed East German officials and military officers by offering to exchange East German Marks (nearly worthless) at inflated rates (varied from par for 1st 4,000 DDR Marks, 2:1 then 3:1). This deal almost ensured no organized opposition to the vanquishing elite and officials of East Germany.

ROK is a sufficiently wealthy economy to afford this kind of largess that would encourage DPRK officials and military (whom had large stocks of DPRK Wons) to be bribed to surrender. Making them big winners in reunification by offering a similarly inflated exchange rate is a small price to pay compared to the cost of an insurgency like the US faced in Afghanistan and Iraq.

What about giving DPRK officials and military officers the ability to keep their existing jobs and titles, suitably renamed, except at a ROK scale of pay and benefits including pensions? That will be another costly, but highly effective means of pacification. Giving every former DPRK national immediate access to ROK social safety net benefits is another costly, but critical move to stabilize the economy.

Private property rights is a central element of ROK vs DPRK. How to bring it to a newly freed populace? Suppose every person who had usage rights (should we say squatter’s rights) the day before the war were to be entitled to receiving title for residential property they occupied. And for those who did not have property, they will be issued a voucher to acquire one as it is built? ROK can afford a massive construction program to create jobs.

By granting title of residential property to the entire population, ROK will instantly make them all property owners. A similar process can be implemented to transfer all industrial and commercial enterprises, farms, etc. to cooperatives whose members will eventually become shareholders. Administratively it will be incredibly complex, but well within the skill set of ROK administrators.

Making everyone a property owner is great in theory, but in practice, most of the population need a period of time to be educated in how markets work, and how to safeguard their wealth and grow it.

The lesson from Russian privatization is that such a process must have “dampers” that prevent the sale of assets by an improvised people at fire sale prices that created the oligarch class, which in turn, set back the emergence of a stable middle class in Russia.

Transfers of property “gratis” to ex DPRK nationals will require on limitations on their sale, mortgaging, etc. (e.g. 10% annually) with only gradual liberalization of the restraints. That way, fewer will make the mistake of “selling out” too soon only to discover explosive price growth later.

Creating a propertied class with an equitable income distribution is an educational process that takes time and cannot happen instantly. Market forces need to be introduced, but only gradually for a population that only known rationing by the state and party all their lives. A decade goes by very quickly, and can result in the emergence of a propertied middle class --- the foundation of a modern democracy.