What Happens If Taiwan Doesn't Get the F-35? 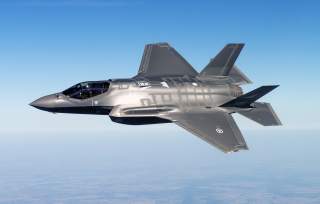 Washington’s indecision on whether to sell its ace F-35 stealth fighters to Taiwan, despite the latter’s persistent call for more arms deals, is said to be a big letdown not only to Taiwan’s leaders but also to Chinese spies on the island.

Pentagon is concerned that cutting-edge weaponry and defense technology sold to help Taiwan stave off Beijing may eventually end up in the latter’s hands, given the island’s allegedly lax counter-espionage and suspicion that state agencies are infested with Chinese spies.

Taipei proposed arms purchases last year, including F-35s, that could be worth NT$90 billion (US$3 billion).

Lawmakers from the ruling Democratic Progressive Party have prodded the Tsai Ing-wen administration to do a thorough “house cleaning” to ensure that Beijing has not infiltrated state agencies, before talks on more deals go ahead.

The Taipei Times has reported that the government hoped the F-35 – in particular the short vertical take-off and landing variant F-35B – would give the island modern fighter planes that could properly challenge China’s J-20s.

But a spate of spy cases and intelligence leaks in the less than two years since Tsai came into power, has made Washington believe Taipei is incapable of keeping the F-35s away from Beijing’s prying eyes.

Former US Secretary of Defense William Perry cautioned against the sale of F-35s to Taiwan. Perry, who served in Bill Clinton’s cabinet and coordinated the deployment of a US carrier to the Taiwan Strait after Beijing’s missile tests in 1996, told Taiwan’s Central News Agency during his visit to the island last week that Taiwan should focus more on training its airmen.

The island is also in a rush to toughen its “far too lenient” laws so there are heavier penalties which truly deter people from espionage and theft of state secrets.

The island’s Legislative Yuan is now reviewing a draft addition to the National Security Act to strip a state employee of his pension if he or she is convicted of espionage or other treasonous activity.