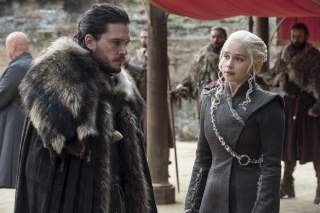 The seventh and penultimate season of HBO’s Game of Thrones concluded last night in a whirlwind of blue dragonfire, long-awaited comeuppance and hot aunt-on-nephew action.

The episode ended with all the forces of Westeros marching north to confront the White Walkers and their wights, marking the partial success of Jon Snow’s season-long quest to unite the living against the dead.

Unfortunately, Queen Cersei’s commitment to the alliance was a ruse, as she revealed to her brother Jaime when she told him her plan to expand her own holdings while Daenerys exhausted her forces in the North.

With the Night King’s breach of the Wall in the episode’s final scene, the stage is set for a series of climactic battles between his zombie horde and the hastily assembled alliance opposing him. But even if there is a Westeros left to rule when the dust settles, we have no guarantee that it will be stable or well-governed. The game of thrones, with its brutal rule of “you win or you die,” could continue in an endless cycle of competing claims, shaky alliances and senseless bloodshed.

Fortunately, for the student of European history, this game is not an unfamiliar one. Despite the lack of dragons, White Walkers and shadowy demon babies in the wars and political maneuverings that shaped modern Europe, these real-life histories can teach us valuable lessons. Perhaps they can even provide the blueprint for a peaceful Westeros rising from the ashes, assuming the war in the North ends with ashes and not an eternal blanket of snow.

One of the main contributors to Westerosi instability is the feudal system of government. The Starks, Lannisters, Mormonts, and other noble and great houses all hold their own lands and command their own troops. Although all swear fealty to the crown and pledge to fight for it if called upon, the bannermen of a given house often place their true loyalty with their immediate lord and their own countrymen, not with the faraway monarch in King’s Landing. In Season 1, the northern lords quickly rallied to Robb Stark when he marched south to rescue his father, their lord. This season, Lord Randyll Tarly found himself torn between conflicting loyalties between the Crown and House Tyrell, and although he chose to fight for Queen Cersei, he only did so because he regarded Daenerys Targaryen and her Dothraki and Unsullied as dangerous foreigners. This loyalty to house and homeland, while often admirable, makes Westeros difficult to govern as a unified whole.

After centuries of mostly stable Roman rule, the fifth century saw the collapse of the empire and its highly efficient centralized military and administrative system. Without the bureaucracy to assess taxes and the military might to collect them, the barbarian warlords who succeeded the empire in Western Europe were forced to delegate these duties to clan leaders, who fought for their king in return for plunder and other favors and privileges. One of these barbarian kings was even forced by his plunder-hungry vassals to go to war against his will. The problem with this system is that eventually, the crown becomes merely ceremonial, while the true power rests with the most powerful vassals.

The problem of administration is less dire in Westeros, in which rapid communication is possible via ravens and learned maesters perform bureaucratic functions capably. The problem of military decentralization, however, would be difficult to solve. Even Aegon “The Conqueror” Targaryen allowed noble families to remain in control of their lands after swearing fealty to him, and those he deposed, he replaced with other noble families. Despite Daenerys’s constant promises to “break the wheel” of constant power struggle, the noble families will have to be included in some way. Their power must be reduced, but the regional loyalties of the great houses and their banners are too strong to do away with entirely.

Westeros must have a strong central government. Decentralization would leave it vulnerable to foreign invasion. England, which somewhat resembles Westeros and had been split into a number of warring Celtic kingdoms, fell piece by piece to invasion by the Angles, Saxons and Jutes from mainland Europe in the fifth century. The Targaryen monarch of Westeros was able to easily defeat a foreign threat in the War of the Ninepenny Kings, but a fragmented Westeros could easily fall to a future invasion from Essos, which could lead to slavery, only lately abolished in the East by Daenerys, being introduced to Westeros on a massive scale with devastating consequences for the common people.

This leads to the paradox of how to maintain a strong central government without allowing the great houses too much power, and the only solution appears to lie with Targaryen dragons. Aegon’s conquest led to three hundred years of relative peace in Westeros, but it was only the near-extinction of dragons after a disastrous Targaryen war of succession that paved the way for Robert Baratheon’s successful rebellion that overthrew the Targaryen dynasty. In the Season 7 finale, Daenerys told Jon that it was dragons that allowed her family to gain and keep power for so long.

In this way, dragons, which according to lore can only bond with Targaryens, are similar to real-world nuclear weapons, which despite the long nightmare of the Cold War, have led to sixty years without a war between the great powers, the longest such period in centuries. Just one of Daenerys’s dragons inflicted such devastation on the Lannister army that its commander, Jaime, was shocked into urging his sister to sue for peace.

With a “nuclear hegemony” provided by dragons, and assuming that Daenerys’s dragons can reproduce (a debated topic in GoT lore), a Targaryen monarchy offers the best chance of providing centralized power and holding the great houses in check. Therefore, to ensure the best chance at a peaceful and prosperous postwar world, either Jon or Daenerys, the only two Targaryens left alive, must end up on the Iron Throne.

This, however, introduces one last problem: inbreeding. It seems that Targaryen bloodlines must be kept very pure in order for dragon bonding to occur. And inbreeding inevitably leads to madness. According to a popular saying, “Every time a Targaryen is born, the gods flip a coin.” The reign of the Mad King was horrific, and he didn’t even have any dragons.

If Daenerys and Jon do manage to conceive a child and found a dynasty, one of their descendants will be as psychotic as Caligula and have the power to melt entire cities on a whim. Clearly, just as dragons and the Targaryen monarchy provide a check on the great houses, there must be a way for the great houses to check the Crown.

The best possible solution, then, is a constitutional monarchy. A Westerosi House of Lords, in addition to helping govern at the local level, could help the monarchs decide succession to avoid insane rulers, or minimize the role of such rulers should one ascend to the throne. There would be little risk of a coup, since only a Targaryen can control the dragons.

For this plan to work, several pieces must line up perfectly: the Night King must be defeated, a Targaryen must take the throne and pass it to a purebred heir, and the dragons must be able to reproduce. But if the lessons of history, both European and Westerosi, are heeded, then perhaps there is a chance at lasting peace.

Grayson Quay is a freelance writer who has contributed to Rare.us, Townhall.com, Watchdog.org and the Washington Times.