What if America Had Selected the X-32 over the F-35 Stealth Fighter? 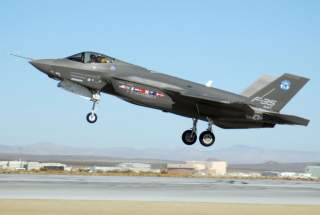 In October 26, 2001, the U.S. Department of Defense announced that Lockheed Martin’s X-35 had won the Joint Strike Fighter contest over Boeing’s X-32.

The win secured Lockheed’s future as the manufacturer for all of America’s fifth-generation fighter platforms. But Lockheed’s resultant F-35 has suffered myriad delay, technical glitches, unrecoverable technical shortfalls and massive cost overruns. Already the largest ever defense program with an estimated price tag of $233 billion in 2001 for a total of 2,866 aircraft, the F-35 program is now estimated to cost more than $391 billion for 2,457 jets, according to the Government Accountability Office.

Moreover, while the short-takeoff vertical landing F-35B was originally projected to achieve initial operational capability with the U.S. Marines in 2010, it only reached that milestone in 2015—five years late. Meanwhile, the conventional F-35A and the F-35C carrier variant were both slated to achieve initial operational capability with Block 3 software in 2012—but that software block is now scheduled to be delivered for operational testing in 2017 at the earliest.

Would Boeing have done any better? Hard to say—the Joint Strike Fighter was always a technically challenging and extraordinarily ambitious program. It is likely that Boeing would have run into similar but different technical and budgetary problems. The fundamental issue with the Joint Strike Fighter was that is was always an overambitious program to replace multiple specialized types with one aircraft in the hope that it could perform every role equally well. The result is predictably a jack-of-all-trades but master of none.

One of the main reasons why Lockheed Martin’s design was selected over Boeing’s was because the X-32’s direct lift system—which uses engine thrust to lift the aircraft—is prone to pop stalls. That’s a phenomenon where hot exhaust gases are reingested into the engine causing a power loss. There were also questions as to whether the engine would be powerful enough to lift a fully operational F-32—the prototype had to have parts removed to ensure it would fly. It probably didn’t help Boeing’s case that it had to redesign the X-32 to meet the modified JSF requirements. An operational F-32 had a very different configuration from the X-32.

Even if Boeing managed to solve the airframe issue, they would have had to deal with the extremely complex sensor fusion software. The software was always going to be a challenge under the best of circumstances. The only edge Boeing had was that it had developed the Lockheed Martin F-22’s avionics package—but the JSF is much more complex.

Overall, it is very likely the Boeing would have run into the same sort of technical hiccups, cost overruns and delays as Lockheed did on the X-32. Lockheed mismanaged the F-35 program to an extent, but the Pentagon’s requirements for a all-in-one wonder plane is what caused the programs problems. With either company, the JSF program was almost certainly going to be late and over budget—it just a question of by what margin.