What If Britain Had Been Defeated at Dunkirk? 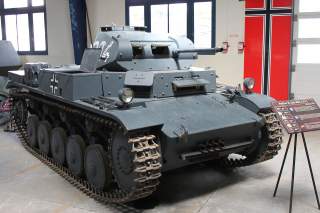 From radios across Nazi-occupied Europe comes the triumphal blare of martial music followed by the news: the Third Reich has won a glorious victory at Dunkirk. In cinemas around the world flicker the newsreels of glum, haggard British prisoners streaming into German prison camps.

Thankfully, this didn't happen. During nine fateful days, from May 26 to June 4, 1940, the British managed to evacuate more than 200,000 men of the British Expeditionary Force from the beaches of Dunkirk. From what seemed like certain destruction, the cream of the British army had been rescued to fight another day.

But what if Britain had been defeated at Dunkirk? As history goes, it's counterfactual, but far from far-fetched. Indeed, during that grim spring of 1940, what could have seemed more unlikely than a ragtag fleet of civilian ships plucking 200,000 British—and 140,000 French and Belgian troops—to safety?

The alternate scenario almost writes itself. Instead of halting their panzer divisions, Hitler and his senior commanders order them to crush the bridgehead around the port of Dunkirk with the same drive and relentlessness that smashed France in six weeks. Tired as the Wehrmacht was from its breathless advance, it is scarcely conceivable that a determined German thrust could have failed to destroy the battered, disorganized and exhausted defenders of the beachhead.

Dunkirk would not have succeeded without the bravery of the French rearguards: whatever the flaws of the French military in 1940, for a few crucial days, they held the Germans at bay while the evacuation continued. What if those French troops had retreated or surrendered? Or what if a storm—the same kind of gale that devastated Allied shipping at Normandy in 1944—had unleashed its fury in 1940?

For whatever reason, let us assume the British Expeditionary Force (BEF) had been killed or captured. What difference would it have made? For the most crucial question, whether Britain would have surrendered, the answer is unclear. With top leaders like Lord Halifax favoring negotiations with Germany after the fall of France, Churchill would have faced even more political pressure to make peace, though he would have had no illusions as to the durability of any peace treaty with Hitler.

Regardless of whether the BEF was evacuated or not, it wasn't the British army that stopped German tanks from clanking through London. The BEF had left most of their equipment behind, and as would be seen in North Africa, British ground troops were outmatched in leadership, tactics and equipment by the German army. What really kept Germany's Operation Sealion from invading and conquering Britain was the Royal Navy and the Royal Air Force (in that order).

Nor would the loss of 200,000 soldiers have been fatal. Catastrophic, yes, but not fatal. The British army managed to muster some 3.5 million soldiers during World War II. Those soldiers were not unaccustomed to defeat: 80,000 British and Commonwealth soldiers surrendered at Singapore, and 32,000 at Tobruk, in 1942. True, by 1944, the British army was so short of manpower that existing divisions were broken up to keep other divisions up to strength. Even so, after a Dunkirk disaster, the army would certainly have been reconstituted, perhaps filled out with manpower drawn from the other services.

Yet this is more than a question of manpower. In real life, losing 200,000 men in a few weeks is devastating, especially for democracies (the Nazi and Soviet totalitarian states seemed to shrug off defeats like that as the cost of fighting a war). It would have taken years for the British army to be trained and rebuilt, and perhaps longer to regain self-confidence. The British fought the United States tooth-and-nail to try to stop the Normandy invasion in favor of an "indirect" strategy of attacking the Third Reich in peripheral areas like the Mediterranean and Balkans. After a Dunkirk defeat, would Britain have acquiesced to landing in France whatever the American pressure?

Ultimately, the most crucial consequence of surrender at Dunkirk would have been not manpower and morale, but timing. Between June 1940 and the second half of 1941, the only army fighting Hitler belonged to the British empire. The Soviet Union and the United States fielded enormous armed forces, but they wouldn't join the war until later (In 1940, Russia even had a non-aggression pact with Germany, and supplied the Third Reich with raw materials).

Despite being alone, Britain took the offensive. Despite the pounding the BEF took in France, a handful of divisions conquered Italian East Africa and routed Italy's North African armies. Churchill even dispatched an expeditionary force in March 1941 to support Greece against a German invasion. It was a doomed and military foolhardy move, but it signaled the world—and potential allies like the United States—that Britain was still in the war.

None of this might have happened but for the miracle of Dunkirk.