What If North Korea Had Won the Korean War? 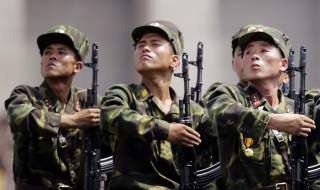 In the summer of 1950, the Korean People’s Army (KPA) came tantalizingly close to rolling up UN forces on the Korean Peninsula. Only a heroic defense around Pusan prevented a total victory for North Korea (the DPRK), thus allowing MacArthur’s war-changing invasion at Inchon. But what if North Korean forces had prevailed? What would Korea (and by extension the rest of Asia) look like today?

How Could North Korea Have Won?

North Korea could have won the war in one of three ways. First, if the United States had decided not to intervene, the KPA would have rolled up South Korean forces and taken Pusan, likely ending the war. Second, even after the deployment of U.S. and UN forces to South Korea, the situation remained touch-and-go. At several points in the Battle of Pusan Perimeter, North Korean forces threatened to penetrate UN lines and collapse the pocket. Had this happened, the United States would have faced the difficult choice of whether to continue the war and go ahead with the invasion at Inchon. Third, China’s intervention in the war in November of 1950 devastated advancing UN forces. Although the UN recovered, it was not inconceivable that the Chinese offensive might have forced a UN collapse, allowing the PLA to roll up the peninsula.

In any of these situations, Pyongyang would have reigned over the entire Korean Peninsula. While the political details matter a bit (defeating U.S. forces at Pusan would have created enmity between the DPRK and the United States; decisive Chinese intervention would have made Pyongyang more dependent upon Beijing), we can treat them as effectively the same for the purposes of the later political and economic development of the DPRK.

What would a Korea unified under Pyongyang look like today? Probably not much like modern South Korea, but not necessarily very much like contemporary North Korea, either.

In some ways Korea was better positioned to enter the international economy under advantageous terms than either China or Vietnam. Japanese colonization of Korea had brought industrialization and infrastructure development. If Pyongyang had won the war quickly, the north would not have suffered the devastation of U.S. strategic bombing. Altogether, the DPRK would have been in a strong position to develop as an industrial power within the socialist bloc, finding markets in both the USSR and the PRC, and deriving industrial and technical assistance from the former.

The big question is whether a unified socialist Korea would have tried to join the global international economy in the late Cold War, as did China and Vietnam. The Kim dynasty was perhaps destined to be dictatorial in nature, but the regimes of Le Duan and Mao Zedong at times seemed equally impenetrable. Both of the latter moderated, however, granting economic freedom and a certain degree of political latitude that the people of the DPRK have not enjoyed.

The dictators of both China and Vietnam had a degree of freedom that the Kims did not; they had both won their civil wars, or at least come as near to victory as practically possible. This meant that the regime no longer faced the existential threat of another national government across a militarized border. Both Beijing and Hanoi could make long-range plans and take into consideration greater exposure to the global economy, as well as loosened control of domestic markets. In both China and Vietnam, this has resulted in tremendous economic growth—growth that the contemporary DPRK has never seen.

There is little doubt that the ROK represented an external existential threat to North Korea legitimacy, and that this contributed to the insular and autocratic nature of the regime. Perhaps Kim Il-sung would have been forward-thinking and flexible enough to adopt similar policies similar to those of China or Vietnam if he had won the war in 1950. But of course this would have required a level of imagination and ideological flexibility that Kim Il-sung never really displayed. It’s entirely possible that Kim Il-sung would never have opened North Korea to international trade and investment. Exposure to and trade with the global economy brings political risk, as Deng Xiaoping learned in China.

Politically, Korea could have turned this economy into strong military support for socialist causes around the world. In its current incarnation North Korea has been an important arms exporter, and if Kim Il-sung had united the country, it likely would have contributed even more on this front. With respect to relations with the Soviet bloc, the Kim dynasty would have ended the war indebted to both Moscow and Beijing, but more to the former than the latter. The close proximity of Korea to China likely would have worked to push Kim towards Moscow, although the ideological complexities of the Sino-Soviet split were difficult to manage for everyone. It doesn’t seem likely that Korean relations with China would have deteriorated to the same extent as the Sino-Vietnamese relationship.

Pyongyang would always have had an enemy to define itself against. Japan, with its history of colonial domination, lay just a short distance away. U.S.-dominated Japan would have offered Kim Il-sung everything he needed in terms of an enemy to justify his own domination of Korea. While it is unlikely that the DPRK would have engaged in large scale attacks against Japan, it very well could have replicated the behavior of the actual Cold War, which included espionage, small-scale raids, and kidnappings.

Impact on the United States

The United States does not generally take defeat well. The victory of Mao Zedong’s forces in the Chinese Civil War sparked a political crisis in the United States, leading to the McCarthyite wave that poisoned U.S. politics in the 1950s. Acknowledgment of the lack of success of the Vietnam War accompanied significant social unrest. If the United States had failed to prevent the collapse of South Korea, either through defeat on the battlefield or through omission, the implications might have been huge.

Domestically, the anticommunist hysteria that seized the United States in the early 1950s might have been even worse. Truman would have faced tremendous criticism from Republicans for being “soft” on communism. Without a war to fight, Eisenhower might not have seemed as appealing to the Republican Party, opening the field for more extreme candidates who might (after winning the 1952 election) have taken the Cold War in a far more dangerous direction. That said, some forty-five thousand Americans would not have lost their lives fighting in Korea, and another hundred thousand would not have been wounded.

Defeat in Korea might have driven the United States to redouble its commitment to less defensible positions in East Asia, such as Vietnam. Indeed, with Korea lost the United States could have taken a much harder line on support for the French, perhaps stepping up and relieving French forces at Dien Bien Phu. The United States might also have increased support for Chiang Kai-shek’s regime on Taiwan, or taken more active steps to disrupt Chinese control of Tibet.

South Korea had a difficult road after 1953, including decades of autocracy and a long struggle for economic prosperity. Today, however, the Republic of Korea is a thriving democracy with a strong economy, a citizen in good standing of international society. North Korea . . . has nuclear weapons. The loss of life during the Korean War was dreadful, but it’s difficult to imagine a world in which the Pyongyang regime could have replicated the achievements of the ROK. Losing the Korean War would have made things difficult in the United States as well, potentially with ripple effects across the rest of Asia. All told, while the Korean War ended in an unsatisfying stalemate, and while North Korea remains a permanent crisis, the world is undoubtedly a better place because the UN intervened to prevent Kim Il-sung’s victory.