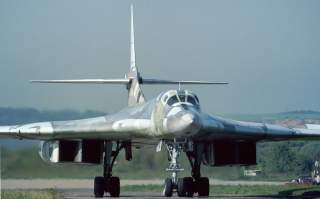 Russia’s new Tupolev Tu-160M2 Blackjack supersonic strategic bomber is expected to make its first flight in late 2018 and enter into full-rate production by 2021. The Tu-160M2 is a new upgraded variant of the late Soviet-era Blackjack, which was built in very small numbers before the collapse of the Soviet Union in 1991.

“The first Tu-160M2 is expected to take off by the end of 2018, followed by full-scale production in 2021,” Col. Gen. Viktor Bondarev, commander of the Russian Air Force told the state-owned RIA Novosti news outlet.

The new date reflects a slight shift from previous Russian government statements, which had indicated the new production Blackjack would fly in 2019 with production starting in 2023. Many analysts, expect that the new Blackjack will become the backbone of the Russian strategic bomber force of the future assuming Moscow can find the funding for the project in the current economic climate.

The Tu-160M2—though it more or less retains the same airframe—is practically a new aircraft under the hood. The new bomber will feature completely new mission systems and possibly be powered by upgraded versions of the existing Kuznetsov NK-32 afterburning turbofan. The Russians plan to buy about fifty of the new Tu-160 variant, however it is not clear if the 16 original model Tu-160 airframes will be upgraded to the new standard.

Moscow can make do with the upgraded Tu-160M2 for its strategic bomber force because unlike the United States Air Force, the Russian Air Force does not expect the massive aircraft to penetrate into enemy airspace to deliver its payload. Instead, the Tu-160—which is capable of speeds of over Mach 2.0—would dash into position to launch long-range standoff cruise missiles. As such, stealth is not considered to be particularly important. Indeed, one of the advantages of a highly visible strategic bomber is that it enables nuclear signaling.

But the Tu-160M2 is not likely to replace the long-serving Tupolev Tu-95 Bear—the two bombers will likely operate side-by-side for decades to come. “Both platforms will have to coexist at the same time like the B-52H and B-1B,” said Michael Kofman—a research scientist specializing in Russian military affairs at CNA Corporation. “They are not interchangeable, hence I do not subscribe to the theory that the Tu-160 can replace the Tu-95s in their various modifications.”

As such—like the B-52—the Tu-95 likely has many years of service left before it is eventually replaced. It will likely remain the primary Russian strategic bomber for at least two more decades. “I see no future in which the Tu-95s are phased out for another 20 years,” Kofman said. “They are clearly being pylon modified for the new Kh-101/102 missile—which tells you they will have that mission for some time to come.”

For the Russian Air Force, the bomber’s payload of cruise missiles is far more important than the bomber itself. The stealthy new Kh-101—which proved itself over Syria—and its Kh-102 nuclear-tipped variant are both designed to penetrate into heavily defended enemy airspace—allowing the bomber to strike from afar. Both missiles have ranges well in excess of 1800 miles and will comprise the primary armament for the Russian strategic bomber fleet.

As for the Tupolev PAK-DA stealth bomber—it’s not likely to materialize anytime soon. “Russians like to announce new programs because it’s cheap to make aspirational announcements that may never be realized, especially in fiscally austere conditions,” Kofman had earlier told The National Interest.