What One of Star Wars' Most Famous Battles Can Teach the U.S. Military 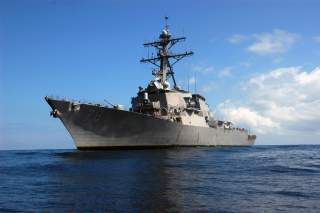 From the sinking of HMS Victoria in 1893 to the 2012 USS Porter collision, the hubris of experience and seniority can blind and isolate leaders to deadly result. Such is the cautionary tale of Vice Adm. Amilyn Holdo’s toxic leadership that brought the Resistance to a crisis.

The conflict between ex-Commander Poe Dameron and Vice Admiral Holdo is interpreted by some as a junior leader’s sexist arrogance, and an unwillingness to follow orders. But for orders and intent to be followed, orders and intent must be given and credibility maintained. Leaders fail when they do not establish expectations, communicate intent, or at minimum engage with key subordinates—like their strike group’s wing commander, airboss, bridge watch standers and intelligence shop. Vice Admiral Holdo’s communication failure forced subordinates to abandon her formal authority for loyalties higher in the hierarchy—the ship, the mission and the cause.

In the aftermath of the Republic capital’s destruction, a decapitation strike eliminates the senior military leadership onboard the last Resistance flagship. The Resistance fleet’s remaining officers and their immediate subordinates gather on the secondary bridge seeking direction stolen by two devastating fleet losses, the death of Admiral Ackbar, Leia’s incapacitation and an unending siege of Imperial gunnery. Into this crisis and a sea of dirty uniformed watchstanders strides Vice Admiral Holdo, wearing a spotless art-gala gown and halo-tiara.

Poe notes that Vice Admiral Holdo was “not what I was expecting.” He’s right, it shouldn’t have been. Even by long-long-ago in a galaxy far-far away standards, a vice admiral taking charge of a fleet under fire in civilian evening wear is likely unsettling. What was this vice admiral doing while the rest of the military personnel were fighting and dying?

The uniform is a strong nonverbal communication tool, hence the military’s sometimes misguided obsession with creating new ones. Uniform standards may be loosened during a time of high operational tempo, or tightened afterwards to communicate a return to normal routine. Some commanding officers (CO) don utilities and clean alongside their crew, to show that no one is above work. In different contexts, the same uniform can communicate different messages. A CO in Service Dress Blues will inspire fear at a disciplinary hearing, or suggest senility if wandering the bilges.

Admiral Akbar is dead—long live Admiral Akbar. The crew needed someone who immediately appeared to be in the fight. They sought one one of their own, a woman who projected military competence and confidence different than their civilian leaders, like Sen. Leia Organa or Mon Mothma before her. A vice admiral wearing nonmilitary formal wear before a dirty cadre of uniformed officers mourning the loss of their chain of command communicates only the negative: she believe herself above or apart from her own people, is indifferent to them, or senile at worst. This confusing dissonance between brutal combat and ballroom cocktails feeds the coming mutiny.

But eccentricity is swiftly forgiven in commanders with a genius for victory or survival—a skill that requires forthright communication of orders and intent. Vice Admiral Holdo fails in this basic communication to her assembled leadership in a scenario involving an existential threat. This systemic communication failure—and the crew-wide perception they were being flown to their deaths—is clear from the identities and actions of Poe’s insertion team and the mutineers.

Despite his demotion, Poe likely retains his positional authority as wing commander. This would make sense due to the Resistance’s normalized levels of risk and insubordination as well as the personnel shortages. He is, at minimum, the senior-most remaining aviator in the Resistance. Poe, his pilots, and his aviation personnel are critical for the successful development and preparation of stealth shuttle evacuations—instead, they are left in the dark. A vague faith in hope is Vice Admiral Holdo’s only repeated direction. To a freshly demoted wing commander, this sounds exactly like the bull-headed suicide run his commander in chief had demoted him for executing—except they’d lose the entire Resistance, not merely a bomber wing.

Lt. Kaydel Ko Connix, as a bridge watchstander involved in shuttle operations and communications, should have been given some sort of brief by her CO or the vice admiral’s staff in order to properly stand her watch. None was given, as otherwise she would have let Poe in on the plan.

As one of the aviation technicians necessary for the preparation of shuttles for stealth operations, Rose’s leadership would have given her a partial brief on the stealth evacuation plan. But as noted earlier, the entire aviation detachment had been cut out of the information loop until the very last minute.

Meanwhile, as the genetically engineered former Imperial technician who helped destroy a planet-sized superweapon, Finn’s insight would be critical to the evacuation operation. The plan hinged upon a deep knowledge of First Order technical capabilities. Instead, he is kept out of the loop, and attempts to evacuate Rey’s beacon—evidence Vice Admiral Holdo was seen as committing the fleet to a fugue-like march to death.

Ultimately, the fact Leia herself was brought out of anesthesia to quell the mutiny says all one needs to know about Vice Admiral Holdo’s communication with her staff and crew—there was none, and her hold on authority had long collapsed. But the lack of communication would not be so fatal if Vice Admiral Holdo had encouraged the engagement of her subordinates. Unfortunately, this becomes her cardinal sin.

Vice Admiral Holdo and Ex-Commander Dameron are two battle-hardened warriors. Both are differently imperfect decision-makers who have both been shaped—by necessity—through razor’s edge risk-taking for the narrowest margins of victory. Poe’s insubordination in carrying out his bombing run against a direct order demonstrates his poor abilities as an operational commander, and the kind of misguided self-reliance these situations have created in Resistance leadership. Unfortunately, Vice Admiral Holdo was not immune.

“Forceful backup” occurs when leadership ensures their imperfect decision making is instinctively corrected and supported by their subordinates, or that their subordinates feel obligated to seek out and understand fully the commander’s orders and intent. The 2012 Porter collision, during which an over-proud CO continuously berated and ignored the watch officer attempting to save his career, is an example of why accepting and encouraging forceful backup is critical to success. When Poe approaches Vice Admiral Holdo for guidance as wing commander—having received none—the admiral insults Poe and pilots generally. She directs him to shut up and color while providing neither palette nor lines.

In his insubordination, Poe demonstrates why his involvement would have been so critical to Vice Admiral Holdo. Though a terrible operational commander, Poe is a fearless tactical weapon and an inspiring leader for Resistance warfighters. His organization of the infiltration team required succinct communication of desired goals, encouragement of cross-specialty input, and coordination of cross-departmental actions. Vice Admiral Holdo’s poor leadership would have gained the complementary advantages of the poor operational commander.

Leaders in similar positions have passed this forceful backup test—namely, Rear Admiral Spruance. During the Battle of Midway, Task Force 16’s Chief of Staff, Captain Browning, refused the advice of the Air Group Commander, Lt. Cmdr. Wade McKlusky: that Browning’s plan under-fueled and over-armed his strike aircraft. Unquestionably, had McKlusky executed these orders as written, his pilots would have run out of fuel over the Pacific and died—a scenario with the scent of Poe’s suicide bomber run. However, Rear Admiral Spruance established a command climate where these critical details were more important than formality. When McKlusky approached Spruance, the plan from Browning was countermanded. Because Rear Admiral Spruance encouraged his subordinates to place the mission above their nervousness or their pride, he averted disaster.

If Vice Admiral Holdo had a similar command climate—her staff spending hours leading up to Crait fine-tuning and red-teaming her plans—greater damage could have been done to the Imperial fleet. Some staffer, perhaps Lt. Connix or one of Poe’s junior pilots, might have suggested using the sacrificed support craft for earlier hyperspace-ram maneuvers. Perhaps Finn’s technical expertise could have been used to more effectively hide from the Imperial fleet.

Though Vice Admiral Holdo’s EMCON stealth escape was defeated by the failure of Poe’s insertion team, the Imperial fleet would have eventually detected the exodus visually or become suspect at the proximity of a former rebel base. Perhaps a senior member of the ship’s engineering team would suggest the Resistance put the support vessels on auto-pilot, rather than sacrifice their last remaining CO’s on noble-but-pointless deaths.

“This Is Not Going To Go The Way You Think”

When an admiral dresses for the gala while her fleet sails into the gallows, the mutineers’ lesson isn’t going to be the condemnation of insubordinate ignorance some presume it to be. As she demoted Poe, Leia chastised him that his bombing mission had, “dead heroes, no leaders.” Vice Admiral Holdo is one of those dead heroes, and left her fleet without leadership.