What President Obama Didn’t Say In His ISIL Speech 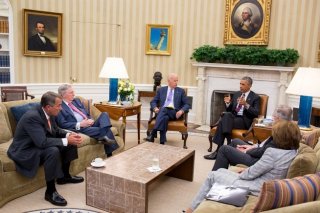 President Barack Obama had a lot riding on his prime-time speech to the nation last night.  In addition to publicly revealing the anti-ISIL comprehensive counterterrorism policy that the administration has been talking about for the past week, the president needed to use his plumb spot on television to assure the American people that he understands what it will take to degrade and eventually defeat this terrorist organization.  For the political team at the White House, Obama’s address was also an opportunity to set the record straight on his previous comments (ISIL is a “manageable problem,” “we don’t have a strategy yet,” etc.), stop the bleeding in his poll numbers, and begin a counterattack to the persistent criticism that Republican lawmakers have hailed his way.

As a general matter, President Obama succeeded in most of these objectives (getting congressional Republicans to praise his policy is more than a long shot).  The four-step plan that the president outlined to the American people during his 15-minute address hit all the right notes and will most likely add some points to what has been a tumbling foreign policy approval rating.

Expanding the scope and frequency of the U.S. air campaign against ISIL targets in Iraq; potentially engaging in airstrikes in Syria; increasing military and logistical support to the Iraqi army, the peshmerga, and the moderate Syrian opposition; stemming the flow of cash and foreign fighters to the ISIL brand; and continuing to meet the humanitarian needs of the people under ISIL’s thumb are all necessary and noble aspects of this comprehensive anti-ISIL plan.  So far, the combination of aiding Iraqi and Kurdish forces on the ground with coordinated U.S airstrikes on selected ISIL targets has proved to be effective in recapturing territory, and the president is reasonable to believe that this winning formula should be employed to other areas of Iraq.

Yet just as President Obama may have buried some of the lingering doubts that have circulated across the country about his leadership as Commander-in-Chief, his speech opened up another set of questions that will ultimately make or break his policy against ISIL.

The speech, for instance, was high on the benefits of multilateralism and on the outright necessity of forging a deep and lasting global coalition against the ISIL terrorism threat.  But beyond explaining why other nation’s needed to get involved in the effort, the president was virtually silent on the details.  He talked about the United States being “joined by a broad coalition of partners,” but neglected to tell the American people who in fact is participating in this coalition and what each of these members will be doing in order to pull their own weight.  Nor did President Obama acknowledge whether or not this essential coalition was even formed yet.  The fact that Secretary of State John Kerry is trotting around the Middle East and appealing for assistance from Saudi Arabia, Jordan, Turkey, and the Gulf States is an indication that this “broad coalition of partners” is a work in progress.

President Obama reminded Americans that U.S. combat troops would not be redeployed back onto the battlefields of Iraq.  Yet the “combat troops” label is somewhat of a misnomer: the brave men and women of U.S. Special Operations Command and Joint Special Operations Command will once again be tapped by the administration to retrain and salvage what has essentially become a demoralized and split Iraqi army.

“In addition to providing weapons, ammunition and equipment,” the White House said in a fact-sheet released shortly after the president’s speech, “U.S. Special Operations Forces (SOF) will train and advise Iraqi forces, including Kurdish forces, improving their ability to plan, lead and conduct operations against ISIL.”  Arming, training, and advising Iraqis however, is not as mundane as it sounds; there is a slight possibility that the training program may need to be ramped up as the operation proceeds.  U.S. personnel may also be asked to put themselves in riskier environments to ensure that the training and embedding mission is done successfully.  The president was explicit is saying that “there are risks involved,” but evaluating the degree of risk is just as important.

Finally, President Obama announced that the United States will be getting far more involved in Syria’s civil war—accelerating the U.S. train-and-equip program for moderate Syrian rebels who are fighting on two fronts (against ISIL and Bashar al-Assad) and whose capabilities pale in comparison to the Islamic State.  If Congress agrees to the president’s request, $500 million will be available for the Defense Department as seed-money to supplement the smaller training program that the Central Intelligence Agency has reportedly been running for over a year.  Yet the question must be asked: is it too late for U.S. assistance to make a difference?  The Free Syrian Army is perhaps at its most fragile point since Syria’s civil war began, and the moderates have been begging for heavy U.S. military equipment for years now.  Will $500 million be enough money, and if not, is the president willing to double down on his strategy and expend more taxpayer funds to improve its chances of success?

If it hasn’t already, the administration must answer all of these questions, both before and during the implementation of the counterterrorism strategy.  But for now, President Obama took the first big step: drawing up a blueprint for action and focusing the entire U.S. national security bureaucracy on the same objective.