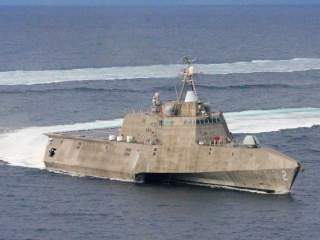 Defense Secretary Ash Carter just told the Navy to spend less money on ships and more on jets. In a memorandum this week, he directed Navy Secretary Ray Mabus to cap purchases of Independence and Freedom-class ships at 40 (instead of 52), to rely on one shipbuilder from 2019 onwards, and to plough the money saved into F-35Cs. Carter is torqued that the Navy for years "has overemphasized resources used to incrementally increase total ship numbers,” as if ships was what the Navy was supposed to buy. Until now, these particular ships had survived the critics, but now, the Joint Strike Fighter is eating the budget, and it must be fed. Given trends in military technology, and a fundamental question about American strategy, I do wonder if this re-emphasis on aircraft and quality over ships-in-quantity may be the wrong call.

First, about those LCSs. After arguments that the “Little Crappy Ships” cost too much and did too little, the Navy hatched a plan to improve their firepower and survivability. The new versions will be frigates, with over-the-horizon missiles for killing enemy ships, an improved three-dimensional radar and SeaRAM missiles for local air defense, 25 mm guns for better warding off small boats, and a towed array sonar and torpedo countermeasures for better capability against submarines. The Navy’s LCS-as-frigate plan does put the emphasis on sub-hunting, but that is a traditional emphasis for frigates.

There remains a question as to how thoroughly quieted these new frigates can be on a hull not built expressly for that purpose. The bigger question, as Andrew Davis of the Australian Strategic Policy Institute has asked, is whether ships focused on fighting other ships (including submarines) is a sensible purchase in an era in which jet-powered aircraft with precision-guided missiles can range hundreds or thousands of miles out to sea in search of targets. In the near future, evading detection by legions of drones, and failing that, surviving what Andrew Krepinevich of the CSBA calls a “mature precision-strike regime” near an enemy coast, will be very challenging for any surface ship.

To get to the frigate—yes, it will be a frigate—Navy has learned plenty of lessons from its operations with the first few ships of the two classes. The crews are “tight-knit” but a bit frazzled. Yes, there remain serious questions about the survivability of the first-generation (LCS version) of the Independence and Freedom classes. The Pentagon’s chief weapons tester is unimpressed with the Navy's plans in that regard—though I’d take his office more seriously if it hadn’t declared the Predator drone “not operationally effective or suitable.” And as Steve Wills of Ohio State has argued, modern small ships are quite rationally built more for disposability than survivability. The latter vessels will be frigates, but perhaps not traditional frigates. As with MRAPs and aircraft, the better objective might be crew survival.

Moreover, take note (as the U.S. Naval Intelligence has in a report this week) of how the Russian Navy really likes little ships, even employing them recently as cruise missile shooters against Al-Baghdadi’s gang and the Syrian rebels. The Russians are also have the old cruiser Moskva (12,500 tons from 1979) watching the Syrian coast, because the aerial threat to its operations is not over the Caspian. If surface flotillas are to survive in the most hazardous seas, as Commander Phil Pournelle of the Office of Net Assessment keeps saying, then numbers will be needed. To command the seas one wants to command, as Bryan Clark of the CSBA has argued, more ships with more missiles and more missiles per launcher will be required.

Now, about those jet fighters. Just yesterday, USAF Chief of Staff General Mark Welsh was complaining that there are at least 10 places in the world—and perhaps soon there will be 25—where his older aircraft cannot readily penetrate the air defenses. He needs a lot of F-35s, he told reporters after the recent trilateral exercises around Norfolk, because "you have to have the ability to dismantle those things. . . until you can do that, you can't do land and maritime operations. In today's warfare, without air power, you lose." Where are the big problems? Welsh avoided saying, but Air Force Times went on to note that General Frank Gorenc, commander of U.S. Air Forces in Europe and Africa, had earlier singled out Russia’s Königsberg (Kaliningrad) exclave and occupied Crimea.

I find this thinking uncreative, and for two reasons. First, if neither side can establish air superiority, then air attacks become far less relevant to the progress of a campaign. At that point, land and sea forces become much more important. This only makes war unwinnable if one insists on fighting a war in the manner of NATO’s interventions in Bosnia or Kosovo, striving too hard to avoid getting anyone killed. Secondly, the specifics of terrain are important. Anti-ship missiles in the rugged mountains of the southern Crimean coast would dominate the Black Sea if the Montreaux Convention didn’t already. But if the air defenses of Königsberg threatened flights over Poland, Lithuania and the Baltic Sea, there are better ways to destroy them than bombing. The exclave is only 100 kilometers across from north to south—too small for hiding big-and-obvious systems like the S-400. Find those missiles and radars with disposable drones, and destroy them with rocket and cannon fire from across the border.

In every military problem, Carl Builder famously argued, the Air Force aims for a technological salvation. This week Air Force Research Laboratory said that it aims to demonstrate a laser on a fighter jet by 2020. Perhaps the Office of the Secretary of Defense has now taken up that technological calling too. The problem is that the implications of the technology in question are not so obvious. Perhaps lasers on aircraft could destroy inbound missiles, but if lasers really every work, they’ll shift the balance of operational power towards ships, which are big enough to carry and generate enough power for really long-range, airplane-frying lasers. If technological advantage is as fleeting as Deputy Secretary Work believes, than manned strike fighters, like surface ships, might soon be too expensive and too obvious.

None of this means that the Freedom or the Independence, in an LCS or FF version, is the right ship for the U.S. Navy, but it does mean that ships in quantity are what’s right for anyone serious about an open-ocean navy. That dynamic is what recently led T. X. Hammes of the NDU to argue both that quantity will trump quality in future wars, and that blockading China makes more sense than fighting across its shores. If you’re bent on frequently fighting air wars over someone else’s territory, then doubling-down on F-35s might make sense. If you’re looking to keep the oceans open for business, you’re going to need a lot of ships.

James Hasík is a senior fellow at the Brent Scowcroft Center on International Security. This article first appeared in the Defense Industrialist.