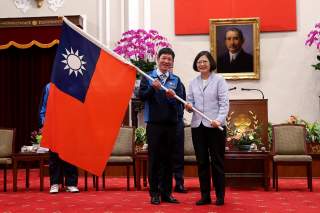 In a transition process marked by no shortage of surprises, Donald Trump stirred another hornet’s nest when the president-elect stated on American television on December 11 that “I don't know why we [the United States] have to be bound by a One-China policy unless we make a deal with China having to do with other things, including trade.”

Like reactions to the president-elect’s brief phone conversation with the democratically-elected president of Taiwan, most pundits’ comments ranged from fear, disbelief, and contempt. Some observers were shocked that Donald Trump had the audacity to question the sacrosanct “One China” policy. Others scornfully mocked the president-elect for waddling into a destructive change of U.S. policy that risks igniting World War III. While some expressed concern that the president-elect was using Taiwan as a bargaining chip.

The overwhelming reactions to the president-elect’s comments referred to the “One China” policy as if it came from the pages of the Bible. Every U.S. president (except Teddy Roosevelt and John Quincy Adams) swore their oath of office on the holy book, and even the Bible is open to interpretation. Similarly, and yet, the “One China” policy is neither law nor ever clearly defined.

Indeed, according to then- Assistant Secretary of State for East Asian and Pacific Affairs James Kelly in 2004:

In my testimony, I made the point "our One China," and I didn't really define it, and I'm not sure I very easily could define it. I can tell you what it is not. It is not the One-China policy or the One-China principle that Beijing suggests, and it may not be the definition that some would have in Taiwan. But it does convey a meaning of solidarity of a kind among the people on both sides of the straits that has been our policy for a very long time.

As former State Department official and Global Taiwan Institute (GTI) Adviser John Tkacik astutely observed: “Our [US’] China policy has become an impressionistic fabric similar to Justice Potter Stewart's view of pornography; that is, ‘I shall not today attempt further to define the kinds of material I understand to be embraced within that shorthand description [of pornography]; and perhaps I could never succeed in intelligibly doing so. But I know it when I see it....’”

Seemingly too taboo to even touch, the confusion is understandable because the U.S.’ “One China” policy is ambiguous at best and indecipherable at worst. That the policy continue to be shrouded in mystery creates dangerous myths that make the policy susceptible to manipulation and misapplication. The U.S. “One China” policy, at the very least, is due for a recalibration.

Yet, even these experts tend to under emphasize the evolutionary quality of the U.S. “One China” policy and over emphasize Beijing’s reactions. An important point that Asia specialist and GTI adviser Shirley Kan highlights: “the US’ ‘One China’ policy consists of an evolution in how Washington conducts its policy, which is not bound by Beijing’s dictates to other countries.”

Amongst the partisanship that is now consuming the policy ecosystem, the current polarized political environment within the United States presents a power-play opportunity that will not be lost on the PRC. Beijing will try—as it has since 1971—to define the US’ “One China” policy in closer alignment with its own anachronistic definitions. While US’ Taiwan policy does not exist within a vacuum, conducting policy by creeping deference to how Beijing ‘sees’ “One China” is dangerous.

The official U.S. position has tried to be purposely flexible when addressing the relationship between the PRC and Taiwan. To directly quote the Shanghai Communique of 1972: “The US side declared: The United States acknowledges that all Chinese on either side of the Taiwan Strait maintain there is but one China” (emphasis added). As former US State Department Deputy Assistant Secretary Randy Schriver and former Vice Chairman of the congressionally-mandated US-China Economic and Security Review Commission Dan Blumenthal reminded everyone, to “acknowledge” does not mean the United States accepts that position.

Yet, how Washington conducts its policy towards Taiwan is being manipulated by a fallacy of false choices due in part to gradual and excessive—public and private—deference to Beijing’s “one-China” principle. Beijing’s discursive warfare rests on the power of definitions and, more generally, broadening the applications of its “One China” principle, while narrowly limiting the applicability of core elements of Taiwan policy such as the Taiwan Relations Act, Six Assurances, and the 1994 Taiwan Policy Review in both the public mind and in how policymakers’ conduct policy.

The reactions to the president-elect’s comment has shown a spotlight on the increasing dangers associated with the lack of clarity about the U.S. “One China” policy, especially if it is not distinguished from the PRC’s “One China” principle, which has led to a gradual encroachment of the latter on US’ policy towards Taiwan.

The U.S. approach to the trilateral relationship between Washington, Taipei, and Beijing requires recalibration. At the very least, it behooves the incoming administration to restate the longstanding U.S. “One China” policy as articulated by Assistant Secretary of State for East Asian and Pacific Affairs James Kelly mentioned earlier: “I can tell you what it is not. It is not the One-China policy or the One-China principle that Beijing suggests.” The president-elect could take a page out of Beijing’s playbook by drawing a line around Beijing’s “One China” principle.

In the final analysis, continuation of a passive approach that in effect defers to the PRC’s irredentist claim over Taiwan will lead to a widening sovereignty gap in the Taiwan Strait and greater instability. There is wide latitude for U.S. policymakers to work within the existing framework, but first it requires a clearly stated agenda of soft-balancing in the Taiwan Strait.