What the World Can Learn From the ISIS Jakarta Attacks 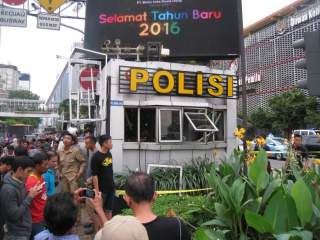 Indonesia’s worst terrorist attack in six years may have set Jakarta on edge and introduced a troubling new tactical dimension to Southeast Asian terrorism, but the pistol-wielding militants failed to live up to what’s normally expected of a brutal Islamic State in Iraq and Syria (ISIS) franchise.

Strange on all fronts was the choice of targets—a Starbucks outlet and a one-man police post—the use of handguns and small explosive devices and, above all, the death toll: four terrorists and four victims, an Algerian-born Canadian, a traffic policeman, and two Indonesian civilians.

ISIS claimed responsibility, but surely it would have frowned on the surreal spectacle of the gunmen aimlessly roaming one of Jakarta’s main thoroughfares in front of a large crowd of gawking onlookers before police responded in full force.

Given the number of homemade grenades they were carrying, scores of people could have died—as they did in the Burkina Faso capital of Ouagadougou two days later at the hands of militants belonging to al-Qaeda in the Islamic Maghreb.

Police spokesmen now say that two of the militants, shown on television blowing themselves up without making an attempt to take anyone with them, in fact detonated an explosive backpack prematurely.

The Jakarta operation was a departure from previous attacks in the city since 2003, all involving suicide bombers targeting upscale hotels and, in 2004, the Australian Embassy, which will soon be replaced by a new $700 million blast-proof mission.

It’s still unclear how many attackers were actually involved. Police initially claimed that in addition to the four who were killed—including two who died in a prolonged gunfight—two others had been captured alive.

Nothing more was heard of them, but several security sources say it explains why another twelve suspects were rounded up over the next two days, all linked to Indonesian militant, Bahrun Naim, who joined ISIS in Syria last year after serving a prison term for arms possession.

Naim is the chief recruiter for Katibah Nusantara, the ISIS-formed Southeast Asian militant group that includes 250 to 300 Indonesian fighters. At least sixty Indonesians have died since March 2015 fighting against Kurdish forces or in coalition air strikes.

In recent months, Naim has been calling on extremists in Indonesia to mount attacks that will gain the attention of the ISIS central leadership. But local militants, some previously affiliated with Jemaah Islamiyah, don’t appear to be conforming to the brand, outlined in a sixty-four-page ISIS guideline, for lone wolf attacks.

The subsequent arrests of many other militants indicates ignorance of one key instruction: to organize in only five-man cells, where the members know each other “without the cells having a link with each other and even with any group. So if all five are caught, they will not put other cells in danger.”

They may also have been in too big a hurry. “The brother(s) who want to join you, you must know them very well. You should know their history, their childhood, their past, their past experiences in university, their job, ex-jobs, their political affiliation, virtually everything”—that advice points to a long-term recruitment strategy, not an operation planned in days or weeks.

Indonesia’s Detachment 88 anti-terrorist unit had already arrested twenty-three suspected jihadists in raids over the previous three weeks, suggesting authorities were aware of a looming threat and may well have forestalled a much larger attack.

Certainly, the amount of explosives and weapons seized showed that a range of splinter groups were still operating beneath the radar—even if Indonesia hadn’t seen a major incident since the bombing of two downtown hotels in July 2009.

Still, Institute for Policy Analysis of Conflict (IPAC) director Sidney Jones rules out the possibility of an operation on the scale of last November’s Paris attacks, saying ISIS followers currently lack that capability. Or perhaps the motivation.

Questions remain about how committed Indonesian militants really are to face up to civilian bloodshed. While they may set bombs and fight on foreign battlefields, it isn’t clear whether they’re ready to walk into a crowded mall and open fire indiscriminately.

Majority-Sunni Indonesia doesn’t have the same depth of Muslim divide or the multitude of other Middle East factors that contribute to the calculated brutality exhibited by many ISIS fighters in protection of their newly-declared caliphate.

In this case, the attackers may also have taken note of the angrily-defiant public reaction to an attack which occurred several hundred meters from the presidential palace in the heart of the Jakarta’s business district.

The emergence of an ISIS structure in East Java last November may have increased the pressure for jihadi actions, but Jones says for attackers to succeed in terms of significant casualties and major publicity, they’ll need to be much better organized.

In a paper presented to a regional forum a week before the January 14 attack, Jones said the most immediate danger was if the new ISIS cells are strengthened by training from one or two returned fighters.

“It is not a flood of returning fighters that poses the biggest risk now, but rather the existing cells on the ground whose members are eager to undertake attacks but lack the capacity to do so,” she said.

The Indonesian government will have to pay special attention to more than two hundred of its citizens, about half of them women and children, who were expelled from Turkey and six other countries during 2015 before they could join ISIS.

Many had sold everything to finance the trip and have returned home destitute, presenting authorities with a test of the effectiveness of their de-radicalization and social welfare programs.

It’s also a major challenge for police, anxious to keep them under surveillance but lacking the resources to do so. Male fighters may be seen as the main threat, but Jones says some of the women are just as militant and frustrated at not being given a bigger role.

Civil society activists are worried that the attack will be unfairly seen as a failure of intelligence and lead to the Indonesian Armed Forces being given a larger role in the anti-terrorism campaign.

As if to underline that point, the Army Strategic Reserve, Indonesia’s main combat force, dispatched a column of armored vehicles and a company of troops to the scene. The police had done well and the terrorists were dead, but the army’s message was clear.

John McBeth is a Jakarta-based correspondent. This article first appeared in the Strategist.