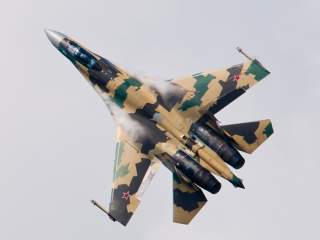 Russian air operations over Syria are continuing at a somewhat reduced pace even as the Kremlin says it is withdrawing its main forces from the region.

The Russian air force conducted forty-one sorties in support of the Syrian army’s offensive to retake Palmyra between March 20 and March 23. According to Moscow-based TASS—which cites the Russian Center for Reconciliation of the Warring Sides in Syria—Russian aircraft struck 146 targets during the battle. Syrian president Bashar al-Assad’s forces entered the city on Thursday to recapture it from the Islamic State terrorist group.

“Six command points, more than 320 terrorists, five tanks, six pieces of artillery, two ammunition depots and 15 vehicles were destroyed,” reads a statement from the Center according to TASS. “No strikes were made on opposition armed groups who announced cessation of hostilities and provided information about their positions to the Russian or American reconciliation centers.”

Russia is drawing down some of its forces—Moscow’s potent Sukhoi Su-34 Fullback bombers and Su-25 Frogfoot close air support aircraft have returned home. But Russia still has advanced Sukhoi Su-30SM and Su-35S multirole fighters and older Su-24 Fencer bombers at its base in Latakia. It also has a host of Mil Mi-24 and Mi-35 gunships at its Syrian base. Moreover, in some cases, Russia is increasing its footprint as advanced Kamov Ka-52 and Mil-28N gunships arrive in theatre.

Indeed as Dmitry Gorenburg and Michael Kofman at CNA Corporation write at War on the Rocks:

“This maneuver is more about political perceptions than military reality. It constitutes a political reframing of Russia’s intervention in order to normalize Moscow’s military presence in Syria, and make it permanent, while convincing Russians at home that the campaign is over. Putin’s statement is yet another successful effort to achieve a domestic and international publicity coup.”

As with many of the Kremlin’s pronouncements, there is always more than meets the eye. As Gorenburg and Kofman write:

“Anyone who believes that this withdrawal is a sign of Russian retrenchment due to overextension is likely to be disappointed. Moscow’s announcement is a means of turning the chapter on the intervention in Syria, but it is not about defining how Russia leaves, but rather about how it stays to secure long term interests. The change of political reference is a mechanism to ensure both the domestic audience and the international community come onboard and accept Russian military presence in Syria as the new normal.”