What Would a Naval War Between China and India Really Look Like? 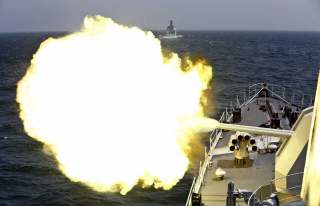 A tense Sino-Indian border standoff last year stirred speculation about what might happen if the two nuclear-armed Asian giants went to war.

Beijing and New Delhi have shelved their differences for now, but the potential for a future clash remains. This is nudging military analysts to theorize about the outcome of a possible face-off between Indian and Chinese forces along the Himalayan frontier and on the Indian Ocean. The relevancy of such assessments is heightened by Washington’s pursuit of a new Indo-Pacific strategy that views India as a counter-weight to China’s ambitions in the region.

On the naval end, attention focuses on a possible confrontation between China’s new aircraft carrier battle group and a similar Indian carrier force. Both navies have more flat tops under construction and boast hunter-killer and nuclear-armed ballistic missile submarines.

However, those expecting a Midway-like clash of aircraft carriers will likely be disappointed.

Unlike in the South China Sea, China has no friendly air bases in the Indian Ocean. Any Chinese carriers deployed to the region will only be able to defend themselves with a relatively meager air wing, according to Ho, a naval analyst with the Military Studies Program at Singapore’s S. Rajaratnam School of International Studies.

Ho published an analysis titled ‘How Might China Fight a Sino-Indian Naval War?’ in late January in IAPS Dialogue, the online magazine of the Institute for Asia & Pacific Studies.

The People’s Liberation Army Navy (PLAN) vastly outnumbers India’s— by four times, or roughly 283 vs. 66 major surface ships, not counting subs. But Ho and other analysts argue that India has the advantage of fighting close to home bases, while China faces the “tyranny of distance” that dogged British ships in the Falklands.

“Numbers seldom if ever tell the whole story in marine combat,” US Naval War College Professor James Holmes commented in an August Foreign Policy piece on the outcome of a possible Sino-Indian naval conflict.

Both China and India also operate carriers with relatively small “jump decks.” This limits the complement of fighters that can be carried, along with the amount of ordnance that can be launched with individual planes. Ho says this also cuts the proportion of planes that can be allocated for attack as opposed to defense.

It’s also likely that China would deploy only one carrier battle group against India due to competing strategic priorities in the western Pacific. “The Chinese carrier group would essentially be on its own,” Ho told Asia Times in an email interview.

If China deploys a carrier group, Ho says the force will likely operate with a high degree of circumspection because of the enormous odds it faces so far from home. It will also be leery of deploying its carrier close to India’s coast, where it will be vulnerable to anti-access/area-denial weapons.

The Indians, egged on by public opinion, would try to find and attack the Chinese carrier group. But Ho argues this would be problematic given the vast expanses of the Indian Ocean where the Chinese can play cat and mouse. Both nations lack very advanced satellite reconnaissance that can pinpoint enemy ships, although China is closing the gap with new tracking technology.

In the end, Chinese subs, destroyers and mine layers may see more action in a conflict where they’re likely to deploy near major Indian ports and naval facilities, Ho says.

Warplanes based in mainland China may also face trouble providing air support for a carrier group since they must overfly India-sensitive nations like Bangladesh and Myanmar to reach the Indian Ocean.

Moreover, China’s much-vaunted DF-21D anti-ship missile may prove useless against Indian carriers. It must be fired from land and there is no ship-based version.

The challenge for the DF-21D and other anti-ship missiles, according to Ho, is that a target carrier force moving at a typical speed of about 20 knots would have moved to another location a few kilometers away from its point of detection by the time a missile is finally launched.

The DF-21D reportedly has sensors to track moving targets at sea. But Ho contends this capability hasn’t been proven — even in drills.

Ho says the only possibility for a 21st-century Battle of Midway would be if India tries to interdict a Chinese force as it sails through the narrow Malacca Strait. “But this course of action could elicit a strong pushback not just from the littoral states of Malaysia, Indonesia, and Singapore, but also the international community, given the economic importance of that waterway,” Ho said.

China currently has one operational carrier, the Liaoning, a refitted Soviet-era ship purchased from Russia and an indigenously built Type 001A that may be launched this year. Beijing reportedly has plans to build several more. But Ho notes that its latest Type 001A boasts only a slightly larger air wing than the Liaoning’s 20 combat aircraft, consisting of Shenyang J-15 fighters. An American Nimitz-class carrier, in contrast, carries well over 40 strike fighters.

India has one carrier, the INS Vikramaditya, in active service today. Another, the INS Vikrant, is fitting out and is expected to be commissioned in 2020. Each ship carries a little more than twenty fixed-wing aircraft, not counting helicopters.

The Vikramaditya is a modified Kiev-class aircraft carrier which entered into service with the Indian Navy in 2013. It served with the Soviet Navy during the Cold War, was bought by India in 2004 and underwent years of refitting. It’s equipped with Russian MiG-29K fighters. The Vikrant is the first carrier to be built in India.

Comparing China’s J-15 to India’s MiG 29K, Ho says: “On paper, both aircraft’s combat attributes are fairly evenly matched. While the Indian MiG-29K is lighter and more maneuverable, the Chinese J-15’s serviceability rate is better and this means that more of them can be brought into action at any one time.”

But pilot competency is another matter. Critics have questioned the quality of China’s still unproven fighter pilots vs. India’s, who train with and are said to compare favorably with US ones. Others say China is closing the training gap.

Would China accelerate the hunt for friendly bases in Indian Ocean nations like the Maldives if it felt its carriers were out on a limb? China is expanding its strategic footprint and ties in the region. A new naval base in Djibouti in the Horn of Africa and reports of another in Gwadar in Pakistan are examples. But Ho says a permanent Chinese military presence in India-sphere nations such as the Maldives or Sri Lanka is unlikely due to push-back from New Delhi.

This article by By Doug Turuoka originally appeared on Asia Times.