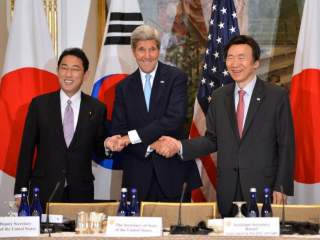 South Korea and Japan reached a landmark agreement on Dec. 28 to settle long-standing divisive issues resulting from Japan’s 1910-45 occupation of the Korean Peninsula.

The most emotional and complex topic was that of women forced into sexual slavery, euphemistically known as “comfort women.”

Japan had asserted the issue, included compensation, had been settled during the 1965 treaty normalizing bilateral relations and subsequent apologies. South Korea argued that additional measures were required.

1) The Japanese government will pay 1 billion yen ($8.3 million) as compensation

Kishida announced during a subsequent press conference that Japan “fully recognizes its responsibility” for forcing the women into servitude, which “left a scar on the honor and dignity of the victimized women.” He commented that Abe expressed remorse, offered his “heartfelt apology” and vowed to help survivors retrieve their honor and dignity by faithfully carrying out the agreement.

Bilateral Japanese-South Korean relations suffer from centuries of built-up animosity with cyclical spikes of increased tension. The sexual slavery issue became a proxy for grievances during the brutal Japanese twentieth-century occupation after surviving comfort women first told their stories in the 1990s.

The issue took on additional prominence after South Korean President Park Geun-hye made it the crux of bilateral issues and initially refused to hold a summit with Abe. However, both leaders vowed in 2015 to improve ties and pledged to reach a resolution by yearend.

The accord provides the basis for sufficiently settling the comfort women issue to build mutual trust and improve bilateral relations.

What the Deal Means for the U.S.

The United States will welcome the breakthrough since it could allow its key Asian allies to refocus attention from past differences to jointly focus on current security threats from North Korea and China. Washington had been frustrated by both countries’ intransigence on historic issues.

Removing the principle stumbling block should lead to expanded military cooperation amongst the United States, Japan and South Korea for deterring the growing North Korean nuclear threats. In June 2012, Seoul had canceled a planned military intelligence sharing agreement with Tokyo which would have improved trilateral defense against a North Korean missile attack. Hopefully, South Korea will now be open to resurrect that security agreement as well as integrating its national ballistic missile defense system into the more comprehensive and effective allied system.

Today’s agreement is a stunning success achieved through diplomatic perseverance as well as the courage by Abe and Park to overcome seemingly insurmountable differences. However, for the agreement to come to fruition, both leaders must push back against nationalist elements in both their countries. Japanese ultra-right groups—who deny Japanese imperial army involvement in wartime atrocities—may seek to undermine support for the agreement. Korean non-government groups may argue the agreement doesn’t go far enough in requiring Japanese contrition and demand additional Japanese concessions.

Japan could balk at implementing the agreement if the Korean groups don’t remove the comfort woman statue facing the Japanese embassy or refrain from future protests. Difficulties could also arise from differing interpretations of Japanese legal responsibility for its wartime actions.

Bruce Klingner is a senior research fellow for Northeast Asia at The Heritage Foundation's Asian Studies Center. This article first appeared on the Daily Signal.