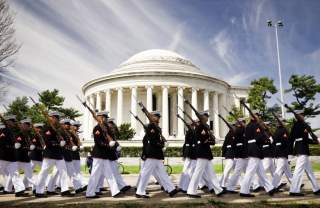 The last survivor had not yet been pulled from the World Trade Center’s 200,000 tons of twisted steel when senior White House officials met to lay the legal foundation of the future war on terror. In New York, 2,606 people were dead; aboard planes bound for Los Angeles and San Francisco, 246; at the Pentagon, where the jet fuel still burned, 125. As the nation reeled, government lawyers struggled to authorize combat operations against an enemy whose identity was still unknown. The resultant resolution, passed by both houses of Congress on September 14, 2001, stated:

It was with the weight of the 2001 Authorization for Use of Military Force (AUMF) that President Bush delivered an ultimatum to the Taliban and declared a broader war against terrorism. On October 7, 2001, the first U.S. bombs fell in Afghanistan, swiftly followed by ground invasion. The Taliban fled to Pakistan. Al Qaeda scattered across the Middle East.

In 2002, additional U.S. forces deployed to the Philippines, the Horn of Africa, and India-administered Kashmir. Meanwhile, the CIA launched its first drone strikes into Yemen. In 2004, these strikes extended into Pakistan. In 2007, the U.S. counterterrorism missions expanded further to the Sahara and Sahel; in 2008, Central America and the Caribbean; in 2013, Mali.

Then, on September 10, 2014, President Obama stood in the White House East Room and declared that the United States would “degrade and ultimately destroy” the self-declared Islamic State. In thirteen months of operations, the United States has launched over 5,000 air strikes and killed over 10,000 ISIS fighters and Al-Qaeda affiliates. U.S. combat personnel have deployed to reconstitute the Iraqi army. They work to assemble cells of fighters in Syria.

These efforts—every reconnaissance flight and drone strike and combat deployment—have been executed under a congressional authorization that is now nearly fourteen years old. 22-year-old U.S. Army Specialist John Dawson, killed this year in Afghanistan while conducting enduring operations, was halfway through elementary school when the 2001 AUMF was passed. Some ISIS combatants now targeted by U.S. air strikes had not yet been born.

The 9/11 war has become the longest-running conflict in American history. Its name has evolved with it: the “Global War on Terror,” the “Long War,” and the comparatively sterile “Overseas Contingency Operations.” The conflict’s expeditionary medal is awarded to U.S. service members who deploy to the “land area, airspace, and waters of” of fifty-two separate countries. A bill first intended to untangle the plotting of nineteen Al Qaeda hijackers now provides the legal framework for counterterrorism operations in one-fourth of the nations of the world.

Some observers, noting how much time has passed, might reasonably ask why the 2001 AUMF should not be repealed and the continent-spanning “war” simply ended. After all, Kalid Sheikh Mohammad rots in Guantanamo. Mohammed Omar has passed away. Osama bin Laden, shot in a room filled with VHS recordings of his own better days, has been dead four years.

Yet, despite these small victories, the world has seemed to grow only less safe in the years since 9/11. While some of this can be attributed to U.S. policy, much cannot. It is a result of broader, global trends: economic discontentment, political revolution, technological diffusion, and the growing prominence of violent Islamic fundamentalism. Therefore, although the modern national security apparatus can be reshaped and reformed, it can never be fully dismantled. There is no returning to a pre-9/11 world.

If there is no going back to the way things were, however, there should be an opportunity to go forward—to discuss, candidly, what the U.S. military’s counterterrorism mission should look like for the next decade and how it should be legally authorized. This is the sort of conversation that should be had openly and loudly, between the president and Congress and between Congress and the citizens it represents. Such a dialogue must start with a revision of the 2001 AUMF.

This effort began, haltingly, in February of this year, when the Obama administration introduced a draft AUMF specific to operations against the Islamic State. Debate quickly bogged down over the question of geographic limitations, the existence of a sunset clause, and even the definition of “enduring offensive ground operations.” More cynically, debate was also mired because the congressional majority had little reason to vote for it. If operations were going to continue either way, why assume political responsibility for a fight that might not succeed?

In order for the 2001 AUMF to be properly replaced and updated, it will likely have to wait until the start of a new administration. Yet that is still fifteen months—and another anniversary—away. By the time the next president takes office, the sixty-word law that grounds the United States’ global war on terror will be old enough to drive.

On this fourteenth anniversary of 9/11, the day is best memorialized by reflecting on those 2,977 lives lost and pledging to do more for those survivors and first responders who remain. Much less fitting of a memorial is the 2001 AUMF, passed in the nation’s darkest hours, that still determines so much of American foreign policy today. Although the attacks must never be forgotten, the war must one day be ended. It is our job to begin thinking about what comes next.

Emerson Brooking is a research associate for defense policy at the Council on Foreign Relations where this piece first appeared.