Where America, the EU and Russia All Compete for Influence 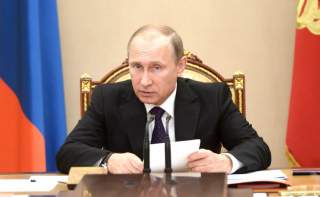 Some see recent trips by U.S. officials to Russia—including a meeting between Secretary of State John Kerry and Russian President Vladimir Putin at Russia's Black Sea resort of Sochi—as signs of a budding détente. Yet, the northwestern corner of the Black Sea remains the scene of a three-sided struggle between Russia, the U.S. and EU.

With a party of other analysts, last week I spent a day in meetings with representatives from Romania's Foreign Ministry and Senate Foreign Affairs Committee. That Crimea is only 300km from the Romanian coast is a refrain. They see Romania as a front-line state.

“Russia is a European reality. Ukraine is only a piece in a bigger puzzle”, declared one official. “But we have our guarantee’, another concluded, a matter-of-fact reference to NATO's Article Five. “It is our right as a sovereign state to defend our territory. Every state has the right to choose its way of life.”

Yet Romanians seem to have given up trying to defend that way of life themselves.

According to a defense analyst, of the Romanian navy's three frigates, only one is sea-worthy. The other two, retired Royal Navy vessels, lack guns. Its single, Soviet-era submarine is inoperable because Russia no longer produces the batteries needed to run it. Sixty percent of its defense budget goes to salaries and pensions.

Bucharest pins its security on NATO and the $US400 million U.S. missile base at Desevelu that is an integral component of its anti-ballistic missile shield. Russia sees it as a provocation.

A country of 20 million people, Romania has been a NATO ally since 2004 and a member of the EU since 2007. Still a poor country by European standards (average public sector incomes are between €6,000 and €12,000 a year),Romania's GDP has nonetheless increased almost five-fold since the end of Ceausescu's dictatorship.

Historically and geographically, Romania is poised between East and West. Culturally, the country is more conservative than its Western neighbors. “Though we are Latins in a Slav sea”, one young woman from Bucharest insisted, “we are Orthodox. This is very important to us.”

Four times in the nineteenth century — in 1806-12, 1828-9, 1853-6 and 1877-8 — Russian armies rolled back Turkish power in the name of aiding the Sultan's Orthodox subjects. When Tsar Alexander II visited Bucharest in 1877, crowds cheered the Orthodox emperor. To counter Russian influence, Romanian liberals cultivated a Latin identity and fostered relations with liberal France. Even today, in meetings officials regularly recall the country's (distant) Roman origins and its membership of the Francophonie.

Today, NATO and EU membership seems to have encouraged a classic case of freeloading—and a bolder foreign policy than the country's own defenses would warrant. “On Ukrainian, Georgian and Moldovan membership (of NATO), we must not accept a veto right by Russia”, declared one official. “If we have on our borders a country with different values, different conduct, we are all the losers.”

In neighboring Moldova, however, we found politics divided on relations with the EU. Unlike Romania (with which it shares a language), Moldova (historically 'Bessarabia') was part of the Russian Empire from 1812. A Soviet republic until 1991, it's the object of open rivalry between Russia and the West. Elections last November left power with a Liberal Democratic Party coalition favoring European integration. But, off the record, the Western representatives we spoke to admitted that only dubious election practices prevented victory by the pro-Russian opposition.

Since Brussels launched its 'Eastern Neighborhood Policy' (ENP) in 2009, public support has steadily fallen. Local EU activists lament that only 36% of Moldovans favor EU integration; 42-44% are pro-Russian. Brussels nonetheless signed an Association Agreement with Moldova last June. Owing to a recent banking scandal involving the theft of €1 billion (some 15% of GDP) and a shady businessman with links to the Europe-leaning government, for many Moldovans the EU has itself become synonymous with corruption.

Controversial too is an anti-discrimination law adopted as part of a visa liberalization agreement with Brussels. With 80% of the population identifying with the Russian Orthodox Church, this is seen as the Trojan horse of the Western gay rights movement. The message is reinforced by the Russian television some 55% of Moldovans watch.

Discussions with Moldova's pro-EU liberals quickly reveal the gap between them and public opinion. Like their nineteenth-century Romanian counterparts, they are less representative of society than far ahead of it. To promote Moldova's 'European future', pro-Brussels NGOs have launched an information campaign. It's being funded by the U.S. Embassy.

Remittances from half a million Moldovans working in Russia account for 20% of GDP. But the EU's main problem is that, for the moment at least, Russian conservativism rather than Western liberalism seems closer to the sympathies of a largely apathetic public. In Gagauzia, a poor autonomous region home to a Turkish-speaking but Russian Orthodox minority, a lonely Western-leaning analyst despaired: “Everybody wants somebody to come in and fix their problems—it's just that in Gagauzia, they want Vladimir Putin to do it.”

“People are very nostalgic about Soviet times”, he went on. “That was the last time there was any public investment. I don't like it but it's true. In twenty-four years of independence, the government (in Chisinau) has done nothing.’