Why America Must Expand its Amphibious Warfare Capabilities 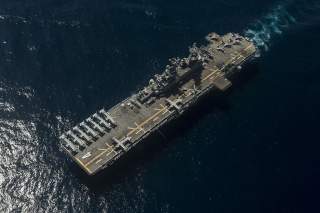 There is too much talk among U.S. national security experts about America’s waning ability to withstand the multitude of threats it faces. Discussions revolve around the U.S’ declining military-technical superiority, the rise of asymmetric threats and the explosion of capability gaps between our military forces and those of prospective adversaries. Defense publications are filled with jeremiads about the obsolescence of U.S. aircraft carriers, main battle tanks and fighter aircraft. The U.S. is under threat due to the proliferation of precision guided missiles, the susceptibility of our communications networks to electronic and cyber attacks and the vulnerability of any fixed installation to a storm of artillery shells, rockets and cruise missiles. According to these prophets of gloom, Russia is about to dismantle NATO, China will soon drive the U.S. Navy from the Western Pacific and Iran is on the verge of having the ability to close, albeit only temporarily, the Persian Gulf.

It’s time we all took a deep breath. It is true that decades of underfunding, failed programs and misguided modernization strategies have resulted in areas of significant military weakness. But at the same time, the U.S. Armed Forces possess a number of asymmetric advantages. While it is important to shore up areas of weakness and close serious technological and operational gaps, it should be an equal priority to leverage and even increase investment in areas where the U.S. maintains a competitive advantage.

One of these areas is amphibious warfare. No other military in the world possesses the organization, experience, systems and platforms to operate amphibious forces like the Navy-Marine Corps team. It would take any of the leading nations decades to duplicate the power projection capability of today’s U.S. amphibious force. For instance, Russia had to look abroad to France for modern amphibious warfare ships. The combination of flexibility, agility and sovereign basing at sea that U.S. amphibious forces provide are likely to be of increased value not only to the U.S. but its allies as well.

The Navy’s amphibious warfare fleet consists of several classes of ships that together provide the basis for moving Marine Corps personnel, vehicles, aircraft, helicopters and supplies anywhere in the world and sustain operations off foreign shores. The largest ships, the LHDs and newer LHAs, are essentially small aircraft carriers capable of operating short takeoff/vertical landing aircraft such as the F-35B, the MV-22 Osprey and a range of attack and transport helicopters. They also possess advanced command, control and communications systems and have storage for equipment including armored vehicles, artillery and trucks. The smaller LPD amphibious transport docks and LSD dock landing ships are primarily designed to deliver Marine Corps units and their equipment and supplies ashore. Each also can operate a few helicopters.

The combination of specially designed and equipped amphibious warfare ships with a tailored Marine Corps air-ground task force provides U.S. Combatant Commanders worldwide a capability that is both unique and relevant. Marine Expeditionary Units/Amphibious Ready Groups (MEU/ARGs) are able to project tailored and sophisticated power ashore to perform missions that span the spectrum of crises and conflicts. Based primarily on the larger amphibious assault ships, the MEU/ARG can project significant air power, as well as deploy a potent land capability from ships standing miles out at sea.

The Navy’s contribution to this unique asymmetric capability is its fleet of 34 amphibious warfare ships. Today the Navy-Marine Corps have a requirement for 38 amphibious warfare ships, sufficient to deliver two Marine expeditionary brigades across a hostile shore. But budget limitations have forced the Navy and Marine Corps’ existing fleet to accept a smaller number of ships. At 34 ships, the fleet is sufficient enough to allow for the continuous deployment of three MEU/ARGs in peacetime. The newly proposed larger Navy fleet would add, in addition to other types of ships, four amphibious ships to reach the desired total of 38.

The demand for MEU/ARGs exceeds the supply. As a result, combatant commanders have taken to breaking up these units, sending individual ships on different missions. Splitting up the MEU/ARG inevitably reduces its overall combat power. In addition, the Marine Corps has established a Special Purpose Marine Air-Ground Task Force, a MEU-size unit without the ships, in Moron, Spain to provide a crisis response capability in the Mediterranean. It would make more sense to increase the number of amphibious warfare ships in order to deploy an additional MEU/ARG.

The U.S. needs to expand this unique asymmetric capability to conduct air-ground operations from the sea. The sea services need more and better amphibious ships. In particular, the Navy needs to move rapidly to procure the LX(R) as a replacement for the aging LSDs. It is reported that this new class of ships will be based on the proven LPD-17 design but incorporate innovative technologies. The LX(R) will have greater space for critical equipment, a well deck for the movement of forces and material from ship to shore and enhanced command, control and communications. Commonality with the LPD-17 will reduce the construction and life cycle costs of the LX(R).

The U.S. should build a larger amphibious fleet. Given the conflicts in the Middle East and North Africa, there needs to be a MEU/ARG regularly deployed in both the Mediterranean and the Arabian Sea. In addition, it is important to have two of these formations forward operating in the Western Pacific. This requires no fewer than 38 amphibious ships. The unraveling of the post-World War II international order cries out for a larger and more modern U.S. amphibious warfare capability.