Why America Must Overhaul its Military 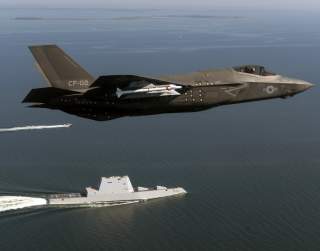 The United States needs to make major changes to the composition and structure of its armed forces. Great power competition is reemerging and the threats posed by transnational terrorism and nuclear-armed rogue states are likely to persist, even as U.S. conventional advantages are diminishing in the face of Chinese and Russian military modernization. If the United States is going to continue to effectively deter conflict and defend allies and interests in key areas such as Europe, the Western Pacific, and the Middle East, America needs a future force that is well-adapted to this more challenging landscape. This requires a ready, modern, and balanced force that is more capable against sophisticated adversaries, maintains strategic deterrence and stability, can effectively project military power to key regions, and can simultaneously counter terrorism and enable partners.

The Center for Strategic and Budgetary Assessments recently hosted a Strategic Choices Exercise, where defense analysts from a number of think tanks took turns designing their optimum future force. The Center for a New American Security team, composed of Jerry Hendrix, Paul Scharre, and Elbridge Colby (CNAS does not take institutional positions), adopted a strategy of maintaining readiness for today’s threats while modernizing the force for emerging challenges. Both today and in the future, this force is prepared to defend the homeland against terrorist, missile, and cyber attacks; project power globally into anti-access areas; deter and defeat regional aggression; maintain a stabilizing presence abroad; and sustain our nuclear deterrent. By investing in a diverse high-low mix of forces for the range of missions DOD faces rather than attempting to field a one-size-fits-all “utility infielder” force, we modernized the force while maintaining capacity. We grew the total number of ships in the fleet; increased tactical fighter aircraft and stealthy bombers; preserved Army active duty end-strength while modernizing Army capabilities; modernized all three legs of the nuclear triad and associated infrastructure such as command and control; increased investments in critical R&D areas; and preserved special operations forces and intelligence, surveillance, and reconnaissance assets for counterterrorism. We did this within a modest 2% increase in defense spending above PB17 levels – a realistic level given the political dynamics in the United States. We were able to afford these investments by making hard choices in efficiencies and cuts to legacy forces that are of declining utility.

Navy: The Navy is forward deployed 24/365 defending and promoting the nation’s long-term national interests in 18 maritime regions.  It keeps the peace by strongly demonstrating American resolve, serving as both a preventive and a war fighting force. However, dramatically falling fleet numbers have created deployment gaps, opening opportunities for rising powers to destabilize the international order. To answer these challenges, we grew the Navy fleet 27% from today's 272 ships to 345 in ten years by pursuing a balance between highly sophisticated destroyers and cruisers and low-end high-speed platforms outfitted with missiles, lasers, and rail guns. Given America’s asymmetric advantage undersea, we aggressively expanded the Navy’s undersea warfare capabilities, increasing submarines from 58 to 74 and expanding undersea strike capacity by 680 cruise missile tubes. We funded these investments by terminating the Ford- and America-class carrier production lines in light of their costs and vulnerability to anti-access/area denial (A2/AD) threats.  This does not mean that we eliminated aircraft carriers from the force, but rather set up a process of steadily riding the carrier inventory downward over the next 50 years as existing carriers retire. We also curtailed the current amphibious fleet (LPD/LSD) in light the challenging environment in the littorals.  We preserved Marine expeditionary and crisis response missions by shifting to cheaper commercial-derivative (“black hull”) expeditionary sea bases, resulting in a larger overall expeditionary lift capacity.

Air Force: We invested in a high-low mix of aircraft, freeing up stealthy aircraft for the most challenging missions, and invested heavily in next-generation technologies to preserve U.S. airpower dominance. We grew the total number of Air Force tactical fighter and attack aircraft by 180 aircraft and increased the number of stealthy bombers, which can operate deep within A2/AD environments, by 44% by increasing the B-21 bomber buy. We invested in a new land-based stealthy uninhabited combat air vehicle (UCAV) to team with F-22s, F-35s, and B-21s in A2/AD environments. Additionally, we invested in new technologies and concepts of operation: advanced air-to-air and air-to-ground munitions; collaborative munitions; low-cost attritable swarming platforms; and directed energy weapons paired with uninhabited (unmanned) aircraft to create long-dwell platforms with virtually bottomless magazines. To facilitate distributed basing operations inside A2/AD environments, we invested in additional KC-130J tanker aircraft. We preserved airlift and non-stealthy uninhabited intelligence, surveillance, and reconnaissance aircraft. We were able to fund these investments by reducing quantities of non-stealthy bombers (particularly B-1s), leveraging a high-low mix of assets, and investing in a “manned-unmanned” mix of assets. We modestly trimmed fifth-generation fighters, reducing F-35B and F-35C buys consistent with reductions in carriers and reducing F-35A quantities by 60 aircraft over a 10-year period.

Army and Marine Corps: On land, we invested in ready, modern, and forward-stationed ground forces oriented primarily to deter Russian aggression in Europe. We preserved overall active duty Army end-strength at approximately 450,000, while shifting force mix from light infantry to armor, precision fires, missile defense, and electronic warfare. We increased active duty armored brigade combat teams (BCTs) from 9 to 12 and replaced aging Bradley fighting vehicles with a new infantry fighting vehicle derived from the German Puma. We invested in advanced technologies such as active protection systems, unattended ground sensors, additional precision-guided munitions, and human performance enhancement. Furthermore, we were able to leverage robotic air and ground logistics systems to reduce costs, allowing us to reinvest those savings in additional combat power.  Given the significant reductions to-date in Army active duty force structure, cuts to overall ground force size came from an 11% reduction in the Army reserve component and a 5% decrease in the size of the Marine Corps. Two Advise and Assist Brigades (AABs), consisting of 3,000 total personnel, were created which can form the leadership core of future reconstituted BCTs, if necessary.

Strategic Systems: We modernized all three legs of the nuclear triad, and also invested in modernized nuclear command and control in order to preserve a second-to-none strategic deterrent. This is essential to preserving strategic stability in an era when it will be more in question due to novel military technologies such as cyber, space, autonomous and uninhabited systems, and precision conventional strike. We also invested in both offensive and defensive strategic cyber capabilities and a more resilient space architecture. We roughly doubled the inventory of ground-based interceptors to deal with ballistic missile threats to the homeland, particularly from North Korea. We also investing heavily in new technologies such as electromagnetic rail guns and high velocity projectiles to bend the cost curve and increase defensive capabilities against ICBMs as well as theater ballistic and cruise missile threats from countries such as China and Russia.

Readiness and Combat-Credible Forward Presence: A ready and present combat-credible force is an essential element of deterring aggressors, and we increased investments in readiness, forward presence, and building partner capacity. Given the readiness shortfalls inflicted on the force by sequestration, we increased flying hours and depot maintenance above PB17 levels across the FYDP in order to reset the force. We also heavily invested in overseas posture. We forward deployed two additional carriers and additional attack submarines and destroyers in the Pacific, and shifted two armored BCTs, a Stryker BCT, and a combat aviation brigade to Europe. We also invested in airfield dispersal, rapid runway repair, and at-sea reloading capacity for vertical launch system (VLS) tubes to improve the joint force’s ability to sustain combat power forward in contested areas. We further invested $2 billion in improving partner bases for U.S. access and logistics. We also improved DOD’s ability to build partner capacity by expanding security force assistance training, creating two Advise and Assist Brigades in the Army, and investing in a small squadron of light attack aircraft for training partners in low-end air capabilities. These initiatives will allow U.S. forces to integrate with allied and partner efforts to strengthen their defenses, especially at the middle and lower-levels of capability, including dealing with “gray zone” threats.

Management: Across the Department, we sought opportunities to increase efficiencies and streamline processes. Through headquarters de-layering, leveraging automation to replace jobs, and seeking process efficiencies, we reduced the overall size of DOD’s civilian workforce by 5% and the number of contractors by 8,000, saving over $55 billion across 10 years. We trimmed an additional $27 billion over 10 years by initiating Base Realignment and Closure, eliminating commissary subsidies, and raising TRICARE fees. These savings were reinvested in warfighting capabilities to sustain a ready, modern, and forward-present joint force.

The force we presented in this exercise is remarkable for its increased size and ability to cover the widest range of contingencies. This force would be well-poised to effectively handle the main challenges of the emerging geopolitical landscape. It provides significant conventional advantages, maintains strategic deterrence and stability, preserves the ability to counter terrorism, and ensures the United States can act decisively against rogue states possessed of or seeking nuclear weapons. It does all of these things at a cost the American people are willing to pay for.  The proposed force seizes opportunities presented by new technologies by marrying established platforms with new capabilities to achieve dramatic effects. We reached these goals by being willing to make the hard choices to cut legacy systems that have declining utility, by investing aggressively in cutting edge research and development, and by seeking balance between quality and quantity. The resulting force regains the ability to maintain the peace as well as respond to crises on a global scale, sustaining American military power for years to come.