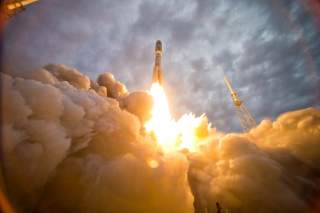 Space launch vehicles usually require multiple stages to accelerate the spacecraft to speeds necessary to place payloads in their intended orbits. The first or boost stage, at the base of the rocket, is the largest and produces the greatest amount of thrust as this is when the launch system is the heaviest. Upper stages are generally smaller and lighter, exploiting the work done by the first stage to provide the final, high performance acceleration to the speeds required to attain an orbit above the atmosphere.

Both first and upper stages may have more than one engine depending on the weight of the payload and/or the desired orbit. For some missions, additional rocket engines may be strapped to the outer casing of the launch vehicle to supply greater thrust to provide adequate speed for the more massive payloads.

For national security reasons, the United States requires at least two launch systems to be available. The U.S. Air Force and NASA currently rely primarily on three space launch vehicles: Delta IV and Atlas V, both operated by the United Launch Alliance (ULA), and SpaceX’s Falcon 9. Because the Atlas V is the cheaper of the two to operate, the Delta IV is reserved for use with payloads and orbits that the Atlas V cannot handle. However, the Atlas V currently uses a Russian-designed and produced first stage engine, the RD-180.

In recent years, attention and resources have been focused on developing an alternative to the RD-180 because dependence on a Russian engine is considered to be a strategic vulnerability from a national security perspective. Congress set a deadline of 2022 for termination of government purchases of the RD-180. Without an alternative to the Atlas V/RD-180 combination, the nation would incur a serious risk to national security.

The Air Force has accepted the requirement to find an alternative to the RD-180 for the Atlas V. In 2016, it awarded contracts to four companies to develop new first stage rocket engines: Aerojet Rocketdyne for its AR1 kerosene-fueled engine; a team of ULA and Blue Origin for the latter’s BE-4 methane-fueled engine; SpaceX for the Raptor, a reusable engine that also uses methane for fuel; and Orbital ATK for multiple prototype engines supporting new launch vehicle designs.

In addition, the Air Force issued a request this past October for proposals to develop a new space launch vehicle which, without question, would use American-built rocket engines. ULA is proposing the Vulcan as the next-generation system to replace both the Delta IV and Atlas V. The Vulcan could use either the AR1 or BE-4 as its first stage engine. However, as the president of ULA, Tony Bruno, has acknowledged, until the Vulcan is ready there is no option but to rely on the Atlas V. Consequently, developing an alternative American-made first stage engine is imperative.

Fortunately, there are a number of available options for a better upper stage engine. The lowest risk solution probably would be to improve the current variant of the RL10.  Aerojet Rocketdyne is pursuing new materials and production techniques to further improve the RL10’s performance and reduce procurement costs.

The ULA plans to initially operate the Vulcan launch vehicle with a Centaur second stage and replace it sometime in the next decade with the Advanced Cryogenic Evolved Stage (ACES). The ACES upper stage could use the RL10 or the smaller version of Blue Origin’s BE-4, the BE-3 engine.

For some time, SpaceX will rely on improved versions of its Merlin engine for both the first and second stages of its Falcon 9 and Falcon Heavy space launch vehicles. However, a variant of the Raptor could be a second stage option for the Falcon or other launch systems. By burning methane in a staged combustion system, the engine will use less fuel and operate at lower temperatures.

Another option is a vortex engine pioneered by the Sierra Nevada Corporation (SNC) through its ORBITEC group. The vortex rocket engine utilizes a unique swirling propellant flow to naturally cool the engine walls, instead of using precious fuel for cooling. As a result, the vortex engine is relatively simple to build and requires less fuel to place a payload in orbit. These features translate into greater efficiency and significantly reduced engine and launch costs.

SNC/ORBITEC have successfully tested the engine with multiple fuel combinations, including hydrogen, kerosene and methane. This is remarkable progress in light of the fact that until now, ORBITEC has relied primarily on funding through small business innovative research grants. SNC is rapidly maturing ORBITEC’s vortex engine.

It is time to get serious about restoring American preeminence in space launch. For less than the money that has been provided so far to develop a replacement for the RD-180, about $500 million divided among the four prospective developers, the Air Force could have multiple upper stage engine options by the early 2020s. Advocates in Congress for an American-made replacement for the RD-180 also need to pay attention to this issue because they are closely related and could lead to a lower-cost boost stage engine that does not need the complexities of the RD-180.