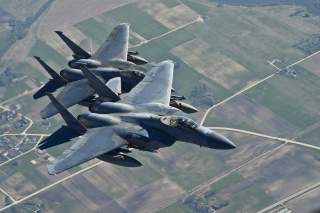 Unmanned aerial vehicles, or drones, in the hands of this country’s adversaries, both states and terrorist organizations, pose a severe and growing challenge to the U.S. military. Russian-backed separatist forces in Ukraine have employed drones with precision targeting systems to support massed artillery fire against government forces. ISIS is making extensive use of drones to watch the movement of Iraqi forces. Some unmanned systems have carried explosives.  Hamas and Hezbollah have repeatedly sent drones into Israeli airspace. China, Iran and other prospective adversaries are busy fielding drones of various sizes and capabilities. Criminal cartels are using hobby-shop drones to move drugs across our southern border.

All the relevant technologies are proliferated around the world, making it relatively easy for even small nations and terrorist groups to build and operate them. The airframe can be made from cheap materials. They can be powered by battery-driven electric motors found in gardening implements. They need no better guidance system than the GPS that can be found in the average cell phone. But if you want command guidance you can get a small video camera almost anywhere and route the feed through that same cell phone connected to the local communications network. They can be built in a garage and launched from the driveway.

The proliferation of drones to hostile states and groups is altering the tactical battle space. For the first time, non-state adversaries have an air force. Equipped with high quality cameras, drones provide terrorists and insurgents with critical intelligence and targeting information. Loaded with even a few pounds of explosives, drones are precision-guided weapons able to be used against fixed and even mobile targets, something our adversaries lack in their current inventories of rockets and missiles. Deployed on ships, drones provide adversaries with a low-cost “aircraft carrier.” The head of the National Counterterrorism Center opined “It is conceivable that some day soon we will see someone’s otherwise capable military security force penetrated, defeated or even overrun by such technologies.”

Small drones pose three distinct challenges to advanced militaries different than either manned aircraft or missiles. The first is detection. Because these drones are small, fly low and are very quiet, they would be difficult to spot with traditional radars. Many of them have few metal pieces, further reducing the ability of most radars to find them. There might be no warning of an attack.

The second challenge is engagement opportunities. Smaller, agile and low flying drones are difficult to hit with small arms, machine guns and cannons. Even larger unmanned aircraft are relatively hard to engage with many existing air defense systems. In addition, it is desirable to find ways of defeating unmanned vehicles without the risk of debris falling on cities and civilians.

The third is the cost-exchange ratio. Israel has employed high-performance fighters and even Patriot air defense missiles to down Hamas and Hezbollah drones. This is using million dollar missiles to intercept unmanned systems worth a couple of thousand dollars. This is unacceptable. The counters to small, cheap drones, in particular, must be equally low cost.

There are a variety of potential solutions to the problem of finding and defeating drones, particularly small lightweight vehicles and quadrotors. A number of these have been tested by several U.S. agencies with the idea of acquiring them for surveillance of ultra-light aircraft and small drones operating in sensitive airspace. Last year, the Department of Defense conducted annual counter drone demonstrations. The challenge is to find an integrated system that is easy to deploy, simple to operate and can not only detect but defeat hostile drones.

Now, the U.S. Air Force has moved out on acquiring just such a system. The Drone Guard system, developed by the ELTA subsidiary of Israeli Aircraft Industries, is a highly sophisticated, yet man-portable system. It is an advance on the earlier MARS-K system which demonstrated the ability to detect and track a wide variety of small drones, including hovering quadrotors. The Drone Guard system integrates the ELM-2026 family of high-end military 3D radars with electro-optical sensors for detection and identification of drones into a compact and easy to use system.  To this has been added sophisticated jamming technology which can break the communications links between the drone operator and the unmanned vehicle or possibly even fry their internal electronics.

The Air Force has awarded ELTA North America a contract for 21 Drone Guard systems. These systems can be employed to protect critical installations, such as airfields, special events and personnel. The Drone Guard is packed into a couple of duffel bags and can be set up and broken down for transport in a matter of minutes. This man-portable system can be deployed without the need for complex supporting infrastructure or interference with other activities such as airfield operations.

The Air Force is the first of the military services to acquire Drone Guard but it is unlikely to be alone in this innovation. Drone Guard is a solution to the need of early arriving Army and Marine Corps units for an immediately available counter-drone defense. This system also would support the Army’s efforts to rebuild its short-range air defense capabilities.  The Navy can employ the system to protect shore installations and even ships in foreign ports.  Rather than re-inventing the wheel, the U.S. military should acquire Drone Guard and move on to address other capability gaps.