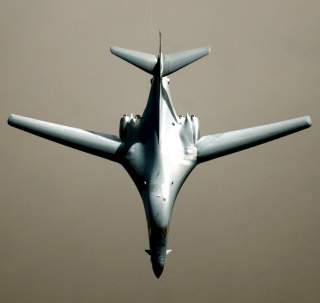 In the days after North Korea’s inaugural test of an intercontinental ballistic missile, pairs of U.S. Air Force B-1 Lancers based in Guam took off and flew close to the authoritarian state — linking up with South Korean and Japanese fighters along the way.

On July 7 and 8, pairs of the 150-foot-long jet bombers — one of America’s most powerful warplanes — carried out the missions, termed “demonstrations” by the Pentagon.

The high tempo of bomber flights in the Pacific is not entirely new.

Lancers based at Andersen Air Force Base in Guam are flying show-of-force missions at an accelerating rate, according to a recent report from Air Force Magazine. These so-called higher headquarters-directed missions from Andersen, including the recent flights near North Korea, numbered 73 in 2016, according to the magazine.

The Air Force expects the number of such missions from Andersen in 2017 to far exceed 2016. “We’re probably going to approach a potential of doubling it again this year,” Air Force Brig. Gen. Stephen Williams told the magazine.

The B-1 is one of the Air Force’s three classes of long-range heavy bombers along with the B-2 Spirit and B-52 Stratofortress, but the B-1 does not carry nuclear weapons unlike the other two. Given this fact, the Air Force treats the Lancer as a workhouse, and regularly sent the variable-sweep-wing bomber on intensive missions over Iraq, Afghanistan and Libya for more than a decade.

During the Lancers’ most recent combat mission, until February 2016, the bombers dropped 3,800 munitions on Islamic State during a six-month deployment.

Jumbo, eight-engine B-52s then flew into Al Udeid Air Base in Qatar and took over for the B-1s, which entered depots for an upgrade to all-digital cockpits. Most of the Lancers were built in the 1980s and retain tech from the era.

From Guam, the U.S. military carries out what it terms the “Continuous Bomber Presence,” or CBP mission. The idea is to regularly rotate Lancers, Stratofortresses and Spirits through Andersen as a means of deterring North Korea and China.

In a rare sight, all three bomber types shared the same runway when the Lancers arrived last year.

The B-2 is few in number — 20 in total including one in a test squadron — and is getting old. That leaves the bulk of the CBP mission to the B-1 and the B-52, the latter which dates to the 1950s but which has been continually upgraded.

While these bomber rotations are regular occurrences, a B-52 crashed and burned at Andersen in May 2016. In 2008, the Air Force pulled its B-2s out of Guam after one of the stealth bombers crashed following a sensor failure.

The B-1 with its 75,000-pound payload can dish out a tremendous amount of firepower — more than than the B-2 and B-52 if not counting those bombers’ nuclear weapons — which the American president can call on to strike North Korea’s missile sites.

A single Bone can carry up to 84 500-pound bombs or two-dozen 2,000-pound Mk-84 bombs. In addition, it’s capable of long-range striking power with 24 AGM-158 JASSM missiles, allowing strikes deep into North Korea from hundreds of miles away.