Why America's Biggest Nuclear Weapons Test Ever Was a Total Disaster 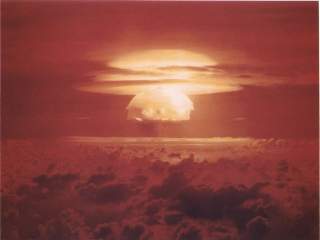 Sixty-plus years ago on an island in the South Pacific, scientists and military officers, fishermen and Marshall Islands natives observed first-hand what Armageddon would be like.

Scientists estimated the device would have a yield of about five megatons. They based many of their safety precautions — such as the location of various observation posts and ships, a safety “exclusion zone” in the Pacific Ocean surrounding Bikini and estimates of fallout dispersal — on a five-megaton yield.

“In mere seconds the sailors sensed that something unspeakably wrong was occurring … Battle-hardened men who had served in World War II went to their knees and prayed,” wrote L. Douglas Keeney in 15 Minutes: General Curtis LeMay and the Countdown to Nuclear Annihilation.