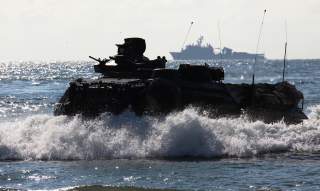 The U.S. military has a dilemma. Having forgone more than a generation of modernization and facing rising adversaries who are investing in modern military equipment, it has to make a choice: focus on near-term modernization, buy what is available in order to close the gap with adversaries or make a bet to hang on for another decade or two until a new generation of superior technologies is available.

The Obama Administration’s Department of Defense has been pushing something called the Third Offset Strategy intended to restore U.S. technological advantages over other powers in large part by exploiting advances in commercial information technology, computing and data management. The results of this effort won’t really be known for many years to come. It will also require spending lots of money on research and development for weapons systems that, in the end, may not pan out. What does the U.S. military do in the meantime as Russia threatens U.S. allies in Europe and China deploys weapons on its artificial islands in the South China Sea?

The Army and Marine Corps are the two services most challenged by the choice between near-term and far-term modernization. Both initially bet on revolutionary capabilities that proved too challenging to develop, were too costly or both. The Army had the failed Comanche helicopter, Future Combat System and Ground Combat Vehicle programs and the Marine Corps the Expeditionary Fighting Vehicle. As a result, both are facing the near era of great power rivalry with very limited options when it comes to modernization, particularly for ground combat systems.

Furthermore, both services confronted a Pentagon and a defense intellectual community that for years dismissed the possibility of future great power conflicts, and disparaged the role of land power both in deterring major wars and in fighting and winning future conflict. Then there was the understandable but neuralgic reaction of the political class to the protected stability campaigns in Iraq and Afghanistan. If you believed in the fantasy that the arc of history no longer existed and think that this country should not be involved in long-term stability operations, it is easy to dismiss the need for land power and, thus, not provide the necessary resources to maintain a ready and modern force.

Now, the prospects for great power competition and even major wars are back with a vengeance. The central focus of this competition is control of land, whether it is Crimea, Eastern Ukraine the Baltic States, the Arctic or artificial islands in the South China Sea. But the Army has no new armored combat vehicle in development. Its Future Vertical Lift program currently is expected to deliver the next generation of combat and utility helicopters sometime in the 2030s. The Army has only two new vehicle programs, the Joint Light Tactical Vehicle, essentially an armored truck, and the Armored Multipurpose Vehicle, based on the Bradley Fighting Vehicle. The Army has no choice with respect to armored combat but to modernize its existing fleets of Abrams tanks, Bradleys, Strykers and Paladin artillery pieces.

An interesting model of how to address the near-term versus far-term modernization dilemma is the Marine Corps program to develop and deploy a new amphibious combat vehicle in the aftermath of the failure of the Expeditionary Fighting Vehicle program. The Amphibious Combat Vehicle (ACV) program is intended to replace the forty five-year old Amphibious Assault Vehicle (AAV) designed to carry a squad of Marines. The Marine Corps recognized that it could not wait for the gold standard, an armored fighting vehicle that could move under its own power from ship-to-shore while carrying a reinforced rife squad and then support them in combat. It had to acquire something in the near-term that was better than what it had while it funded development of an even more ambitious platform in the far-term.

So, the ACV program is divided into three increments, version 1.1, 1.2 and 2.0.  The first will provide the Marine Corps with some 200 relatively low cost wheeled vehicles based on an existing design. Increment 1.1 vehicles will require a ship-to-shore connector to deploy to the beach with improved survivability, mobility and firepower compared to the AAV. Increment 1.2 is envisioned as a significantly more expensive, possibly self-deploying vehicle, with greater survivability and lethality than Increment 1.1. The Marine Corps has left open the possibility of merging the two increments depending on the rate of progress in fielding Increment 1.1 and in the R&D on Increment 1.2. Increment 2.0 will be the “Holy Grail,” a high-water speed, self-deploying armored fighting vehicle. The Marine Corps has left open the possibility that if Increment 2.0 proves too technologically challenging or costly, it will buy more Increment 1.2 vehicles and additional ship-to-shore connectors.

It turns out that this approach is working out. BAE Systems, one of two companies vying to provide the Marine Corps with its next generation ACVs, has delivered the first four of the required 16 test vehicles ahead of schedule. This is particularly impressive given that the current program was only defined a little more than two years ago. Based on a design provide by the Italian company, Iveco, the BAE offering is capable of transporting a rifle squad of 13 plus a three man crew, with a powerful 700 horsepower engine, a V-hull for protection against improvised explosive devices and advanced communications equipment. An active protection system could be added to improve vehicle survivability against anti-tank rockets and missiles.

BAE is deeply involved in near-term modernization of the Army’s combat vehicle fleets. It is upgrading the venerable Bradley, producing a Bradley-variant as the AMPV to replace the M-113 in the armored brigade combat team and providing an improved Paladin self-propelled artillery piece. If it wins the competition to produce the ACV, what it learns in this program could also help with near-term modernization of Army vehicles.