Why America’s Space Launch Must be Competitive 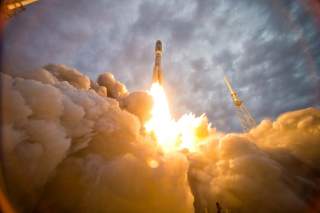 The Sept. 1 pad explosion that resulted in SpaceX losing a Falcon 9 rocket and the associated commercial communications satellite may have been frustrating to those responsible for the mission or financial costs, but looking at the data and trend analysis associated with space launches gives a reason to have confidence that SpaceX will successfully return to space with a launch on Saturday, Jan. 14. Moreover, there should be broad encouragement for such a fast and robust recovery in that such a highly adaptive and efficient space launch company (or two or three or five) is just what this country needs. The U.S. (to include both government and private industry) needs a competition driven launch industry wherein a healthy free market rivalry brings down cost, promotes innovation, and expands market opportunities. Without competition, the U.S. would continue to face stagnant launch system development, shoulder increasing costs, and accept limited access to space.

Putting people and satellites into orbit around the earth has been, historically, very expensive. What’s more, until 2012 there was very little market incentive to lower costs. However, in this decade new companies like Blue Origin, Orbital ATK and SpaceX created a new market incentive by forming themselves as privately funded companies seeking to join the space launch sector. Before 2012 NASA’s traditional launch partners, Lockheed Martin and Boeing (which merged their launch sectors in 2006 to form United Launch Alliance), were the only private sector U.S. companies to receive government contracts as a launch service. While ULA can proudly point to its perfect launch record, until SpaceX entered the market in 2012, the joint Boeing and Lockheed venture presented static launch vehicle designs and either flat or rising cost curves.

To place cargo in low-earth orbit, SpaceX currently charges $4,653 per-kilogram, Orbital ATK has a medium rate of $28,000 per kilogram, ULA charges $14,000-$39,000 per-kilogram , and finally, the cost to use Russian launch systems between 2006 and 2018 is estimated to be $3.4 billion for 64 total seats to ferry astronauts to and from the International Space Station. What’s more, in a study conducted by NASA to estimate the cost to develop the Falcon 9 launch vehicle using two different approaches (traditional NASA environment and culture approach and a commercial development approach), NASA assessed that the commercial cost was considerably less than anything the NASA culture/environment could have produced. In NASA’s research, they estimated that SpaceX could produce the Falcon 9 for $443 million compared to NASA’s $1.38 billion. Because of this innovative and competition driven strategy SpaceX, at the tender age of 14, has already been awarded $10 billion in contracts from both the government and private industry despite the launch failures SpaceX has experienced along the way.

This is a good thing. It shows the market’s trust in the commercial sector broadly and SpaceX specifically, and there is hope that other smaller commercial companies can join the competition. Despite the Sept. 1 anomaly, SpaceX still has a stellar (pun intended) record. According to defense analyst at Forecast International, SpaceX’s reliability with the Falcon 9 is still 93 percent compared to the industry average of 95 percent. Let’s also not forget that SpaceX is the only organization to launch and land a booster stage for the purpose of reuse not once, but six, times.  Bottom line, launching a rocket into space is highly complicated but if the failure is met with a persistent determination to innovate and compete, the market can bear their occurrence.

Similarly to how SpaceX has proved highly innovative, ULA, Blue origin and Orbital ATK have had their moments to shine as well. On September 4, 2016 ULA’s Delta IV launched NASA’s first asteroid sampling mission, OSIRIS-REx. In addition, ULA, in partnership with Blue Origin, has set out to create the liquefied natural gas powered BE-4 booster engine which stands to be part of the Vulcan rocket, the replacement for the current Atlas V.  ULA is also working to produce the Advanced Cryogenic Evolved Stage (ACES), which promises to use the same propellant load but provide longer on orbit mission capability with greater electrical power to payloads for less cost. Meanwhile, Orbital ATK is working on its new Next-Generation Launcher to give the company a competitive edge in the heavy lift sector. Innovation in the commercial launch sector is driven largely by free market competition. It’s the foundation of any private company: the need to innovate and provide new and more efficient services in order to be competitive and succeed, or at bare minimum, survive among industry competitors.

More broadly, in 2016 there were 85 orbital launches globally. The U.S. had the most of any individual nation with 22 successful launches, 0 launch failures, 1 launch pad failure, and 0 partial failures. Second was China, with a record of 20-1-0-1 and Russia rounded out the top three with a record of 18-1-0-0. What’s interesting about these records is that of these orbital launches, all US launch vehicles were produced by privately held companies, ULA (12 launches), SpaceX (8 launches) and Orbital ATK (2 launches), which collectively completed as many launches as Europe (9 launches), India (7 launches), Japan 4 (launches), Israel (1 launch), and North Korea (1 launch) combined.

Due to both cost and increasingly unreliable launch services NASA, as a consumer of Russian launch capabilities, is eager for alternatives. In a recent announcement, NASA awarded contracts to SpaceX and Boeing for four additional crew rotation missions to the International Space Station bringing the total number of NASA manned missions awarded to private companies to six. While Boeing and SpaceX have yet to test their manned flight vehicles, both companies are planning to begin testing in 2018 and 2017 respectively.

The US needs these manned launch services to be successful. To be successful, the commercial launch sector needs competition. Fortunately, it appears that the arc of history with regard to space flight within the United States bends toward success.