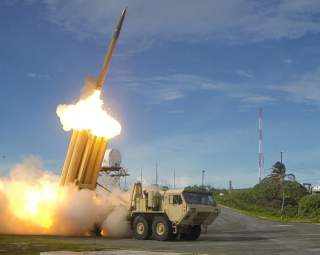 The U.S. Terminal High Altitude Area Defense system (THAAD) deployed to South Korea earlier this month and while the missile-muting shield is meant to keep North Korean nuclear ambitions in check it is also driving the Chinese to distraction.

Beijing sees THAAD as an escalation against their own missile forces and have argued and fought against the system’s deployment since the idea was broached as North Korea began slinging its rockets farther.

American analysts and other experts says the Chinese may have a point.

"Continued provocative actions by North Korea, to include (the recent launch of a) launch of multiple missiles, only confirm the prudence of our alliance decision last year to deploy THAAD to South Korea," Navy Adm. Harry Harris, Pacom commander, said in a statement. "We will resolutely honor our alliance commitments to South Korea and stand ready to defend ourselves, the American homeland and our allies."

The THAAD system is a strictly defensive capability, and it poses no threat to other countries in the region, Pacom officials said. It is designed to intercept and destroy short- and medium-range ballistic missiles inside or outside the atmosphere during their final phase of flight.

“THAAD interceptors do not necessarily add much capacity to counter the North Korean missile threat to South Korea,” Bryan Clark a military analyst for the Center for Strategic and Budgetary Assessment (CSBA) tells Scout Warrior. “They are designed to intercept faster, longer-range ballistic missiles as they start their terminal phase after they reenter the atmosphere. The short-range ballistic missiles North Korea would use against South Korea can be defeated by Patriot PAC-3 and PAC-3 MSE, which are less expensive and carried in larger numbers by U.S. forces. Note that THAAD interceptors cost about $11 million each and Patriot interceptors cost between $2 and 4 million each. Although they use different launchers, 4 PAC-3 interceptors can fit into the same launcher space as one THAAD, increasing the defensive capacity of U.S. forces.”

He also says, “THAAD also provides a longer-range BMD capability that may force an attacker to create more complex salvos to defeat U.S. missile defenses. If the only BMD U.S. forces have is shorter-range PAC-3, an adversary may send in less sophisticated and cheaper ballistic missiles. With a longer-range BMD capability, U.S. forces could intercept some number of ballistic missiles faster away, compelling attackers to use more decoys, penetration aids, ad maneuvering missiles, making salvos more expensive.”

THAAD also will be useful against longer range ballistic missiles that North Korea or China may use against Japan or other targets in the Pacific such as Hawaii or Alaska, he points out. “This may be part of China's concern about the THAAD deployment. It may represent a forward missile defense capability for U.S. forces against China, similar to how Aegis Ashore in Europe represents a forward missile defense capability against Russia.”

Robert Haddick, a former U.S. Marine Corps officer with service in East Asia and Africa who more recently has been a research contractor for U.S. Special Operations Command, and wrote the book, “Fire on the Water: China, America and the Future of the Pacific,” also sees why a THAAD deployment would upset Chinese officials.

“As for China's response to THAAD, it seems a little over the top at first,” he says in an email. “But there are two explanations for that. First, Chinese policymakers want to show themselves (and everyone else) that they are making progress on creating dominating leverage over other countries in the region, and also success at reducing U.S. influence and allied dependency on the U.S.  South Korea's decision to approve THAAD and wave it in after the latest North Korean missile shots shows just the opposite. Namely, that China is not succeeding at driving the U.S. out or economically coercing U.S. allies like South Korea (or Japan).”

Second, he says, “China hates THAAD for the same reason that the USSR hated SDI (Strategic Defense Initiative). Both have/had missile-centric doctrines, investments, and force structures. The centralized control that comes with ballistic missile forces fits the culture of those regimes. Now THAAD (and earlier, SDI) threatens that major, major cultural, doctrinal, and financial investment. PLARF (People’s Liberation Army Rocket Force) planners want to be able to calculate with high confidence how many missiles it will take to reduce certain target sets. Highly effective missile defense systems like THAAD upset all that work and investment. Even if THAAD isn't "air tight," it certainly adds great uncertainty to PLARF calculations and basically messes everything up for them. And that makes those officers, and their political bosses, upset.”