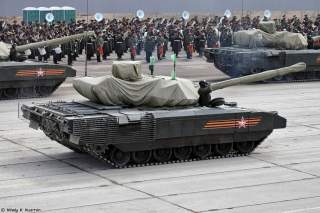 China and India are among the countries that could purchase Russia’s new T-14 Armata battle tank, according to the Russian government.

Vladimir Kozhin, an aide to Russian President Vladimir Putin, tells Russian media that the Russian military will be the first to operate the new tank, which Moscow first unveiled at a parade celebrating the Soviet Union’s victory over Nazi Germany.

“There really is interest, despite the fact that the equipment is expensive,” Kozhin said, according to Russian media outlets. “To a large extent, it is our traditional partners; India, China and South-East Asia.”

The need for China makes sense. Although China has largely settled its land border disputes with neighbors, China’s military still lacks a viable battle tank, despite its valiant modernization efforts,. “China’s main battle tank, the Type 99, is still a derivative of the old Soviet T-72 main battle tank, with a design that stretches back to the mid-1980s,” Kyle Mizokami noted on The National Interest back in May.

On the other hand, India’s land forces are in higher demand, particularly with regards to Pakistan but also other neighboring countries like Sri Lanka and Myanmar, which Indian special forces just conducted a cross-border raid against.

Both countries also have a long history of buying Russian weaponry, including tanks. As just noted, the People’s Liberation Army still relies on the T-72 as its main battle tank. In addition, the Indian army operates the Soviet-built T-90, which is itself a derivative of the T-72.

Delhi also uses other tanks such as the indigenously produced Arjun Mark-1 tank. These have proven unreliable at times, however. Indeed, back in May India announced that most of its Mark-1 tank fleet had been grounded due to technical problems with its transmission system, targeting and thermal sights.

“Nearly 75 percent of the 124 tanks with the Army are grounded," an unnamed Indian Army official told Defense News at the time.

"There are a number of issues related to functionality due to imported components, which seem to be bugging the Arjun Mark-1 fleet for some time now. The technical snags have reportedly led to much of the fleet remaining non operational, creating a void in the tank strength of the Indian Army."

India also operates 118 domestically built Mark-2 tanks, which feature a number of improvements over the Mark-1. The Mark-2 tanks have also reportedly performed well when pitted against the Russian-built T-90s.

Still, the T-14 Armata battle tank would offer both India and China a significant upgrade.

As Robert Farley has noted on The National Interest:

“The main battle tank configuration of the Armata has several strong points. It has a modern armor system, an unmanned turret, and a crew compartment protected from the most common types of enemy fire.  The emphasis on crew protection comes, as many have noted, as part of a new Russian focus on the protection of professional soldiers.”

“The flexibility of the Armata frame gives it a chance on the export market.  Different customers have different needs, and the Armata has the potential to solve a lot of problems. This is particularly the case given that the Armata family is, like the Merkava it’s based on, designed to operate across the combat spectrum.  Armies needing low-intensity combat options could use the Armata in some of its configurations, while armies needing a serious, conventional main battle tank could still find much to like.”