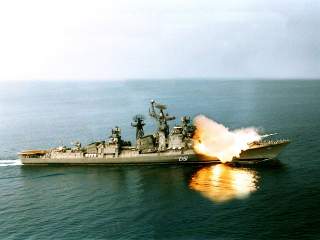 India is poised to sell its sophisticated Akash missile defense system to Vietnam, the latest development in a broad strategic relationship that has grown rapidly in recent years and added a new twist to the spiraling power contest in the South China Sea. The talks, consistent with India’s ambition to be a major arms supplier, were first reported this week by the Times of India.

The medium range surface-to-air missile, produced by New Delhi’s Ministry of Defense, can target aircraft, helicopters and drones up to 25 kilometers away at a time when China is building up aerial defenses over fixtures it claims in the contested maritime area. India has also offered to sell its Varunastra anti-submarine torpedoes to Vietnam amid heightened tensions with China.

Vietnam has steadily built up its military capabilities over the past decade, including a surge in new foreign procurements with applicability in the hotly contested South China Sea. Beijing reacted with irritation to last year’s lifting of the US’ long-held arms embargo against Vietnam. It has not yet responded to reports of the proposed Akash missile system sale.

Defense cooperation has been central to bilateral ties since 2007, when India and Vietnam signed a broad memorandum of understanding on training, exchanges, and visits. In September last year, the two sides elevated ties from a “strategic” to a “comprehensive strategic” partnership, making India one of Vietnam’s top strategic allies. Since 2011, Vietnam has doubled to 15 the number of global strategic partnerships it engages in a bid to diversify its post-Cold War diplomacy.

The pending missile system sale comes to light after earlier talks on Vietnam’s bid to procure the Brahmos short-range supersonic missile system, produced by an Indo-Russian joint venture, stalled without Russia’s agreement. The Brahmos is known to be the world’s fastest anti-ship cruise missile in operation. India and Russia plan to develop a new generation of the missile capable of hitting targets at a 600-kilometer range.

Ties were further enhanced in a 12-point Joint Vision Statement, headlined by a US$500 million line of credit for Vietnam defense procurements from Indian producers, during Modi’s visit to Hanoi in September. That line of credit was boosted fivefold from the US$100 million extended in 2014. Vietnam is a useful and strategic client for India as it looks to increase its weapons exports to US$2 billion in coming years.

Bilateral defense education and training programs are also growing, as witnessed in rising Indian assistance to the Information Technology and Foreign Languages Training Center at the Signal Officers Training School in Nha Trang. The central coast town is near the strategic Cam Ranh naval facility, where Russia maintains residual influence from the Cold War era and the United States is now known to desire special access.

India has agreed to train Vietnamese pilots on Russian-built SU-30s and Sukhoi fighter jets and currently trains Vietnamese submarine operators on Russia-produced Kilo-class submarines. Vietnam purchased six of the vessels from Russia in 2009, the last of which was delivered in 2016. There is also an agreement on the peaceful exploration of space, including over satellites which India will launch from Vietnam to oversee sections of the South China Sea.

As long time clients of Russian arms, India and Vietnam already share a high level of force interoperability. Previously, Vietnam would even send Russian-made parts to India for repairs, as they were done more cheaply there than in Russia. Both nations have also undertaken significant force upgrades in recent years. From 2011 to 2015, Vietnam was the world’s eighth-largest weapons importer, according to a report from Stockholm International Peace Research Institute.

India’s arms sales to Vietnam are part of its ‘Look East’ policy, New Delhi’s pivot-like policy toward Southeast Asia. The Akash missile system sale, if completed, may open the way for greater Indian access to Cam Ranh for purposes of maintenance and training. India is also involved in oil and gas exploration in the South China Sea, including areas that Vietnam claims. An Indian presence at Cam Ranh would be a potential deterrent to China interfering in such exploration operations, analysts say.

Though China obviously factors into Indo-Vietnamese defense cooperation, Hanoi is implementing a wider hedging strategy. India’s Non-Aligned Movement background and growing regional muscle make it a valuable ally outside of US-China competition for influence, as well as the uneasy non-alliance of China and Russia. How China reacts to India’s rising military involvement in the South China Sea, however, is yet to be seen.