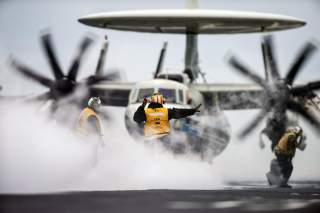 The current excitement and nationalist pride on the part of many Chinese netizens notwithstanding, the fact that the sea trial of the PLA’s second carrier failed to pique too much interest in overseas media is perhaps an indication of how it actually measures up against its counterparts in foreign fleets.

Though the Chinese Defense Ministry has stayed mum on the maiden voyage of the nation’s first domestically built aircraft carrier, photos and video clips have flooded the Internet since Monday, when the vessel was seen being towed out of its berth at the Dalian Shipyard.

The ship is now believed to be en route to designated zones for sea trials in the Yellow Sea and Bohai Sea off northeastern China.

China has apparently expedited the construction of the new warship now that it has come to grips with carrier design and technology inherited from the Soviet Navy, with the purchase and restoration of a rusty, stripped hulk as the People’s Liberation Army Navy’s first carrier, which was christened Liaoning.

The current excitement and nationalist pride on the part of many Chinese netizens notwithstanding, the fact that the sea trial of the PLA’s second carrier failed to pique too much interest in overseas media is perhaps an indication of how it actually measures up against its counterparts in foreign fleets.

Known specifications of the home-built carrier include a displacement of around 65,000 tons and conventional diesel and steam propulsion – similar to the Liaoning, of the Soviet-era Kuznetsov-class – plus a steam-powered catapult aircraft-launching system.

The US now maintains an unrivaled fleet of 11 carriers, all nuclear-powered and each capable of carrying and servicing 70 to 90 aircraft.

China is also facing a talent crunch as construction of its second home-made carrier is rumored to start soon in Shanghai.

On Monday, Chinese news portal Netease carried a commentary that had an objective reflection of the new carrier’s genuine strength.

It argued that both of the aircraft carriers that China has in hand are of the mid-weight range, roughly in the same league as the French Navy’s nuclear-powered, 42,500-ton Charles de Gaulle and the Royal Navy’s gas-and-diesel-propelled, 65,000-ton HMS Queen Elizabeth.

Still, China’s J-15 fighters are a big drag on the Chinese carrier group’s strike capabilities, given the fact that the Queen Elizabeth‘s air wing typically consists of F-35B Lightning fighters.

The indigenous Chinese carrier also looks like a minnow compared with the USS Gerald R Ford, commissioned last July as the epitome of US naval might. The Ford boasts a whopping displacement of 100,000 tons, in the supercarrier category, with two A1B reactors on board with a total output of 280,000 horsepower, 40% more than the steam boilers that propel the new Chinese carrier.

State-of-the-art electromagnetic launch pads are also up and running on the US carrier but the Chinese version of the advanced linear induction motors that catapult aircraft won’t be put into use unless the second home-made carrier is built, which still needs years to take shape.