Why Did Russia Just Build This Gigantic 80 Year Old Tank? 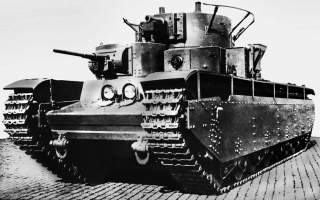 In April 2018, a very large and interesting machine rolled out of a military museum in Verkhnyaya Pyshma, a town in Russia’s Sverdlovsk region. It was a T-35 — one of the most bizarre tanks of the interwar period and known in particular for its five turrets, huge size and short performance on the battlefield.

The Ufa-Holding Museum of Military Equipment constructed a non-moving T-35 for an exhibit and then upgraded it into a working vehicle with a diesel engine, as opposed to the original T-35’s Mikulin M-17 petrol engine. The Red Army manufactured 63 — including two prototypes — of the enormous, multi-turreted tanks between 1933 and 1938, but only one continues to survive to the present day. That one is based at Moscow’s Kubinka Tank Museum, and is operational.

The reproduction in Sverdlovsk is beautiful — and goofy, like a tracked battleship floating over land seen in this video from the Russian Ministry of Defense’s T.V. channel.

The T-35 was the larger cousin of the three-turreted T-28, as both shared many parts. The T-35’s main cannon was a 76-millimeter gun housed in a central turret. Two 45-millimeter guns and two machine guns rested around the main cannon in individual turrets. Of course, this increased the crew size considerably — to 10 crew members including a driver, commander, two crew members each of the three cannon turrets, along with two machine gunners.

The most comprehensive online source for the T-35 is from Francis Pulham at the Tank Encyclopedia, and he describes some of the odd adaptations to make the tank more survivable. One feature that stands out are the lengthy, 10-millimeter-thick armored side skirts riveted into place over the wheels — which were themselves connected in a series of complicated wheel trucks.

The riveted design, instead of a welded one, would likely have been an issue in combat. Imagine the rivets turning into small pieces of flying shrapnel after a hit.

Impressive though it was, the T-28’s thin armor, size and numerous mechanical problems added up to make it an impractical tank for the demands of modern armored warfare. The machines were perhaps more useful as propaganda symbols, as the Red Army loved to show them off in annual military parades.

“They were symbols of the new industrial and military strength that the USSR had gained over the previous decade,” Pulham writes.