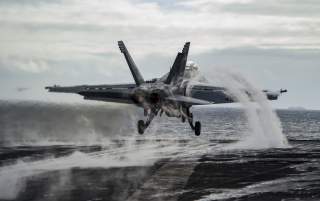 The original Latin phrase by Roman military expert and author Vegetius is “si vis pacem, para bellum” which translates as “if you want peace, prepare for war.” A Roman aphorism.  It is also somewhat poignant as Vegetius was writing in the mid-fifth century A.D. at a time when the Western Roman Empire was collapsing under successive waves of barbarian incursions from the East. Alaric and the Visigoths sacked Rome in 410 A.D. The inability to provide a capable defense not only denied peace to the Romans, but signaled the demise of the Empire in the West and ushered in the Dark Ages.

Modern strategists, defense officials and politicians have often referred to Vegetius’ observation. The popularity of this phrase from an ancient writer has to do with the distinction it makes between pursuing peace and waging war. Through most of human history the assumption was that might made right. This concept was best expressed by Thucydides, an Athenian soldier, historian and required reading by multiple generations of liberal arts majors. In his History the Peloponnesian War, he describes the negotiations between Athens and the non-aligned island of Melos which was being strongly pressured to join the former’s alliance against Sparta. When the Melian leaders protested that Athens’ demands were a violation of what is fair and right, the Athenian negotiators responded simply that “the strong do what they can, and the weak suffer what they must.” The philosophical, legal and strategic implications of what is called the Melian Dialogue have been debated for hundreds of years.

Why should a single line in a relatively obscure work by a largely unknown Roman author find such resonance in modern times? Because it is a reflection of the rise of the Western liberal order and the spread of democratic governance across the world. A fundamental tenet of liberal democracy is that might doesn’t make right, whether in domestic politics or international relations. Aggressive wars are illegal and impermissible. But nations have an inherent right to self-defense. Hence, it is permissible to seek peace by deterring aggression. But to do so, nations must make the costs of war to the aggressor high. The only way democratic nations have found in some three hundred years of achieving deterrence is by being sufficiently strong militarily to make war unattractive. It is no accident that the motto of the Royal Navy is “if you want peace, prepare for war.” The modern equivalent of Vegetius’ phrase is one first employed by President Ronald Reagan: “peace through strength.”

President-elect Trump has been assailed by critics on the left and right regarding his desire for a good relationship with Russia’s Vladimir Putin. The problem with such an idea, the critics argue, is not merely that the Kremlin stands accused of trying to influence the course of the 2016 Presidential elections and weaken an expected Clinton presidency but more broadly that he is, in Senator John McCain’s words “..  a former KGB agent who has plunged his country into tyranny, murdered his political opponents, invaded his neighbors, threatened America’s allies, and attempted to undermine America’s elections.” Mr. Trump has responded in a series of tweets by asserting that “Having a good relationship with Russia is a good thing, not a bad thing” and “When I am President, Russia will respect us far more than they do now.”

How can the incoming President achieve a good relationship with Russia, one in which this country is respected by the Kremlin far more than it is at present? The answer can be found in the words of the ancient Roman. Mr. President-elect Trump, if you want peace with Russia, prepare for war.

In truth, the incoming administration, including the new President, knows this truth full well. On the campaign trail, candidate Trump repeatedly called for rebuilding the U.S. military to the point that it will be so strong that no one will dare to take us on. He called for a 350 ship Navy, a larger Army and Navy and more tactical fighters for the Air Force. Since winning the election, the President-elect has announced his intention to rebuild the U.S. nuclear arsenal and warned that any nation that thinks it can engage in a nuclear arms race should bring it.

But maintaining peace with Russia and having a cooperative relationship with President Putin requires one additional step: deterring potential Russian aggression in Europe. The peace of Europe, paid for with the blood of Americans in two world wars and maintained for than 70 years by the U.S. military as part of the NATO Alliance, was violated by Putin’s Russia with its seizure of the Crimea. Whatever one wants to make of Russian claims to the peninsula, this was the first change in a European border by force in three quarters of a century. Russia has fomented a civil war in eastern Ukraine, sought to undermine the political stability of several European states, deployed a wide array of offensive weapons, including tactical nuclear weapons, to its Western borders and conducted numerous, large-scale military exercises with a decidedly offensive character.

Today, the United States and NATO are ill-prepared and mal-positioned to achieve deterrence of Russian political and military aggression in Europe. Simply put, there are not enough capable military forces currently deployed on the ground in Europe to conduct an effective defense of NATO’s eastern frontier.  Moscow’s investments in anti-access/area denial capabilities have turned the Baltic and Black Seas into Russian lakes and could drive the U.S./NATO air forces from the skies over Eastern Europe. The RAND Corporation published a report recently which recommended deploying a full heavy division plus supporting capabilities in the three Baltic states in order to create a credible defense of those countries. The U.S. Army Europe, in the words of its commander Lieutenant General Ben Hodges, is struggling to make 30,000 soldiers appear like 300,000. As this piece is being written, the U.S. Army is working to return a single armored brigade combat team to the Continent.

The incoming Trump Administration needs to do two things. First, it must announce a near-term program to modernize the U.S. Army. A five-year program focused on accelerating current acquisition programs could have a dramatic impact on the Army’s combat power during the administration’s first term in office. Second, more U.S. forces need to be returned to Europe. The new President should propose a one-for-one matching program. For every new combat formation deployed to Eastern Europe by our NATO allies, the United States will add one to its forward-deployed forces on the Continent.

President-elect Trump’s ambition for a positive relationship with Vladimir Putin is admirable and may even be an attainable goal. But the new President needs to recognize that if he wants peace with Russia, he must prepare for war, specifically in Europe.