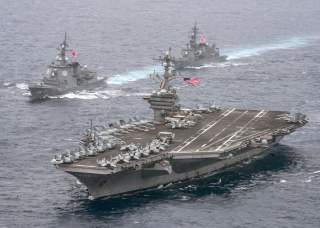 Recently, a senior Vietnamese official asked Chinese foreign minister Wang Yi in Phnom Penh if negotiations with ASEAN on a South China Sea Code of Conduct (COC) would be completed by the end of the year. Mr Wang and his officials laughed it off, a Southeast Asian diplomat told me. A Vietnamese observer said he felt sorry for ASEAN. ‘They are just using the code of conduct to buy time.’

Chinese cynicism about the COC belies apparent progress. In August 2016—a month after the historic Hague ruling on Manila’s case against Beijing—ASEAN and China agreed on a hotline for maritime emergencies and a joint declaration applying the Code of Unplanned Encounters at Sea to the South China Sea. Last month, Mr Wang said a draft COC had been completed. China will host a meeting with ASEAN in May to come up with a preliminary agreement on a COC framework.

It’s important to note that China’s apparent willingness to accelerate talks on the code comes after 15 years trying to turn the 2002 Declaration of the Code of Conduct of Parties in the South China Sea (DOC) into a COC. But even if China and ASEAN agree on a COC, questions will remain over its effectiveness.

First, it’s not certain what geographical area the COC would cover. Neither is it clear if there’d be a punitive element in it. Second, China uses the COC to deflect criticism over its reclamation and militarization of maritime features. The most recent effort to push ahead with the COC came a month after the Hague ruling.

The issue is that China is against the idea of a COC and it believes other claimants have not been adhering to the DOC. Speaking to Singaporean journalists in 2012, then-vice foreign minister Fu Ying charged that there was little point in forging ahead with a COC ’when the DOC is not faithfully observed.’ (no matter that China has ignored the fact that its activities in the South China Sea since 2013 far exceed those of the other claimants). Likewise, Foreign Minister Yang Jiechi said in 2014 that China was open to launching discussions on the COC if there was full compliance with the DOC by all parties.

At best, the COC would only put a brake on China’s extensive reclamation and militarization. No one disputes that ASEAN’s provided much-needed stability and prosperity in the region. But its effectiveness at dealing with ‘hard’ security issues such as the South China Sea, is being challenged. That goes back to 2102 when ASEAN failed to issue a communique on Beijing’s activities in the South China Sea. China was seen to have influenced Cambodia, the ASEAN chair, to stop the release of a statement, underscoring Beijing’s willingness to use friends within ASEAN to achieve its goals.

Indonesia, the putative head of the grouping, appears to have turned inward. Recently, a senior Indonesian official told a group of scholars and businessmen that Jakarta deemed President Donald Trump’s approach to China and the South China Sea to be ‘critical’. But he cautioned that Indonesia would adopt a ‘wait and see’ approach, instead of taking the lead on the disputes. Last month, Indonesian Coordinating Minister for Maritime Affairs Luhut Panjaitan said Indonesia did not envisage joint patrols in the South China Sea with Australia.

Singapore, which has taken an even-handed approach to the South China Sea disputes, stressing the need to comply with international law, came under pressure from China which held nine Singaporean infantry combat vehicles in Hong Kong last year. No wonder, attention has turned to the Trump administration which expressed support for allies such as Japan and South Korea, the adoption of a harder approach towards China and a plan to build up the US Navy.

But by killing the Trans-Pacific Partnership (TPP), Trump has kicked out a key pillar of America’s presence in the Asia-Pacific. Lastly, there seems to be little or no policy innovation when it comes to pushing back China in the South China Sea. If the Obama administration suffered from paralysis from analysis—over-thinking Chinese responses to US actions in the South China Sea—the Trump administration’s paralysis stems from a lack of analysis. Hundreds of positions in the State Department and Pentagon remain unstaffed.

Washington needs to establish a red line at Scarborough Shoal which China seized from the Philippines in 2012. It was reported last month that China will begin work on an environment monitoring station there. The fear is that China will start dredging, followed by militarization, thus creating a strategic triangle connecting Woody Island, the Spratlys chain and Scarborough Shoal that would dominate most of the South China Sea.

Four years of talk about international law and the need for a rules-based regional order has not stopped Beijing’s building projects there. Earlier this month, it was Trump who enforced Barack Obama’s 2012 red line in Syria, by launching cruise missile attacks at a Syrian airfield which had carried out a chemical gas attack. Given China’s show of strength in the South China Sea, it’s time for Donald Trump to declare of Scarborough Shoal: ‘You shall not pass.'