Why Finland and Sweden Should Not Join NATO 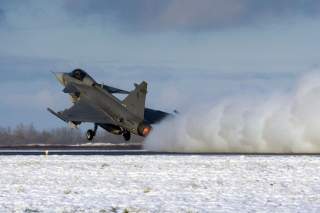 “All the long years of my reign, my colleagues, the monarchs of Europe, have paid no attention to what I have to say. Soon with my great Navy to endorse my words, they will be more respectful.” It would be wise to reflect on these words spoken by Kaiser Wilhelm II on the eve of the First World War—especially as the centennial of the outbreak of that war approaches. During his reign, the Kaiser felt underappreciated and scorned.

This gave the Kaiser all the more reason to launch his war—a war that would bring him respect by the sword. Individuals matter in history and there is no individual more important to Russia today than its president, Vladimir Putin. Although the comparison with the Kaiser is certainly not perfect, Vladimir Putin does feel underappreciated and scorned by the West, like the Kaiser. The worst thing the West can do is add fuel to Putin’s fire and give him a reason to demand respect by coercive means.

Specifically, this means that Finland and Sweden should not join the North Atlantic Treaty Organization (NATO). Finland and Sweden are already part of NATO in all but name. They conduct military exercises with NATO and allow their troops to be part of NATO’s rapid-reaction force. Both deployed soldiers to Afghanistan and Sweden assisted in the air campaign during the 2011 Libyan War. Although joining NATO would allow Sweden and Finland to engage in the organization’s decision-making process, the benefits of such a move would largely be minimal.

The costs, on the other hand, would be huge—just as were the costs of the West’s blind embrace of Ukraine before the Maidan Revolution. Sergei Markov, a high-level advisor to Putin, has been quoted as saying that an enlargement of NATO to include Finland and Sweden could trigger World War III: “anti-semitism started World War II, Russophobia could start the third.” The West has nothing to gain by making Sweden and Finland officially part of NATO when the alliance already benefits from military coordination with these countries. What is worse is that the Kremlin knows this and will see such a move as antagonistic. If the West wants results from its foreign policy—and specific results like the cooling of tensions between Russia and the United States or stabilization in Ukraine—then it should note that military posturing by enlarging NATO to Finland and Sweden will not bring it any closer to these desired outcomes.

To be sure, the West should make it clear to Finland and Sweden that it is not ignoring their security concerns by leaving them out of the alliance. But the Finns and the Swedes do not need Article 5 of the NATO charter to be convinced of Western support in the case of a Russian invasion or attack because such a move would be so outrageous that the EU would be forced to respond. In fact, the 2007 Lisbon Treaty among EU countries states that in the event of “armed aggression” against a member state, “the other member states shall have towards it an obligation of aid and assistance by all means in their power”—and if the EU gets involved, so too will America in some way or another.

Even more telling, the people of Sweden and Finland do not want to join the NATO alliance. Polls conducted during the March 2014 Crimean crisis showed that only 22 percent of Finns supported joining NATO. Likewise, in a March 2014 survey, 31 percent of Swedes approved membership while 50 percent opposed the move. In Finland’s case, no political party actually supports membership in NATO even though the sitting president, Sauli Niinistö, has indicated his personal support. Most Finns, including former Presidents Tarja Halonen and Mauno Koivisto, have opposed joining NATO precisely because they feel Russia has no design on their countries. Indeed, Finns and Swedes do not share the sort of ethnic ties to Russia that Ukraine and other former Soviet socialist republics have, which would heighten Russia’s interest in them.

Put differently, Putin has no interest in antagonizing Finland or Sweden because relations with both countries need to be strong for Russia’s economic growth. Sweden and Finland for their part can work to strengthen military ties with each other—as they already are doing—so that they are capable of working together to cope with shared security risks. The more independent they are from NATO, the more Russia will take them seriously and not see them as part of some larger Western plan to contain Russia.

One hundred years ago, the Kaiser called Western alliances—culminating in the Entente—a form of “Einkreisung” or encirclement. Let’s not allow Vladimir Putin to say the same thing today.