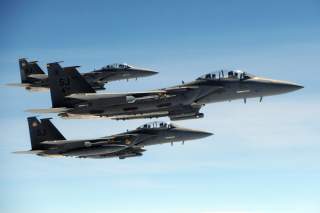 A senior North Korean diplomat has suggested that Pyongyang might conduct a hydrogen bomb test in the Pacific—the first atmospheric nuclear blast since China’s October 16,1980, detonation.

"It could be the most powerful detonation of an H-bomb in the Pacific," North Korean foreign minister Ri Yong-ho told reporters according to South Korea’s Yonhap news agency.

"We have no idea about what actions could be taken as it will be ordered by leader Kim Jong-un."

While its is not certain how such events might unfold, or even if North Korea will conduct such a trial, it is possible that Pyongyang would opt for an end-to-end test of a ballistic missile tipped with a nuclear warhead.

Earlier this month, Jeffrey Lewis, Director of the East Asia Nonproliferation Program at the James Martin Center for Nonproliferation Studies at the Middlebury Institute of International Studies at Monterey, told The National Interest that believes that North Korea could very well conduct such a test—something he has dubbed Juche Bird.

Lewis named the hypothetical North Korean test as such because of an earlier American end-to-end test of a nuclear-tipped Polaris submarine launched ballistic missile called Frigate Bird on May 6, 1962. Part of Operation Dominic— the Frigate Bird test involved USS Ethan Allen (SSBN-608) launching a Polaris A1 ballistic missile that flew roughly 1500m before culminating in a 600KT airburst at 11,000ft over Christmas Island.

The North Koreans might take such an action because many in the United States senior leadership continue to doubt that Pyongyang has such a weapon available for operational use—and that Washington will never accept North Korea as a nuclear state.

Moreover, Washington has ratcheted up its use of bellicose language—with President Donald Trump threatening to “totally destroy North Korea” earlier this week. Pyongyang—if it feels backed into a corner—might conduct such a live-fire test, putting the world into uncharted territory.

“Yes, if we push them hard enough,” Lewis told The National Interest earlier this month.

When China started to develop its nuclear capabilities with Soviet assistance, Washington was dismissive of Beijing’s technological progress—just as many dismiss Pyongyang’s potential capabilities. Indeed, many of the proclamations emanating from Washington from those years are similar to today’s rhetoric.

If the North Koreans conduct an end-to-end live shot of a nuclear-tipped Hwasong-14 intercontinental or Hwasong -12 intermediate range ballistic missile, it would like have to aim for the vast reaches South Pacific. However, even then, there is not much room for error since merchant ships crowd the waterways even in vast emptiness of the Pacific. Destroying neutral or allied merchant shipping during a nuclear test would dangerously ratchet-up tensions and could tip the scales towards open conflict. (Though one way around that is to detonate the weapon in high in the air or in space as the Soviets did February 2, 1956)

A war—if it breaks out—would likely be disastrous on an epic scale for all of the parties involved.