Why India Is Still Hedging Its Bets on US 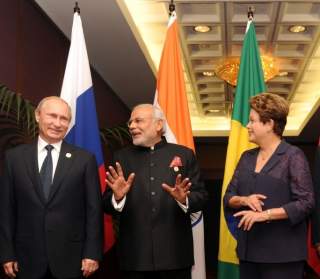 Obama’s official state visit to India this week is unique due to the U.S. president’s place as “chief guest” during Delhi’s Republic Day celebrations, a role never previously bestowed on an American president. The visit comes on the coattails of several highly publicized, official state visits from China and Russia, both shortly before and after Prime Minister Modi’s visit to the U.S. in late 2014.

Many Indians are likely to view Mr. Obama’s presence at the Indian Republic Day celebration as a sign of India’s increased global importance and influence. Still, challenges—on both sides—threaten the sunny relationship. There is a pressing need to share both the benefits and risks bi-directionally across a number of areas, including foreign direct investments; technology co-creation; security and defense trade and cooperation; and energy and environment matters. If the U.S. can wrap its head around the fact that India will be India, inevitably trading with Russia and China and not always agreeing or siding with the U.S., then there is some hope for a positive set of outcomes this week. Likewise, India has challenges as well, with the need to manage liability, create more transparent procurement processes, and understand that Buy American can conditionally work with Make in India. Moreover, both countries need to come to terms with policies vis-à-vis Pakistan that can actually enable South Asia to be stable and peaceful.

What will be on the agenda this week has been largely kept under wraps, fueling cross-border, Indian-Pakistani media antagonism. The tit-for-tat media volley has New Delhi claiming that inside sources in Washington told Islamabad to clamp down on cross-border terrorism during Obama’s visit. Islamabad has dismissed these allegations as propaganda. If the allegations are true, they would be tacit confirmation that India faces an unwieldy “Pakistan problem” in which Washington would not likely interfere either before or after the U.S. visit. Moreover, Indian perceptions that the America’s lack of condemnation through actions—such as using aid as a bargaining tool—only adds insult to injury to those worried about the alleged condition for Obama’s visit. Secretary of State John Kerry’s most recent visit to Pakistan, where he offered $250 million in emergency aid, did not go unnoticed  in New Delhi.

Russian President Vladimir Putin’s December 2014 visit to Delhi for the 15th India-Russia annual summit resulted in an hundred billion dollar bonanza, with Modi and Putin inking significant nuclear, oil, and defense deals. The more subtle yet most significant outcome of last year’s summit, however, was Russia agreeing to further jointly developed defense capabilities with India and to allow Delhi to harness Modi’s “Make in India” initiative. And in a well-timed visit just days before Obama’s arrival, Russian Defense Minister Sergei Shoigu met with his counterpart Mannohar Parrikar and Prime Minister Modi, reinforcing the "time-tested special and privileged" strategic partnership between India and Russia. While in Delhi, Shoigu visited the Russian-Indian joint venture, BrahMos Aerospace Limited, which makes supersonic cruise missiles. In addition, Shoigu reportedly discussed jointly developing a new-generation of missiles that would be smaller and compatible with the fifth-generation fighter, the MiG-29K, the Su-30MKI, and Indian submarines.

This visit prompted Parrikar to say that India will be “fast-tracking” many of the issues related to the joint Russian-Indian stealth fighter jet project. The visit also reinvigorated talk about building 400 Russian helicopters in India annually. Overall, the purpose of Shoigu’s trip seemed to be about marking Russia’s manufacturing territory in advance of Obama’s visit.

For the most part, Washington appears to be choosing its battles with India wisely, and not remonstrating Delhi too much for its choice of “partners” or for not enacting sanctions against Russia in the aftermath of the Crimean annexation and continued conflict in Ukraine.

India has loudly acknowledged that Russia is its foremost defense partner amidst a growing list of foreign nations courting it. And, despite the U.S. taking the lead in defense sales to India last year, Washington’s reluctance to share custody of joint defense innovations makes it easier to understand Delhi’s continued ties to Moscow.

As Russia’s economic situation deteriorates, however, there is little indication that India will forego its old ally in favor of strengthening its ties with the U.S. This will not be a zero sum game for the U.S., and the focus will need to remain on how the U.S. and India can work bilaterally, independent of other variables. India can afford to pursue stronger ties with America despite preexisting ones with Russia; with that in mind, there is an opportunity for the Delhi and Washington to sign a new defense framework agreement.

Questions remain regarding how the Indian bureaucracy can engage the U.S. for joint development and production of various military hardware (around 17 projects are under discussion) in light of the ‘Make in India’ campaign. It is possible that the Pentagon will provide approval for the co-production of at least two projects; Indian rumors abound over at least two specific projects to be finalized with a price tag of around $20 million.  Concerns about cost and global supply chains, corruption, skilled manufacturing labor, labor availability and labor laws are still a vital part of the U.S. reluctance to fully advance co-production and Make in India. Joint production of combat and non-combat UAVs is an expected first step, although the U.S. is keenly aware of what its export restrictions are likely to mean for Indian’s security and defense needs. Also, some facility could be created for the joint production of equipment required for transport planes like the C-130.

Presently, the onus is on both the states to ensure that their bilateral relationship reaches new heights, not just in the security field, but also in technology and economics as well (the nuclear agreement announced just after President Obama landed is a good start). The burgeoning U.S.-India relationship will require actions—not just pomp, platitudes, or recapitulations of previous agreements/promises.

Melissa S. Hersh is a Washington, D.C.-based risk analyst and consultant and Truman National Security Fellow. Dr Ajey Lele is a Research Fellow at the Institute for Defence Studies and Analysis, New Delhi. The views expressed are their own.