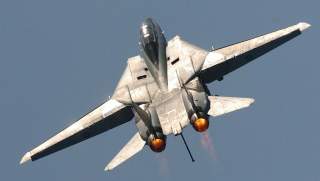 One of the ironies of the bitter relations between the Iran and the United States today is that half a century ago they were the closest of allies. The repressive, secular government of the shah had come to power thanks to a CIA-orchestrated coup, and was lavished with then latest American weaponry, including F-14 Tomcat fighters, AH-Cobra attack helicopters and TOW antitank missiles.

So when the CIA asked Iran if it could conduct aerial spying flights into the Soviet Union, the response was “How many bases will you need?” and “Can our pilots ride backseat?” and, even, “Can we buy spy planes from you to help out?”

That the Soviet Union did not take kindly to the U.S.-Iranian intrusion is to put it lightly. Soviet fighters lobbed missiles and spat cannon fire at the Iranian aircraft, and when that didn’t work, they even rammed one of the U.S.-Iranian recon jets.

The main purpose of “Operation Dark Gene” was to find and exploit gaps in the Soviet Union’s air-defense radar network along the Iranian border—and also to test just how those defense worked when alerted. In 1968, twelve RF-FA Tigereye reconnaissance variants of the F-5 Freedom Fighter were delivered to the Imperial Iranian Air Force. Piloted by U.S. Air Force pilots, these conducted regular spy flights across the border. Then, in 1971, Iran acquired two dozen faster and heavier RF-4C Phantom recon jets with special modifications for listening in to Soviet communications. The two-seaters would typically fly on spy missions twice a month with a mixed crew of American and Iranian personnel, the latter there for training purposes.

The American and Iranian pilots didn’t always get out of Soviet air space cleanly. Two RF-5As and two RF-4Cs were allegedly shot down during the 1970s, with the ejected pilots innocently claiming they were engaged in training flights.

The most dramatic—and only fully documented—encounter occurred on November 28, 1973 when an RF-4C piloted by Maj. Mohamed Shokouhnia with U.S. Air Force Col. John Saunders in the backseat was intercepted at supersonic speeds by a Thirty-Fourth Air Army MiG-21, piloted by Capt. Gennady Eliseev and dispatched from a base in Vaziani, Georgia. The Soviet pilot fired off both of his R-3S (NATO codename AA-2 Aphid) heat-seeking missiles at the recon jet, which evaded while expending dozens of flares. The R-3S was a Soviet clone of the American AIM-9 Sidewinder missile—the Soviets reverse-engineered one recovered from the hull of a lucky Chinese fighter plane after an air battle off of Taiwan!—and the early versions of the Sidewinder were not renowned for their reliability. The R-3S’s seeker required twenty-two seconds to lock on, and the minimum engagement range was under one kilometer.

Eliseev then tried to engage the Phantom with his twenty-three-millimeter cannon, but it jammed when he pressed the trigger. His ground controller told him attempt a ramming attack, which Eliseev agreed to. Soviet pilots had widely employed ramming tactics in World War II—given the superior training and inferior numbers of the German aircraft, a one-for-one trade-off was seen as advantageous, though it asked quite a lot of the pilots.

The RF-4’s evasive maneuvers had caused it to lose speed relative to Eliseev, so the Soviet pilot hit the throttle and smashed his smaller fighter into the tail of an aircraft more than twice its weight. Eliseev’s last message was a triumphant “I got him!”

Saunders and Shokouhnia successfully ejected from their Phantom and were captured by Soviet ground troops. Eliseev did not survive. He was posthumously decorated as a Hero of the Soviet Union and is remembered with a memorial in the city of Volgograd (formerly Stalingrad). The maintenance and weapons crews responsible for his plane, on the other hand, were jailed for several years as punishment.

Officially, the United States had agreed to discontinue spy flights back in the 1960s. The protocol for surviving American and Iranian flight crew was to claim they had simply gotten lost while conducting a joint training exercise. The Soviet Union agreed to overlook the incident and return the prisoners—and handed back the pilots (who also received medals), in return for data recovered from a Soviet spy satellite which had crashed in Iran. Three years later, a second RF-4 was reportedly shot down, though little information is available on this incident. The Soviet Union eventually responded by sending its own Mach 3 MiG-25RBSh reconnaissance jets into Iranian airspace, and some claim that Iranian Phantoms managed to hit one of the speedy planes, causing it to crash on the Soviet side of the border.

Ironically, the spy program may have resulted in Iranian pilots losing their lives who were genuinely on training missions. On June 21, 1978, four bulky Ch-47 Chinook heavy transport helicopters of the Iranian air force strayed twelve miles over the border of present-day Turkmenistan on a training mission. Two MiG-23M fighters of the 152nd Fighter Regiment were scrambled, and the second was ordered to fire. Pilot Valery Shkinder launched two R-60 (AA-8) infrared-guided missiles, both hitting one of the ponderous twin-rotor helicopters. He fired his twenty-three-millimeter cannon at a second Chinook, knocking out one of its two engines. The two remaining choppers escaped.

There were no survivors amongst the crew of eight on the first CH-47, but the second made a forced landing close to Ashgabat and its crew of four was captured. However, both Iran and the Soviet Union wished to avoid a diplomatic incident, so the Chinook and its crew were returned shortly afterwards, and Shkinder was denied a medal for the incident.

Iranian air power had been used against drug smugglers and insurgents along its border with Afghanistan, and it is possible the Iranian helicopters were engaged in one such a patrol when they crossed the border by accident. Two MiG-23MLDs were scrambled out of Shindand Air Base, fifty miles away. Wheeling around from the west, the Soviet pilots each launched an R-24R radar-guided missile from a distance of five miles at the helicopters, which promptly vanished from their radars. Two weeks later, Soviet troops found the remains of the two downed helicopters.

Unlike the Soviet Union, Russia does not have any land borders with Iran, though it can and does conduct trade directly via the Caspian Sea. The two nations are now cooperating to prop up the regime of Bashar al-Assad in the Syrian Civil War, though their objectives in that war-ravaged country are not entirely in sync. At one point Moscow even bragged that Tu-22M Backfire bombers were flying air strikes in Syria from Iranian airbases.

The new Trump administration simultaneously desires warmer relations with Moscow while questioning the nuclear deal with Tehran, which could complicate relations between all three countries. For now, though, Iranian pilots no longer have cause to fear Moscow’s jets, particularly as they are flying some of their own—alongside a large fleet of aging American aircraft acquired when the two countries were partners in espionage.