Why Iran's New Stealth Fighter Might Be the Ultimate Paper Tiger 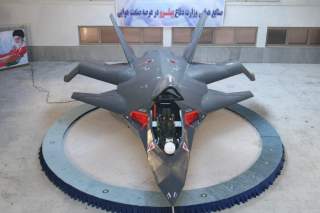 Iran’s indigenous Qaher F-313 fifth-generation stealth fighter is allegedly about to enter serial production, according to a top Iranian military official. However, the reality is that the Qaher F-313—which was widely derided as a hoax when it was first rolled-out in 2013—is likely nothing more than an ill-conceived propaganda ploy.

“[Iranian Defense Minister Brigadier] General [Hossein] Dehqan underlined that the final stage of the production of the home-made Qaher 313 fighter jet has ended, adding that the plane is ready for different tests,” writes the semi-official Fars News agency. “Qaher is a logistic aircraft for short distances and is a light fighter jet used for military and training operations. Some military analysts have stated that Qaher is a fifth generation aircraft.”

It’s not clear which analysts have stated that the Qaher is fifth-generation fighter, but the overwhelming majority of Western analysts treated the F-313 as a joke when it was unveiled. Indeed, as I stated at the time: “Perhaps, this is just me as a product of the 1980s, but this aircraft looks a lot like an old GI Joe toy.”

I stand by that statement as even a cursory examination of the many photos and video imagery of the aircraft with a purportedly ‘very small radar cross section,’ it was immediately apparent that this was not a serious development. At the very best, it was  a subscale test-bed—but that’s being generous. The “aircraft”—such as it was—was clearly a paper-machete mockup.

Perhaps the most immediate give away was the miniscule size of the aircraft. There didn’t appear to be room for avionics and fuel—let alone weapons. Moreover, it’s doubtful that there was an engine installed given the lack of a nozzle and the two tiny air inlets.

The other problem for Iran would have been to find an engine small enough to fit into such a miniscule airframe. Tehran’s options seem limited to something like the General Electric J85—which Iran has previously reverse engineered—but without a nozzle the heat would have likely set this mock-up ablaze. Even with a nozzle, the airworthiness of the F-313 would be dubious at best—it would likely have some serious stability issues.

Additionally, the cockpit appeared to be too small in relation to the pilot. And the visibility through the material could only be described as horrendous. The cockpit instruments were amongst the only items in the Qaher F-313 that could be described as real. The Iranians were using instrumentation developed for the home-build aircraft market with hardware sourced from Dynon and Garmin.

Furthermore, there were no access panels or weapons bays that were visible. Features such as access panels are found on every aircraft for routine maintenance. In the case of a stealth aircraft, internal weapons bays are necessary in order maintain the jet’s low observable signature while carrying armaments.

As one engineer familiar with low observables design astutely pointed out at the time, while superficially resembling what one might imagine a stealth aircraft to look like, the Iranian machine had serious radar cross section (RCS) problems.

The only logical conclusion is that the F-313 was and continues to remain a farce—an ill-conceived and transparent propaganda ploy that’s fooling no one.