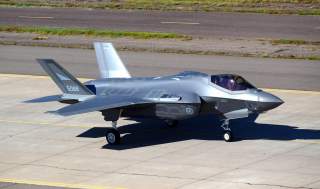 In a move likely to upset Israel, the Trump administration is considering selling the F-35 Joint Strike Fighter to America’s allies in the Persian Gulf.

The move was confirmed by U.S. Air Force Vice Chief of Staff Stephen Wilson ahead of the Dubai Airshow on November 12–16. Speaking to reporters during a roundtable, Wilson said: “Specifically with the F-35, you look at all of our partner nations now and as we look at their requirements. Here in the Gulf, they share many of the same adversaries and many of the same challenges, so discussions are ongoing now with the administration on partner nations that may require them.” According to Defense News, which first reported the news earlier this month, Wilson identified the United Arab Emirates as one Gulf country the United States is currently in discussions with regarding the F-35.

The deputy commander of the UAE’s air force, Brig. Gen. Rashed M. Al Shamsi, seemed to confirm the news when he said at the Dubai Airshow that “equipping the air force requires connected multirole platforms with the ability to share data, enhanced intelligence collection and distribution of the capabilities, a responsive and persistent C4ISR, and a timely and reactive dynamic targeting process.” In case there was any doubt what plane he was referring to, Shamsi added: “We in the UAE already live in a fifth generation environment, So acquiring the F-35 fighter jet is only a step forward to cope with the fifth generation mind-set.”

The United Arab Emirates is reportedly interested in procuring twenty-four F-35s and American officials are believed to be preparing a classified briefing for UAE officials about the plane. Ellen Lord, U.S. undersecretary of defense for acquisition, technology, and logistics, seemed to confirm that a classified briefing was in the works when she told Aviation Week that the two sides are trying to work our procedures to protect sensitive information. Other officials who asked not to be identified told Defense News that Saudi Arabia is also interested in buying F-35s from the United States.

These discussions are only in their infancy and America’s willingness to sell the fifth-generation aircraft to either country is no sure thing. Nonetheless, the Trump administration’s willingness to consider doing so marks a stark departure from its predecessor. The UAE had been inquiring about the F-35 for years but the Obama administration repeatedly shot them down.

When asked in 2016 whether America would consider selling the F-35 to Gulf nations, then-Deputy Secretary of Defense Robert Work stated, “We do not have any expectation for selling the F-35 in the near term, beyond the countries that have already bought into the program.” Similarly, in a letter to a pro-Israel Congress member in 2015, President Barack Obama wrote, “Indeed, Israel is the only nation in the Middle East to which the United States has sold this fifth-generation aircraft.” And, while trying to sell the Iran nuclear deal to Congress, Secretary of State John Kerry also pointed to the fact that Israel would be the only regional operator of the F-35 to ease lawmakers concerns about the Jewish state losing its qualitative military edge.

Unidentified sources told Defense News that they did not believe Israel would object to America selling the UAE F-35s as long as Washington did not sell them to other Gulf nations. That would go against Israel’s public stance, however. After Bob Work's comments last year, Maj. Gen. Yair Golan, the Israeli Defense Forces (IDF) deputy chief of staff, said: "We've known that U.S. policy is not to provide F-35 to other countries in the region for many years into the future, but it's nice to hear this expressed publicly and explicitly." The year before, when asked how long Israel expected to be the sole Middle East operator of the fifth-generation aircraft, another Israeli official, Maj. Gen. Amos Gilad, responded: "forever."

It’s unclear what is motivating the Trump administration to reconsider America’s position against selling the F-35 to any country in the Middle East besides Israel. President Trump has been very vocal about trying to push back against Iranian influence in the region and part of that effort has been trying to strengthen the defenses of Iran’s Gulf neighbors. The sale of the F-35 could be part of that larger campaign. President Trump and his son-in-law, Jared Kushner, have also invested significantly in trying to strengthen relations with Saudi Arabia after they frayed during the Obama years. Saudi Arabia was the first country Trump visited after taking office, and the president has routinely backed controversial Saudi policies such as its campaign to isolate Qatar. Trump has also repeatedly touted increasing U.S. arms sales as a way to create new jobs at home. This too could be a reason the administration is considering selling F-35 to Gulf allies.

Of course, any decision to sell the F-35 to the UAE, Saudi Arabia, or any other Arab ally would ultimately have to be approved by Congress. And, if Israel is indeed against these sales, it would likely be able to generate enough opposition on Capitol Hill to scuttle the deal. Then again, Israel and its allies in Congress have lost similar battles in the past. Most notably, the sale of Airborne Warning and Control System surveillance planes to Saudi Arabia during the Reagan administration.