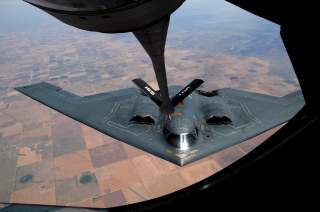 If worse comes to worse and the White House’s campaign of economic and diplomatic pressure fails to denuclearize the Korean peninsula, President Donald Trump might have to live up to his promise of meeting North Korea with “a fire, fury and frankly power, the likes of which this world has never seen before.”

If the President chooses to launch a nuclear first strike on North Korea, there is no certainty even then that the United States will be able to eliminate Pyongyang’s nuclear forces before they can launch a retaliatory second strike. But a disarming first strike—or even a disarming conventional attack—might be the only option for the Washington if Trump chooses to pursue war instead of deterrence.

A conventional strike using massed numbers of cruise missiles could eliminate many of Pyongyang’s fixed nuclear facilities—assuming U.S. intelligence is able to determine where those sites are—but a more difficult problem is presented by North Korea’s elusive mobile launchers and super-hardened deeply buried facilities. While a bomber like the Northrop Grumman B-2A Spirit can carry a pair of conventional 30,000lbs GBU-57 Massive Ordnance Penetrator bombs, even those enormous weapons might not be enough to destroy the most deeply buried and hardened targets inside North Korea.

The GBU-57 is thought to be able to punch through 200ft of reinforced concrete, but the actual numbers are classified and there are many analysts who believe that the publicly available figures are very optimistic. Moreover, it is entirely possible that North Korea has facilities that are buried deeper than 200ft. The problem is further compounded by the fact that the United States only built 20 GBU-57 bombs—and North Korea likely has many more facilities than that.

That leaves the nuclear option for any attempt at eliminating North Korea’s nuclear facilities. The United States has a vast nuclear arsenal, but most of those weapons were designed to fight the Soviet Union during a hypothetical World War III. Given the location of the Korean peninsula, Minuteman III intercontinental ballistic missiles would likely not be useful because those weapon would have to fly on trajectories overflying Russia and China  to reach their targets. That could potentially set off a much larger and much more dangerous nuclear confrontation with those states.

Submarine launched ballistic missile launches from the Pacific would also likely make China very uneasy because of Beijing’s proximity to North Korea. Would Beijing trust that those incoming SLBMs are not heading for its territory? That leaves the B-2 as the most obvious choice to deliver a nuclear payload to North Korea. The B-2 would have to penetrate into Pyongyang’s airspace, locate its targets and deliver B61 thermonuclear bombs onto those North Korean nuclear targets. But even nuclear weapons are of limited use against deeply buried targets.

“Even nuclear weapons have limited effectiveness at destroying the deepest or widely separated underground bunkers,” reads a 2005 report from the Union of Concerned Scientists. “For example, an earth penetrating weapon using the 1.2 megaton B83 warhead—the highest yield weapon in the U.S. nuclear stockpile—could crush underground bunkers to a depth of about 1000 feet. Deeper bunkers can be constructed with modern tunneling equipment, and are essentially invulnerable to nuclear attack.”

But even if the United States managed to destroy North Korea’s fixed nuclear sites, the problem of hunting down Pyongyang’s mobile launchers remains. As Operation Desert Storm showed, locating and destroying mobile ballistic missile launchers is very difficult and time consuming even over flat empty desert terrain. It is neigh impossible in North Korea’s extremely rugged and mountainous terrain. Thus, North Korea might be able to launch a retaliatory strike even after an American nuclear strike since it will be extraordinarily difficult to track down and destroy those launchers. Even a single surviving nuclear-armed missile could wreak havoc.

But launching a preemptive strike would have other consequences—America would be an international pariah thereafter. The alliances with Japan and South Korea would likely be broken and Washington would earn the permanent ire of both China and Russia. Moreover, America’s place as the leader of the free world would be a thing of the past, as most civilized nations would shun Washington.

Thus deterrence is a far better course of action.