Why More MAD But No MAS? 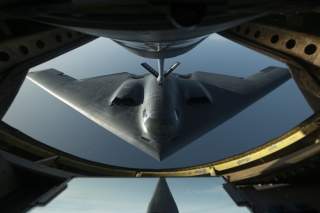 Dan Goure is correct that we should have a more serious strategic defense system but his approach is on the one hand too modest and on the other potentially destabilizing.  Our nuclear security concepts are trapped in an outmoded and dangerous time warp.  Essentially, we continue to believe, as Winston Churchill told the British House of Commons in 1955, that “by a process of sublime irony (we) have reached a state…where safety will be the sturdy child of terror, and survival the twin brother of annihilation“.  This belief has roots in both the emotional trauma of the surprise attack on Pearl Harbor and the pitiless rationality of deterrence theory.  A nuclear Pearl Harbor would destroy the United States and needed to be avoided at all costs.  But there was no defense against nuclear missiles.  We were forced, therefore, to elaborate a strategy that ensured there would be no nuclear Pearl Harbor by convincing any potential adversaries (first and foremost, the Soviet Union) that we would be able to destroy them even if they attacked us first.  This strategy, which became known as Mutually Assured Destruction, or MAD, provided the intellectual framework for our strategic weapons programs throughout the Cold War.  It continues to do so today, twenty-five years after the end of the Cold War.

The U.S. nuclear weapons stockpile peaked at 31,255 in 1967, an astonishingly high number, as Kaplan says, even though many were tactical rather than strategic weapons.  The 1991 START treaty between the U.S. and the Soviet Union limited each side to 1600 strategic delivery vehicles and no more than 6000 attributed warheads within seven years of ratification.  Under the New START Treaty (2010), U.S. strategic nuclear forces decreased this year to 741 delivery vehicles with 1481 deployed strategic warheads and well over 2000 held in storage.  (Russia has somewhat fewer delivery vehicles, but somewhat more bombs and warheads.)  The Treaty provides for the number of deployed warheads to be reduced to 1550 on 700 delivery vehicles by (actually the number of warheads will be higher, perhaps as high as 1850, since under the terms of the Treaty bombers may carry multiple cruise missiles or bombs, which nevertheless count as “one”).  In order to obtain Senate agreement to New START, President Obama agreed to modernization of each leg of the U.S. nuclear delivery triad (land and sea based missiles, and bombers).  Cost estimates for this modernization start at upwards of $300 billion for ten years and reach $1 trillion over thirty years.

The purpose of this modernization is to ensure for generations to come that the U.S. remains able to deter a nuclear attack by maintaining the capability to destroy the attacker.  It is more MAD.  Presidents as divergent in most ways as Ronald Reagan and Barak Obama have recognized its necessity as well as its dangers.  In his 1985 inaugural address, Reagan said: “We seek the total elimination one day of nuclear weapons from the face of the Earth.”  At their first summit meeting, President Reagan and Soviet General Secretary Mikhail Gorbachev agreed that “a nuclear war cannot be won and must not be fought”.  During their 1986 Reykjavik summit, the two leaders, to the shock and perhaps dismay of their staffs, came close to agreement on the elimination of all nuclear weapons, falling short over the issue of how the development of defensive systems might proceed.  In 2009, several months after his inauguration, President Obama, during a speech in Prague, addressed the issue of nuclear weapons by saying “I state clearly and with conviction America’s commitment to seek the peace and security of a world without nuclear weapons.”  At the end of his second term, Obama supports the nuclear weapons modernization program outlined above.

Unfortunately, we cannot be flies on the wall to hear the unvarnished and highly classified intelligence briefings that new U.S. Presidents undoubtedly get on what the consequences to their country would be of a nuclear war.  They must be sobering indeed to leaders who have just taken a solemn pledge to protect and defend their country.  It is perhaps no accident that shortly thereafter Presidents Reagan and Obama committed to the eventual elimination of all nuclear weapons.  Perhaps a sense of what they heard can be gleaned from a Secret (now declassified) 1990 memorandum to President Bush.

We may reasonably presume that this was not a casual, ill-considered statement.  The memorandum was sent by National Security Advisor Brent Scowcroft to the President, on the recommendation of then National Security Council aide (and later Secretary of State) Condoleeza Rice, with the approval of then CIA Director (and later Secretary of Defense) Bob Gates, the Department of Defense and the arms control community.

The fact that the most recent nuclear arms reduction treaty will leave the U.S. with 700 delivery systems and 1550-1850 bombs and warheads (and Russia with a comparable number) demonstrates how far we remain from reducing to a number that, if deterrence fails, would allow the continuation of life as we know it. (Despite the fact that most nuclear weapons currently in states’ arsenals have a yield of less than one megaton.)  It also demonstrates that it is all but impossible to reach that number based on current strategic concepts.  The simple fact is that the possibilities and incentives for cheating rise rapidly as nuclear arsenals are reduced to survivability levels.  When nuclear arsenals comprise 700 delivery systems and 1550 weapons, hiding 25 delivery systems and 50 weapons may be possible, but it conveys no strategic advantage.  As delivery systems decrease to 100 or fewer, hiding the same number carries enormous strategic advantage—the capability of delivering 50% or more damage than the other side can.  Since one is forced to consider both the incentives for the other side to cheat and the advantages of doing so, in a MAD strategic system there is a lower limit for reductions in either weapons or delivery systems.  While that limit has not yet been reached, it is probably well above zero and may approach or exceed the 100 nuclear bursts that would destroy life as we know it.

This is the reality that generates the gap between Presidents’ hopes that the world may someday be free of nuclear weapons and their approval of extremely costly programs to maintain and modernize their country’s nuclear delivery systems.  MAD provides no path to either a nuclear free world or, if deterrence fails, to the survivability of life as we know it.  And while MAD appears to have provided a level of strategic stability thus far, there have been several points at which it could have failed, with catastrophic consequences.

There is a more promising alternative, although an enormously difficult one to achieve.  It requires a thorough reconceptualization of how we think about nuclear security and would entail an unprecedented level of cooperation among at least the major nuclear powers, as well as a substantial commitment of resources.  I think of it as Mutually Assured Security (MAS).

The conceptual trap we are in is thinking that offensive weapons systems, which have dominated militarily since World War II, will inevitably remain dominant.  The history of human warfare demonstrates that offensive and defensive systems have each had their eras of dominance on the battlefield.  Its wall enabled Constantinople to survive for generations after its military had lost the ability to impose its will on others.  Pikemen and crossbowmen proved able to thwart the charge of armored horsemen.  Walled medieval cities were usually able to withstand direct attack, although they might fall to lengthy and costly sieges.  Increased firepower combined with defensive fortifications destroyed attacking formations in the U.S. Civil War and in World War I.

To his credit, President Reagan perhaps instinctively realized that the development of a missile defense system could potentially ensure the survivability of his country.  The idea ran into three major obstacles:  opponents maligned it as “Star Wars” and it became a domestic political football; the available technology fell short of the promise; and it encountered the implacable opposition of the other nuclear superpower, the Soviet Union, which feared that it would destroy the MAD strategic balance.  An effective defensive system would, paradoxically, give the power possessing it offensive dominance.  It would, at least in principle, be able to launch a first strike because its defensive system would protect against the other country’s retaliatory strike.  This was the rock on which the discussion of nuclear weapons elimination at Reykjavik broke.

The Soviet Union was correct in fearing a U.S. missile defense system in 1987 and Russia is correct in continuing to fear it today.  Any steps that risk providing one country with first strike dominance threaten to destabilize the MAD system, which, whatever its dangers, has deterred nuclear war for decades.  Yet there is no path toward nuclear disarmament, or even toward a level of nuclear armament that provides reasonable hope for survivability, that does not go through the development of defensive systems.  The political challenge is to develop such systems cooperatively and to reach agreements that phase them in as offensive nuclear systems are being phased down or out.  The end goal would be the realization of a defense-dominated strategic system.