Why NATO's Enemies Should Fear the Meteor Aircraft-Killer Missile 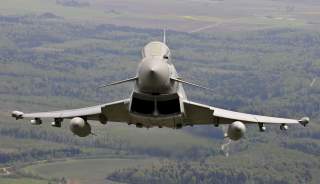 The British Royal Air Force’s (RAF) potent Eurofighter Typhoon multirole fighter is about to receive a powerful new weapon—the long-range Meteor air-to-air missile. The new ramjet-powered radar-guided missile is by most measures the single most capable air intercept weapon in the NATO arsenal.

“Our squadron is going to be the lead squadron for the integration of Meteor,” Wing Commander Chris Hoyle, commanding officer of the RAF’s 1(Fighter) Squadron told me during Exercise Atlantic Trident 17 at Joint Base Langley Eustis in Virginia last week. “Meteor’s IOC [initial operational capability] I believe is in late ’18. We start the work up for the tactical development of its employment in early ’18. We’ll have all the software loaded on, we’ll start to develop tactics that we’ll release to the force by the end of that year.”

The addition of the Meteor massively boosts the Typhoon’s air-to-air prowess. Especially in combination with the Typhoon’s outstanding high altitude performance and blistering speed, the Meteor offers incredible range combined with improved radar guidance—though the RAF will not discuss the advancements in that arena.

The key to the Meteor’s range is its ramjet propulsion. “It’s just a more efficient method of propulsion,” Hoyle said. “It’s a slightly slower missile than a pure rocket that’s just going to have a certain burn period, accelerate very fast and then coast. It’s very clever, it’s able to use all of its energy in the most efficient manner based on the range you’re asking it to move forward, so it’s a fantastic weapon.”

Moreover, with its ramjet propulsion, the missile is almost impossible for an enemy fighter escape from over a huge area. “It’s huge,” Hoyle said. “Almost think the no-escape ranges in the area of AMRAAM range. I mean it’s really big.”

The Typhoon—though the airframe was originally optimized for the high-end air superiority role—the jet was always envisioned as a multirole fighter with a potent air-to-ground punch. As Hoyle explained, the Typhoon came into RAF service initially as a replacement for the Panavia Tornado F.3, which was a dedicated interceptor designed to defend the British home islands, but the plan was always for the powerful new jet to eventually receive a strike capability to replace the Tornado GR.4 bomber.

RAF Typhoons initially received an “austere” strike capability in time for the NATO operation to overthrow Libyan dictator Muammar Gaddafi in 2011, which was called Operation Unified Protector by the alliance, but was referred to as Operation Ellamy by the British and Operation Odyssey Dawn by the United States. At the time, the aircraft could only drop GBU-16 Paveway II 1,000lbs laser-guided bombs with Tornado GR.4s providing target designation using their Litening III pods.

The Typhoon has come a long way since 2011, Hoyle told me. These days, RAF Typhoons have integrated the 500lbs Paveway IV—which can guided using inertial guidance, GPS or laser designation or a combination of all three. But the RAF is not going to stop there, the British expect to add a new 300+ nautical mile range cruise missile onto the jet. “In the next 18 months, we’re going to integrate Storm Shadow, which is a U.K. cruise missile,” Hoyle said. “It’s a long range cruise missile, it’s a very capable piece of kit.”

The British are also working integrating a dual-mode seeker version of the Brimstone air-to-ground missile, which incorporates millimeter-wave radar guidance and a new laser guidance system, on the Typhoon for 2018. “Which would give us a highly dynamic, very accurate, low collateral damage warhead for use in urban environments,” Hoyle said.

Thus, the RAF’s Typhoon will remain a potent weapon for decades to come.