Why North Korea Is the Land of Lousy Options 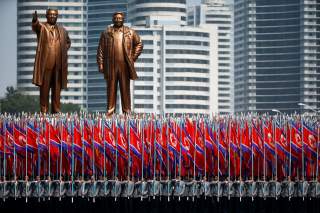 North Korea really is the land of lousy options. Since 1993, when—thanks to their declaration—we first became aware of North Korea’s emerging nuclear capability, we’ve discussed possible military action, we’ve done negotiations in many different formats, we’ve had agreements (e.g. Agreed Framework), North Korea cheated on the agreements, and we’ve applied sanctions repeatedly that are always advertised as “effective this time.” North Korea’s emerging capabilities show how effective we have been.

North Korea has always been able to exploit their worldwide criminal network to continue development of the world’s worst weapons, including VX nerve gas, recently deployed to Malaysia and used in an attack that indicated very sophisticated capabilities. This is less a matter of the last four administrations not “playing this well” and more a matter of a criminal cartel in charge of a nation, enjoying unique immunities to conventional instruments of coercion and cooperation by virtue of a long-standing conventional capability to visit massive destruction on their near neighbors.

What’s next must include enhancing our deterrence with real capabilities, not rhetoric. Arguably such enhancement is best done without chest-thumping rhetoric. We need to look at this from the view of our allies and friends. South Korea and Japan live in a neighborhood that includes now three nations with nuclear capabilities if one assumes, as we should, that North Korea has nuclear capability.

No previous arms limitation treaty has lasted forever. The Nuclear Nonproliferation Treaty may be the next example. Now the urgent task is to establish effective deterrence to ensure our allies and friends retain confidence in our obligations and capabilities.

Deterrence is in the mind of the target of such deterrence. North Korea must believe we have an undoubted capability to prevail. “Prevail” must be defined as the ability to mount a robust and successful defense of the territory, interests and lives of our allies and friends. We cannot allow it to be defined as an aggressive move. We must tell China and Russia that, if they cannot or will not help us restrain North Korea, we will have no choice but to deploy additional capabilities to the region. China and Russia may feel these additional capabilities are destabilizing, but the opinion of our allies must be given far more weight.

Deterrence is also in the mind of our allies, who must believe that we will act quickly and effectively to reverse the present assault on our deterrence represented by North Korea’s continued, long-standing, violations of agreements and sanctions. If, repeat “if,” our allies—particularly South Korea—feel that nuclear capability is needed for effective deterrence, then we must be willing to work toward deploying U.S. nuclear capability to the peninsula. We pledged that “all options are on the table,” and this must be high on the list.

Future threats include the proliferation of chemical, biological and nuclear capability to non-state actors. Some of James Bond’s plots of yesteryear are emerging again in reality.